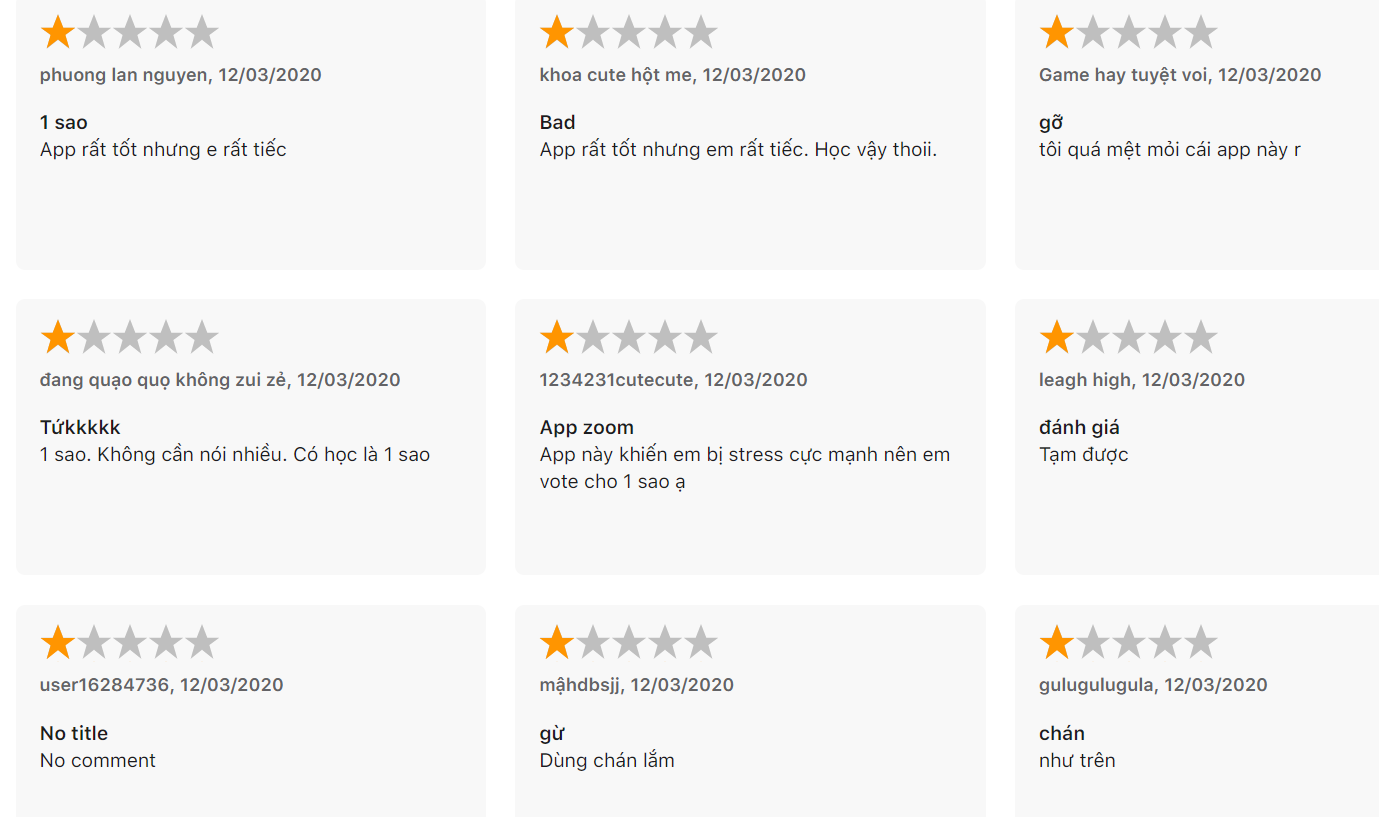 Many students in Vietnam have been giving bad ratings and reviews to a videoconferencing app that is popularly used for remote schooling in times of the novel coronavirus disease (COVID-19) epidemic, hoping to have them removed from app marketplaces.

“[We] demand that the app be erased. We’re enjoying our holiday. We don’t want to study,” is just one among hundreds of negative comments seen under the review section for Zoom Cloud Meetings on Apple’s App Store and Google Play.

Zoom is a remote conferencing platform that has skyrocketed in popularity since the COVID-19 pandemic forced schools worldwide, including in Vietnam, to close indefinitely and move their classes online to avoid spreading the virus.

While students in most parts of Vietnam have enjoyed an uninterrupted school break since the end of the Lunar New Year holiday in early February, the idea of having to log in to an online class from home is not welcomed by some.

On both the App Store and Google Play, droves of negative comments in Vietnamese aimed at the Zoom application have been seen this month, many blatantly admitting the goal of having the app taken down from these marketplaces.

“I hope this app is deleted soon [because] studying online is miserable [and] no one wants it,” one review reads.

“Holiday is holiday: no study!” another reviewer exclaimed.

“Because of this app, we don’t have time to practice basketball [or] tennis,” another review reads.

“The app is good but unfortunately I don’t like to study. So here goes one star,” one user frankly admits in their review of Zoom that accompanies a one-star rating.

A twist came on March 16 when positive comments along with five-star ratings began to flood Zoom’s review section, apparently to counter the previous movement.

“If you guys don’t study, let someone else do,” one such review reads.

“Think of the people [developing] this app before you hit that one-star button,” another suggested.

“They simply think that with a low rating, the app will have to be taken down and they won’t have to study online anymore,” said T.T., a student at Le Hong Phong High School for the Gifted in Ho Chi Minh City.

Since March 18, however, netizens in Vietnam have taken to many social media platforms to call for support for Zoom.

A Facebook page with over 77,000 followers run by students at the Academy of Finance in Hanoi has actively asked for its members to help save Zoom by leaving positive ratings and reviews to improve the app’s overall rating on the app stores.

“I feel ashamed for all of you. You guys are young and well-educated people but act like spoiled children,” said L.T.T.T., a student at the University of Architecture of Ho Chi Minh City.

“Don’t you know that your actions disgrace the hard work and great minds of the developers who built this app as well as those of your teachers who design school curricula and write textbooks in order to educate and raise you into better humans?” T. asked rhetorically.

Students in Vietnam are not the only ones to have attempted to have schooling apps removed.

DingTalk, a video conferencing platform developed by China’s Alibaba, received more than 15,000 one-star ratings on the App Store on the evening of February 11, lowering the overall rating of the app from 4.9 down to 1.4 overnight, according to Business Insider.

“I think the only reason the students give [the app] one-star ratings is [due to their] desperation to find an excuse not to study,” he said.

Currently, Zoom is one of the most popular apps used for online teaching by schools in Vietnam along with Google Meet, Skype, Zalo, or Facebook.