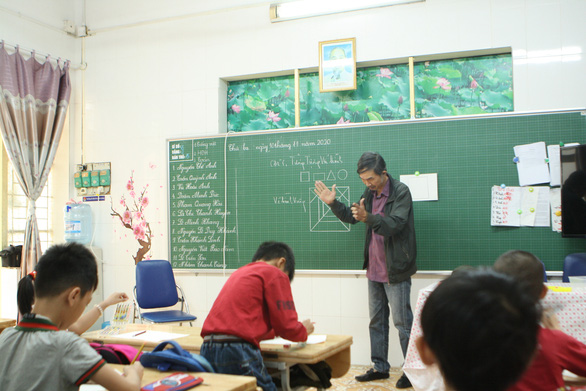 Two teachers at a school in Hanoi, where they have spent nearly two decades helping children with physical disabilities express themselves and improve their conditions, have come to realize they not only teach but also learn from these special students.

Many students at Xa Dan Middle School, located in Dong Da District, for children with hearing and speech defects are now one step closer toward their goal of discovering a new side of themselves.

Ordinary as they may seem, their academic achievement and new-found self-confidence mean the world to them, their families, and the teachers who are credited for their selfless dedication.

A place to call home

“My only wish is customers will keep coming back and making multiple purchases of my children’s artistic items out of appreciation rather than compassion once the kids are ready to step out into real life,” said Duong Tu Long, a teacher who has called Xa Dan Middle School home for the past 20 years.

Constantly doing his best to share in his students’ lives, Long is not only a teacher, but also a friend, mentor, parent, and grandparent.

With most of his students having hearing and speech impairments, Long gives detailed instructions during his art classes in sign language and with his whole heart.

Most of the kids require special attention, with a hyperactive student frolicking from desk to desk during class while another hits his friend, leaving the latter sobbing noisily.

That is when Long feels most needed, he steps in, soothing the children like a parent.

There was one occasion when one of his students suffered an attack of diarrhea.

As the child’s parents failed to show up until sometime later, Long gave the child a wash himself and dressed the child in clothes borrowed from students from another class.

The veteran teacher shared that he takes on the role of a parent who is willing to attend to every single need of his underprivileged children.

He revealed it was curiosity, instead of compassion, that first drew him to these less fortunate kids.

“There was something about this school that had me intrigued,” he recalled.

“I was eager to find out how these kids communicate with the outside world given overwhelming hurdles, how I may end up needed, and if my support can bring them any positive change.”

He added it was this nagging question that inspired him to commit himself to the job each day.

Long said he takes it upon himself to do research on teaching children with special needs and invents more captivating ways to deliver knowledge to his students.

“What physically challenged children lack are real-life experiences. That’s where I step in to teach them the real-life content and resources which will be retained for the rest of their lives and will get switched on and tapped into when they need them,” Long explained.

To do so, the seasoned teacher builds his own special teaching aids to introduce his students to conventional concepts before intensifying their perceptions by the use of pictures, body language, and much-needed exposure to reality.

With his students’ disabilities not limited to hearing and speech, Long has come to diversify his teaching methods to apply to students with other kinds of impairment.

A treatment the elder teacher, whose creativity seems boundless, uses to help his visually impaired students is sounds, with Long himself engaged in realistic simulation to arouse their imagination.

He was held spellbound when one of his blind students came up with an exceptionally lifelike painting of a buffalo bathing in a ditch despite being unable to see one.

However, not every student is artistically gifted or passionate about art, Long said.

For some students and their families, who seemingly give up hope on their children, simply being able to express themselves by the use of colors and shapes is a much-needed boost they all need in their life.

Many of Long’s students have greatly improved their condition and some even graduate from college and land stable jobs.

Others have also been able to have their own family and integrate into the society.

All are thankful to Long for his mentoring and support.

For Long, the appreciation is reciprocal.

“Let’s imagine a place where kids rush to give you a big hug to welcome you each day. This is where I belong,” he said with a contented smile.

No heart for goodbyes

Like her colleague, Long, Trinh Thi Lien has forged deep connections with the school and the students for the past 17 years despite multiple occasions, when she was offered better-paid jobs.

“My friends and family can’t figure out why I just stay on at the school for physically challenged students despite the low pay, hard work, and lack of attention from students’ parents,” Lien said.

The teacher shared through tears though she submitted her resignation several times, she just cannot leave her beloved students behind.

She was on the point of leaving after being recruited by another state-owned school, but she declined the job offer.

There are reasons why Lien has lingered on at the school.

“Children with hearing and speech disabilities typically find it hard to pour their hearts out. It may take me up to one year to befriend and gain trust from a new student,” she shared.

“It’s like one stumbles around for the key to their tightly-shut world.”

This communication hurdle has kept Lien on edge as she fears it would also take her replacement a while to be on friendly terms with the children.

“The kids may also feel forlorn and marooned if I leave them. This thought has tied me to this place so far,” Lien explained.

There are some special students whom Lien finds it particularly hard to part with.

Once, when Lien was planning her job change, the father of T.L., one of her third graders, came for her.

The father said his girl was being stubborn, disobedient, and even rebellious at times, explaining his wife had little time for her while he himself was at a loss what to do.

Unable to stay out of their affair, Lien shrugged off her intention of giving up the job and tried to make friends with the little girl.

Lien later found out the girl yearned for love and attention from her mother.

Once they became close friends, the young girl found Lien as someone she could count on for an emotional outlet.

Another student, L.D, also refused to open up to others when she first entered the school.

It took Lien remarkable patience and several months before she could finally get the little girl talking.

All of Lien’s efforts have paid off.

T.L. has now graduated in economics and settled down with her own family. She keeps her beloved teacher updated on all of her milestone life events.

L.D. is currently studying at a local art college.

“She sometimes gifts me her paintings and even a comic book of her own making. I’m always flattered by their presents,” Lien shared.

“Such cases are motivations for me and help confirm what a right decision I made in not resigning and walking away from the kids.”

As a number of her deaf-mute students also have psychological disorders, they make little progress in their studies.

The teacher, as well as the students’ parents, should learn how to accept their progress no matter how limited it is and not to expect too much of the kids.

Lien believes nothing is impossible with patience, faith and love, and she wants to instill the idea in her students.

“Whenever I have a new class, I always hang a painting featuring an ant carrying a heavy stick of burning wood, and tell my students to give it their best shot and make the impossible possible,” she shared.