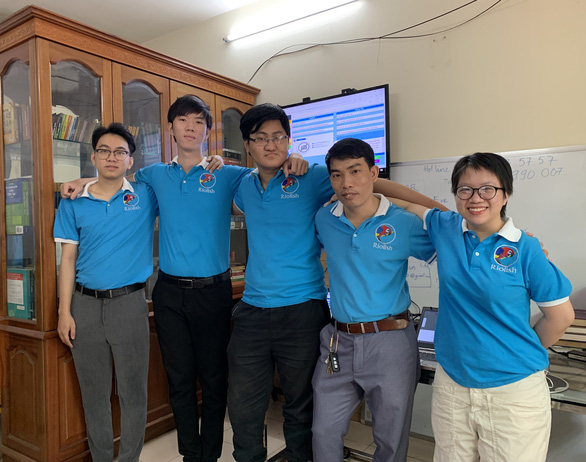 Huynh Tan Canh, 38, would have led a different life if he had a popular choice as others, being an employee with a much higher salary at a big company.

But he did not do that just because of his self-imposed promise made when he was poor.

Canh, who came from the outskirt district of Can Gio, Ho Chi Minh City, has run into several challenges in life.

He had to sell a house after his first start-up project failed. He got a divorce partly because of that failure.

He once thought of the worst things that he could do to release himself from all of those troubles in the past.

Fortunately, he could start over and overcome such obstacles over time.

Trying to learn at any cost

Canh is now the co-founder and director of Vinh Danh Education Consulting Company with 10 employees.

Their 40-meter-square office has been based on the street of Chu Van An, Binh Thanh District, Ho Chi Minh City for the past four years.

Canh lives in the company’s headquarters to save money despite the space being rather small.

In fact, he does not care much about the limited conditions at the moment. He has just tried his best to figure out ways to raise the employees’ income and improve his virtual English teaching assistant, Riolish, to turn it into a more popular educational application.

Why did Canh choose to start up with a company teaching English rather than any other?

To answer this question, one may want to know more about what experiences he got when he was a poor resident trying to change his life after having a chance to study abroad.

Canh was well known as a good and diligent student when he was in college.

He graduated from both the National Academy of Public Administration and the University of Information Technology under the Vietnam National University Ho Chi Minh City.

Having two degrees, Canh still desires an opportunity to master English, a subject he found impossible to improve because of his living conditions before.

Knowing that he could secure a full scholarship to study at the Swinburne University of Technology in Australia, Canh believed that was a valuable opportunity that he was not allowed to miss.

For the whole year 2009, he traveled 60 kilometers by motorcycle from Can Gio to the center of Ho Chi Minh City three times a week to learn English. He was both working and learning like that for a year.

“I often went to my aunt’s house to eat something after school, then I went to bed, get up, and drive back to Can Gio at 4:30 am the next day to be able to go to work on time,” the man recalled.

“Sometimes I had to drive back right away, arriving at home at midnight strained me."

During those days, Canh yearned badly for an application teaching English but he could not find any. He dreamed of creating an app that met the demands of the people like him.

He spent most of his salary on English tuition those days.

Thanks to his studiousness, Canh could get an overall IELTS score of 6.5, which was enough for him to get a scholarship to Australia.

He lost weight remarkably because of such efforts. He was just 48 kilograms at the time he went abroad to study.

Educational opportunities for everyone

Returning to Vietnam after obtaining a degree in Australia, Canh worked for a big company with a high salary.

He gave up the job after around three years, however, because of a promise before: helping poor children study English well.

It is never easy to launch a company.

Canh had to sell a house to pay the debts. He had to say goodbye not only to some of his co-workers but also to his wife, who could not continue sharing his dream of a start-up.

He underwent such a difficult period that he sometimes smoked much more than eating. He even thought of the worst options that he would take then.

“What pulled me out of such trouble was the support from my mother and some of my closest friends,” recounted Canh.

“I found myself still lucky with such encouragement; in addition to that, I still have to make good on my pledge to the poor children."

Riolish has had nearly 200 lessons since the end of 2019. The app has both versions for iOS and Android systems.

Around 20,000 users have been learning English with Riolish for the last seven years, most of them school and college students.

Canh intends to create more educational products at a low price that would be suitable for learners who live in remote areas.