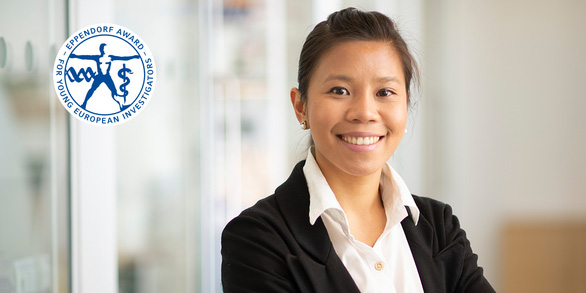 A Cambridge University lab biologist has become the first Vietnamese to claim the Eppendorf Award for Young European Investigators under the age of 35.

Dr. Nguyen Thi Hoang Duong received the award for her work on the structure and function of two RNA-protein complexes, spliceosome and telomerase, that are essential for all higher organisms, according to Eppendorf Corporate, which presents the honor.

Her research provides a fundamental understanding of the structure and function of these complexes and is expected to have a lasting impact on the future knowledge of RNA processing and genome stability.

Dr. Duong received the award on Tuesday this week.

She is currently working at the MRC Laboratory of Molecular Biology at the University of Cambridge in the UK.

Her award-winning work is the result of 16 years of research.

First established in 1995, the Eppendorf Award for Young European Investigators honors outstanding works in biomedical research and provides support for young scientists in Europe up to the age of 35.

The award is presented in partnership with the scientific journal Nature.

Dr. Duong is the first Vietnamese and the second Asian to be honored with the prize in its 27-year existence.

The judges are renowned scientists, including the president of the European Institute.

The winner of the prize also receives EUR20,000 (US$20,353) in cash and has the opportunity to have their research published in Nature.

Duong, who was born in 1987 in the central Vietnamese province of Quang Ngai, won a full scholarship to attend Wellington Girls' School in New Zealand for high school after completing the ninth grade.

She went on to obtain full undergraduate and graduate scholarships to study chemistry at the Australian National University.

She was granted a PhD scholarship to Trinity College under Cambridge University, after completing her master's degree.

After earning her doctorate at the age of 26, she began working at Cambridge University.