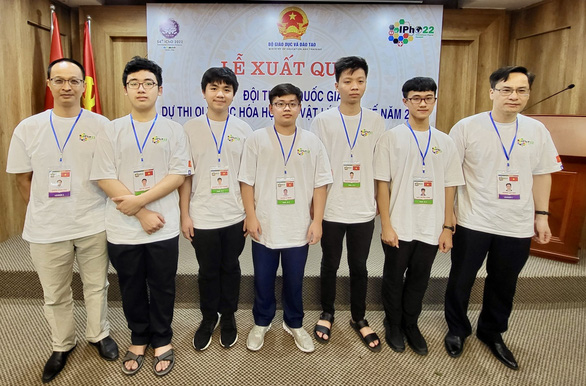 The Vietnamese team won three gold medals, one silver, and one bronze at the 2022 International Physics Olympiad, of which one gold was grabbed for the first time by a 10th grader, according to the education ministry.

The three gold medals went to Vo Hoang Hai, a 10th grader, Vu Ngo Hoang Duong, an 11th grader, and Le Minh Hoang, a 12th grader, who are all from the High School for Gifted Students in Natural Science under the Vietnam National University - Hanoi, the Ministry of Education and Training said on Saturday.

Hai has become the first Vietnamese 10th grader to claim a gold medal at an international physics Olympiad, the ministry said.

The five-member Vietnamese team ranked fifth out of 77 teams consisting of 368 students from 75 countries and territories at the 2022 International Physics Olympiad, hosted online by Switzerland from July 10 to 17.

Vietnam placed after China, Romania, South Korea, and the U.S..

This is the third consecutive year that the International Physics Olympiad has been held in an online format because of the impact of the COVID-19 pandemic.

As an annual international physics competition for high school students, the first IPhO was held in 1967 in Poland and it has gradually expanded to over 80 countries.

The IPhO’s main aim is to test the highest level of knowledge, critical thinking, problem solving, right practices of presentation and analysis, and hands-on skills in theoretical and experimental physics, as said on its website.