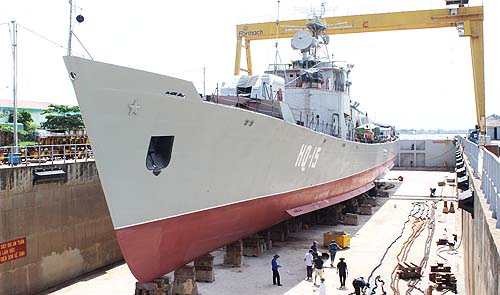 The Hai Minh Shipyard, or X51, has been the dock for repairing and building state-of-the-art warships for the Vietnam Navy for several decades.

It is located at the confluence of the Saigon and Xoai Rap rivers, just 15km from the hub of Ho Chi Minh City.

Recently, the dock was upgraded so it would be able to receive and offer technical repairs for the Dinh Tien Hoang and Ly Thai To – two Gepard class 3.9 frigates commissioned by the Vietnam Navy and manufactured in Russia.

The X51 dock can receive ships with displacement of up to 5,000 tons.

It has built six tuna shipping vessels which were exported to France, and the fast attack ships Molniya commissioned by the Navy this year.

Now, the anti-submarine ship HQ-15 is sitting in the dock for an overhaul of the weapons compartment and refrigeration and propulsion systems.

“This time, X51 has to hire foreign experts for synchronous adjustment between the weapon launchers and the gas turbines of the engines,” said Major Pham Van Tuan – head of the technology department at X51.

“The warship generally requires usual repairs, and they must be urgent. If sent abroad, the cost may surge up to two or three times more than doing it at home,” Tuan added. “HQ-15 is a kind of anti-submarine corvette with a complicated sonar system. Its attack weapons include the torpedo tubes.”

At the other dock at X51, a minesweeper sits on the dry dock, and another one waits outside the port.

“Vietnam now has four minesweepers of this kind, and X51 is in charge of repairing them. Vietnam is the only nation in Southeast Asia that has them,” said X51 political commissar Tran Van Thu.

“The stands to keep the sonar system aboard the minesweepers need to be repaired. This is the first time the item has been worked on in Vietnam. The ship must be lifted up seven meters above the ground to repair it, but current equipment in Vietnam can only lift it up no more than four meters.”

But Engineers at X51 are not allowed to give up. Any problem has a solution, he confirmed.

Vietnamese engineers have previously succeeded in correcting problems like this.

Years ago, a warship had a problem with its secondary machine, as the gears broke down after only two-three months of operations. At first, the ship was meant to be returned to the manufacturer as it was still under warranty.

“But occupational curiosity urged Vietnamese engineers to disassemble the engine and it took them a week to find out that the concentric geared axel of the cog-wheel of the engine and a pump didn’t match together.

After the repair, it has been working well for six months, he said proudly.

X51 has engineers who live on rewards for their initiative and invention, not salary. They included men like Tam, Chau, Uoc, Luc, Hao, Luan, and Tuan.

Senior lieutenant colonel Nguyen Van Luan, the manager of the mechanics factory, has invented many machines to aid the building and repairing of warships, such as a 500 ton squeezer, a 200 ton steel curving machine, and a machine to bend large metal tubes.

He has also created winches to lift ships.

From the first repairs of cargo ships weighing less than 1,000 tons 37 years ago, the engineers at X51 have made long strides in their ability to repair 5,000 ton ships and even warships.

“We have been assigned a new task of preparing knowledge and infrastructure to be able to repair the Russian made Gepard class 3.9 frigates,” said Thu.

The Gepard 3.9 frigate is designed to engage surface ships, submarines and air targets, as well as to perform escort and patrol tasks. It has a displacement of 2,000 tons, a length of 102 meters, a maximum speed of 23 knots, a crew of 103 and a cruising range of 5,000 miles. It is armed with anti-ship missiles, three gun mounts, an air defense artillery system, 533mm torpedo tubes, and a naval helicopter in the aft dock.