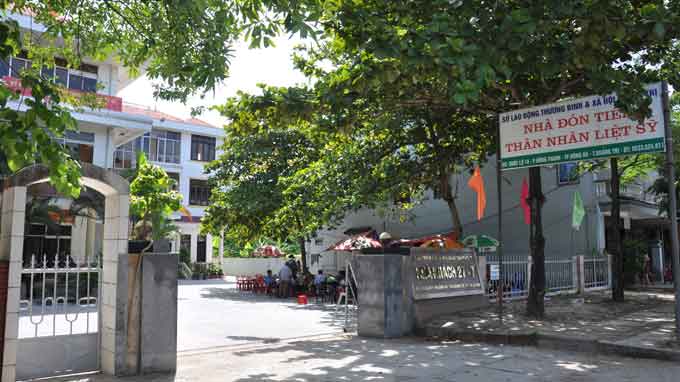 Over the past many years, the 27-7 guest house in central Quang Tri province and the staff there have provided shelter and invaluable assistance to war martyrs’ relatives who come all the long way to visit their loved ones’ graves or continue the long-running search for their remains or anonymous tombs.

Built on a shabby old house with a “bach dan” (sandalwood tree) area more than 20 years ago, the 27-7 guest house, located on National way No. 1 and built in 1997, housed only 50 beds back then while martyrs’ relatives flock to the area in some ten thousands every year. Among the wartime battlefields, Quang Tri is the most sought after for the deceased soldiers’ remains or anonymous tombs.

A few years later, to cater to the overwhelming demands, a philanthropist donated funds to build another three-storey, 50-bed house and a 15-seat van to transport the relatives.

With more investment from the local government and philanthropists’ donations, the house is now more spacious and better equipped.

However, many relatives have to sleep several nights on the floor or hammocks as there still aren’t enough beds to go round.

According to Le Van Dang, former deputy head of the provincial culture department and head of the house in its infancy, several years ago, only those who have found their loved ones’ tombs were eligible to free, restricted accommodation and transport. Those who haven’t paid their own fees. Now they are also assisted in some way to search for their loved ones’ remains or tombs.

“After almost 10 years running the house, I realized that though suffering overwhelming losses, the martyrs’ relatives are so humble and grateful to our welcome and assistance,” shared Dang.

Retired colonel Nguyen Duy An sincerely thanked the staff there for helping him locate his comrade’s tomb after the 45-year search.

Along with his comrade’s younger brother, Colonel An has visited several times the battle field where the man perished but managed to garner limited information.

Now, with the help of the house administrators, An located his comrade’s tomb, but still awaiting DNA testing to confirm the remains belonged to his friend.

The house has thus provided accommodation and simple meals to the anonymous, deceased soldiers’ relatives while its administrators spur them on to get on with their search.

House director Nguyen Minh Hoan said that Quang Tri province alone houses 20,000 tombs of anonymous martyrs, which means the efforts to identify them would be endless.

Two years ago, the Ministry of Labor, Invalids and Society built another guest house for VND13 billion (US$616,207) and has around 150 beds. However, supply still falls far short of demands, as the house receives some 400-600 visitors each day at peak seasons.

Accordin to Hoan, despite the huge number of visitors and heavy workload, the staff of only 21 members each work 300-400 hours overtime each year, which exceeds what is stipulated by the Labor Law by half. The staff members don’t get paid for their overtime time. Several who have worked at the house for five or six years get less than 1 million (US$50) a month.

“Though the pay is meager, we keep heartening ourselves to try our best and help the anonymous martyrs’ relatives locate them and their tombs in the quickest of time,” Hoan added.