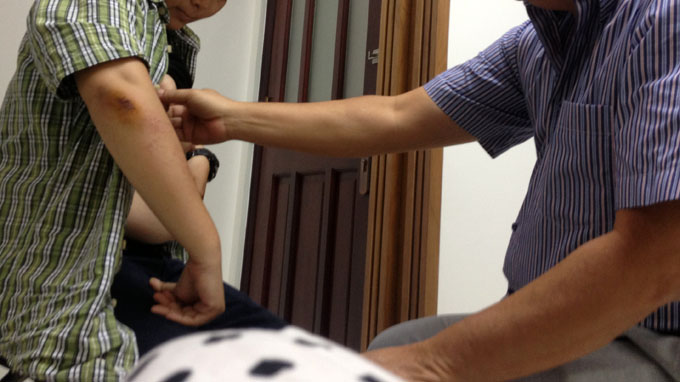 Transgender people in Vietnam – P3: No pain, no gain

Some work hard to earn money to undergo gender reassignment surgery in foreign countries; some choose to cut off their genitalia; some even agree to exchange years of their lives for the chance to live as their desired gender.

Although the gender reassignment surgery process requires preoperative psychological counseling and health examinations, such services are not available in Vietnam, where transsexual surgery is not legal. Thus, local transgender people have created their own community in which they share their experiences to gain knowledge and understanding of the process.

According to Lo Lo, 34, a trans woman, a general transsexual process consists of taking hormones and living as the desired gender over the course of 2 years, then undergoing a psychological test before surgery. However, not many transgender Vietnamese follow those steps. Many friends of Lo Lo call to make a reservation for surgery in Thailand, then take a short trip there for surgery, returning to Vietnam soon after.

This simple process leads to a number of regretful consequences.

Bao Chau, a trans woman in Ho Chi Minh City, has a typical story of the agonizing journey to find herself. After returning to Vietnam from Thailand after surgery, she was too ashamed to go to a hospital to get the proper post-surgery care.

“I hired a nurse to take care of me and my new vagina at home. Sometimes the wound would become infected and bleed, and I was forced to be hospitalized, my life hanging by a thread,” Chau recalled. “I hoped my new vagina would be fine so that my all pain wouldn’t be in vain.”

“It was a thousand times more painful than death,” she emotionally remembered.

Lo herself is taking contraceptives and injecting herself with hormones every three months to preserve her female body.

“Since the day I started taking pills, my skin grew darker and covered with acne. I also cry and get annoyed easily. Some of my friends have fainted after injecting hormones, while others are too skinny because they diet to look like girls,” Lo shared.

Those who cannot afford the transsexual surgery fee in other countries are often forced to make the transition slowly.

“My friends usually transform part by part. Trans men often want to remove their ovaries to avoid periods. A friend of mine underwent an ovary removal surgery which cost VND10 million (US$472). If we give them enough money, some doctors will agree to diagnose us with breast cancer so that we can be granted a mastectomy surgery,” said Aki Tran, a trans man.

Tuoi Tre correspondents followed Aki Tran, a trans man, and her friend to a cosmetic clinic on Duong Ba Trac Street in District 8. The clinic’s director informed them that he only offers mastectomy surgery and doesn’t give gender reassignment surgery. After checking their breasts, the doctor declared the price for breast removal would be VND30 million for Aki and VND35 million for her friend, and said they could come for surgery the next day.

The two visited other doctors that day, but the price was always higher than they could afford.

Die young – not a big deal

Jessica, also known as Ca, is famous among transgender people in HCMC due to her successful gender transformation.

Since a very young age, Ca has suffered discrimination from her family and friends. Her family didn’t allow her to meet their friends because they felt ashamed of their “son.” They took her to many hospitals and even invited a shaman into their home, hoping to cure Jessica’s “illness.”

“A doctor even scolded my mother and told her that I was not sick,” Ca shared.

At the age of 19, Ca dropped out of college and moved out of her home since she couldn’t bare the discrimination. “I was discriminated against, jobless, and had to perform at funerals, a job that only pede (discriminating term used to describe transgender people) do. In the eyes of others, the reputation of transgender people like me has only grown worse,” Ca said in tears.

After the tough time, Ca learned makeup and hairdressing to earn money for the biggest dream of her life: traveling to Thailand for gender reassignment surgery. Though Ca had already injected silicon into her breasts to reduce surgery expenses, she still had to borrow money for the trip.

In Thailand, with the advice of some friends, Ca visited a doctor named Thep.

“I was scared at first, but the desire to become a girl encouraged me. I believed that dying young was not a big deal, because we’re transsexuals, and we’re daredevils,” Ca recalled.

“I would rather die ten years earlier than live for ten more years with the pain of not being myself,” Ca responded after hearing the rumor that people who cut off their genitals will lose 10 years of their lives.

Ca’s life now is the dream of many transgender people. She’s living as a girl and has a stable job as a makeup artist. Ca said she must make money to pay the debts she owes for her surgery, but is lucky to have a job; many other transsexuals have to prostitute themselves to pay “the debt from their previous life.”