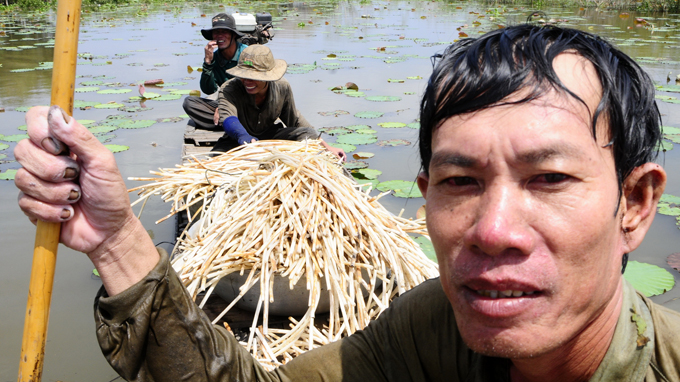 In recent years, the alum-laden land in southern Long An province’s Tan Thanh district, where only cajuput could survive, is now covered with lotuses, but at the cost of the area’s signature plant.

When the yearly flooding season comes in late October, instead of waiting for the flood water to recede to sow the paddy fields, many farmers in Kien Binh, Nhon Ninh and Nhon Hoa communes waded several hours in the knee-deep water to harvest lotus stems.

The harvests earn them good money, and lotus stems are usually in high demand as the stems are popular in Vietnamese cuisine, used in several dishes such as “goi” (sweet and sour salad) and hot pots. The plant part also boasts several medicinal properties such as the ability to stop bleeding and calm nerves.

Locals’ lives have thus seen dramatic improvements, and they are able to send more kids to school and build more brick houses.

Nguyen Van Nhieu, a local farmer, said that between two main rice crops, he grows lotuses as soon as the flooding season comes. When the water recedes, he digs up the lotuses and prepares his fields for rice plants.

Unlike Nhieu, Vo Thanh Tam, another farmer, retains water in his paddies to grow three crops of lotuses a year. He earns some VND100-150 million (up to $7,112) a year.

The high profitability of lotus plants has driven many local farmers to destroy several hundreds of hectares of regenerated cajuput. The few remaining cajuput groves are now intertwined with lotus fields.

Nguyen Van Phuong, a local official, admitted that almost all of the areas in the district where lotuses are now grown were previously assigned for cajuput.

Phuong added that he has repeatedly requested that aid policies and propaganda be adopted to convince farmers to re-grow cajuput in certain places.

According to Nguyen Quoc Viet, from Nhon Ninh People’s Committee, ten years ago, locals would destroy cajuput groves to grow rice, and now they have switched to lotuses. Only 30 hectares of the commune’s land is now used to grow cajuput, which also are at risk of being wiped out for lotuses some years from now.

Do Thanh Hay, a seasoned lotus farmer, said that despite the local plan to preserve the remaining cajuput area, that of Tan Thinh district has shrunk from over 10,000 hectares to 2,700.