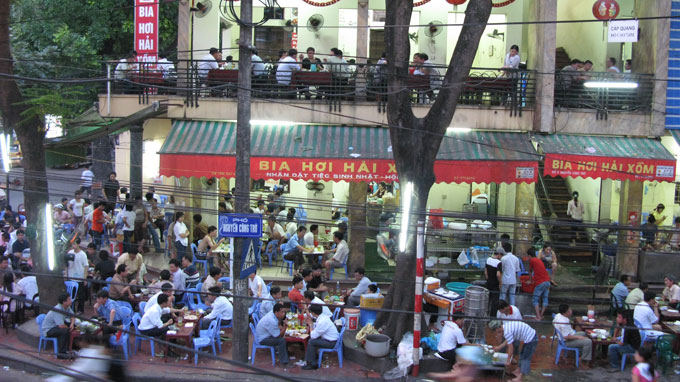 Expats living in Vietnam have tried to figure out why locals drink so much, as Vietnam’s population of some 90 million people consumed around 2.9 billion liters of beer in 2012 and 2013.

Vietnamese people spend around US$3 billion on beer and alcoholic drinks each year and the beer consumption rate per capita is constantly on the rise year after year.

This shocks many non-drinkers and moderate drinkers, including expats.

British man Mark A. Whorlow, CEO of DSA Engineering, said during the six years he has been living in Vietnam, he has seen enough of drinking among locals.

He noted that though British people and Europeans in general do drink during get-togethers or events, they sip their beer or wine mostly to relish the tastes and characteristics or take some small glasses over intimate talks.

“In contrast, many Vietnamese drinkers try to gulp down as much and as fast as possible to show off their ‘drinking skills’. I know one Vietnamese man who can drain down up to 50 glasses at a time and takes great pride in that. What’s worse, his meaningless act can easily urge those on the same table to do the same or speed up to catch up with him, forgetting that they still have to ride their bikes home,” Whorlow observed.

He also put excessive and rampant drinking among locals, particularly youths, to the unreasonably cheap beer prices, with a can of beer costing only 1 USD, and a bottle of beer even less.

By contrast, in the UK, all alcoholic drinks are taxed heavily and are sold only to those who can prove they’re above 18 years old.

Unlike Vietnam, where one can easily buy and gulp down beer, including draught beer or different brands of imported beer, on the sidewalk or almost anywhere, in South Korea, beer is only displayed for sale in supermarkets or licensed beer stores.

Those who sell beer or alcohol to under-20-year-olds will be heavily fined or even have their licenses withdrawn.

In addition, there are groups of people called consumer paparazzi who keep constant watch over beer shops, stealthily take snapshots of those selling ale to under-20s and report them to state agencies for monetary rewards.

Meanwhile, Nozomu Katayama, from Japan, sales director of Sheraton Saigon, noted that though Japanese people also drink quite a lot, they drink mostly at restaurants and pubs, not on the sidewalk shops as they do in Vietnam.

As under-20s aren’t allowed by law to buy or sell beer, people always have to present their identification papers, even at vending machines, to prove that they’re old enough.

“Another important thing is that we Japanese keep reminding ourselves to drink responsibly and not to lose our dignity, as we tend to look down on drunken strays on the street,” he elaborated.

Drunk drivers are also heavily fined from $3,000 to $4,000 or have their driving licenses withdrawn for good. Those in the same car with the drunk driver also face fines for not stopping him/her from doing so.

“Vietnamese people’s excessive drinking, in my opinion, is also due to their being less strict to themselves. Also, four major local beer companies have grabbed the entire market, making it really difficult for foreign beer trademarks to penetrate into,” he added.

Todd Daniel Webe, an American who has lived in Hanoi, also attributes Vietnamese men’s extreme drinking to the work and social pressure they’re usually under.

The pressure is most evident in circles of friends, colleagues and business partners, in which they usually drink more to please one another and get their contracts signed.

Vietnam is the "beer drinking champion" of the ASEAN region, the third in Asia after China and Japan, and in the top 25 beer drinking countries globally with an annual growth rate of 15 percent, in spite of the fact that its per capita income in 2012 was among the lowest in Southeast Asia. On average, each Vietnamese person consumes 32 liters of beer per year.