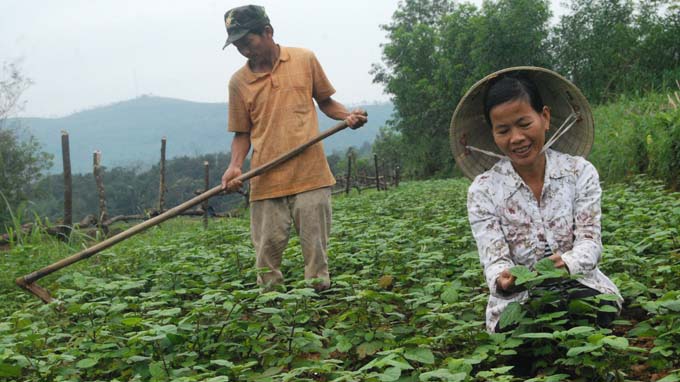 A group of farmers in Quang Nam’s mountainous Tien Phuoc District have improved their lives considerably by cultivating wild medicinal herbs in their home gardens.

After setting up an association in 2010, 16 households in Phu Lam village have successfully grown various kinds of medicinal herbs and improved techniques to adapt the wild plants to different conditions and terrains.

The herbs are capable of curing certain ailments and yield substances that can be extracted to make dietary supplements or alternative medicines.

Le Van Phuc, a member of the Phu Lam medicinal herb farmer association, has grown several breeds of medically valuable herbs, such as “hoac huong,” “mach mon,” and “thien mon,” under the foliage of the fruit trees in his home garden, since they prosper in the shade.

“Cultivating herbs under the canopy of fruit trees is beneficial since we can grow both of them on the same plot and in the shade, and the herbs don’t need regular watering during the sunny season,” Phuc said.

Farmers also successfully experimented with growing “hoac huong,” which has the highest economic value of all the herbs, in alternating patterns with “keo” (Acacia) trees on the fields near the forest.

Their efforts and vision have paid off since the herbs have yielded good crops after two or three years.

However, as “keo” trees turn three or four years old and become too luxuriant for the herbs beneath, some farmers have made even more audacious moves in cultivating the herbs on uncovered plots, thus exposing them to the elements.

“I’m really full of admiration for Thai Thi Hoa, her elder brother Thai Hong Hoi, and his wife, who found ways to grow the herbs near their paddy fields, exposed to the sunshine,” said Le Phuoc, chairman of the association.

Hoi said that in 2013, he and his sister each earned over VND25 million (US$1,199) from “hoac huong” alone. Others in the community also make some VND40-50 million a year from the herb and the sale of its seedlings.

Phuc, the association member, has recently started growing “thien mon” and “mach mon” on uncovered plots, which he said allows him to take proper care of them and produces good crops.

“Though these two herbs fetch lower prices in the market than ‘hoac huong,’ they require less care and can be sold in both fresh and dried leaves,” Phuc shared. “Besides, we want to grow as many of the breeds available in our hometown as possible.”

According to Phuoc, the chairman, more farmers outside the association also plant the herbs in their home gardens.

Sixty percent of the 172 households in the village have grown “hoac huong.”

Though grown in smaller areas, the herb has provided locals, particularly elderly and poor people, with a considerable supplementary income.

Phuoc, as well as other members of his association, are hopeful that they will find more ways to better tap their hometown’s resources of wild herbs.