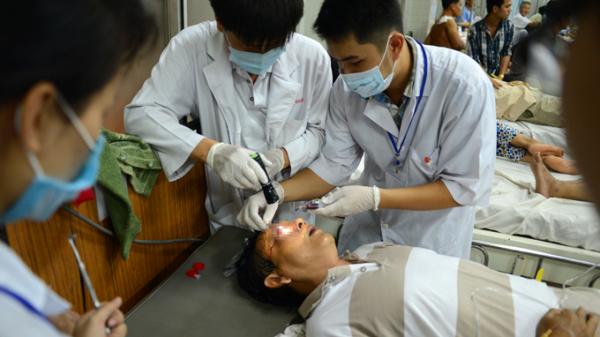 Accessibility to blame for brutal acid attacks in Vietnam: foreigners

An American lawyer who lives in Vietnam and a prospective medical student, also from the U.S., blame the recent cases of acid attacks in Vietnam on the availability of acid and other lethal chemicals on the local market.

In the latest of many acid attacks in Vietnam, Pham Minh Tien, a teacher at a middle school in the Mekong Delta, splashed acid on his colleagues and education officials late last month, enraged by unsolved work conflicts.

All four victims have sustained serious injuries to their faces and eyes.

Three bystanders, including two 11-year-old children, were burned by the acid on their faces and bodies.

Two of the women suffered serious burns, one of whom had rejected the culprit’s romantic advances and was newly engaged to another man.

American lawyer Kevin Hawkins, who works for HCMC-based VILAF law firm, expressed his concern at the alarming prevalence of using acid in attacks, mostly for revenge and particularly in relation to failed romantic relationships or pursuits.

“Such attacks aren’t common in the U.S. or in most developed countries, but are still quite popular throughout the developing nations. I would assume that’s mostly because of the low cost and easy accessibility of acid. The culprits choose the form perhaps also because of the irreparable disfigurement to victims, which is the inevitable result of such attacks with vengeful jealousy-driven motivation,” Hawkins pointed out.

According to Hawkins, vitriol attacks were more common in the U.S. back in the 18th century, but with changing times and stricter legislation, such attacks are now much rarer, though gun violence in has taken its place in that country.

The lawyer also noted that in every U.S. state has its own laws for prosecution of criminal offences, but in general, a vitriol attack would likely be considered an act of aggravated assault and battery if a vial of acid was thrown at someone, and in some cases, attempted murder if the intent and extent of the crime warranted such a charge, for example, dousing someone with more than a liter of acid.

Penalties for the former might range from 10-20 years imprisonment, while the attempted murder charges could be even longer.

In addition to criminal filings, there would also likely be civil litigation which could result in substantial monetary compensation for the victim, provided the attacker had any assets, including any future assets and income earned.

“The ease of purchasing acids in Vietnam, and in many developing nations, is extremely worrying. I have seen reports that sulfuric acid can be purchased at many auto mechanic shops for about US$0.4 per liter, and nitric acid, used by goldsmiths and jewelers, can be bought for US$1.50 per liter. At such a low cost, and with such availability, it is unfortunately easy to obtain such liquids,” Hawkins said.

By contrast, in the U.S., such acids are treated as poisonous and dangerous substances and are not easily accessible to the general public, which considerably deters spontaneous crimes of passion.

The current Vietnamese penal code stipulates that those who use acid to attack their victims face a charge of “intentionally injuring others,” rather than “murder,” which thus fails to discourage potential offenders.

“The punishment for this type of attack should be very harsh, not just because of the physical harm it inflicts but also the emotional harm that lasts much longer and in most cases is even more painful to deal with,” Hawkins noted.

He also urged for stricter regulation of the substances, along with efforts to reach out and educate people, particularly youths, on the lasting detrimental effects of such damage.

They should also be exposed to victims of such violence as a way to try and alter their thinking about using acid as a weapon, the American lawyer said.

Meanwhile, Dylan Bellavance, a prospective medical student at the University of Vermont in the U.S., is of the same opinion as Hawkins.

Two years ago, while doing social work in Vietnam, he was quite shocked at the prevalence and availability of acid.

“I, personally, would have no clue where to get such a large amount of acid in the U.S. Therefore, we may have a more strict law pertaining to acid distribution, though we do have a serious problem with the rampant use of firearms and mass shootings. I feel that whether it’s firearm or acid use, both are very serious issues which should not be taken lightly,” shared Bellavance.

He feels bad for the victims of acid attacks, which can cause extensive tissue damage due to its corrosiveness, and even cause blindness and death.

What’s worse, victims have to live the rest of their lives with the debilitating physical and mental scars.