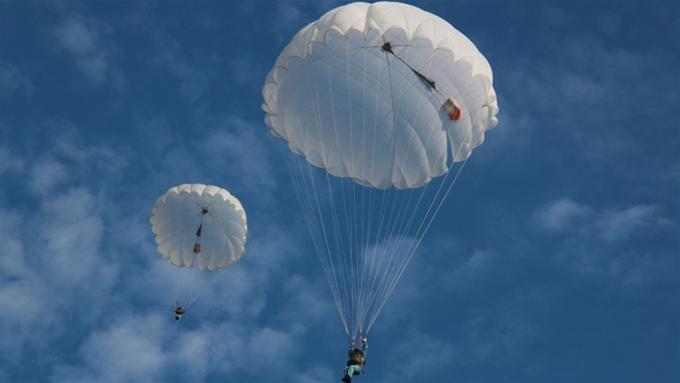 The drill boasted roughly 900 jumps by some hundreds of parachutists, including the school’s officers and students and those from the Air Defence – Air Force Service; 954 Air Force – Navy Brigade under the Navy Service; 198 Anti-terrorism Commando Brigade, Military Zone 7, and Southern Aviation Club.

By 5am, the school’s parachute jumping ground was ready for the drill.

After the Mi-8 helicopter hovered over the ground for some 10 minutes, officers on it determined the height, center (the T-shaped pole with a wind pipe erected in the middle of the ground) as well as wind directions.

A sandbag weighing some 30kg was thrown from a 800m height. Pilots on the helicopter adjusted where to drop the parachute jumpers dependant on the distance between the sand bag and the center.

Each helicopter flight carried around 20 jumpers, divided into four turns of jumps.

The white parachutes opened wide just like full-bloomed flowers on the sky, with the stunning Nha Trang Bay beneath.

According to senior lieutenant-colonel Nguyen Nhu Thai, dean of the school’s parachute faculty, in such a drill, students typically make two jumps, while aerial officers aged under 35 make one.

“Though aerial officers are proficient in parachute jumping during their training, we require that they jump every year in order not to forget the maneuvers and skills, while enhancing their braveness and prompt, precise response in times of emergency at work,” he explained.

“We feel slightly overwhelmed upon jumping out of the chopper, but as soon as the chutes opened, the feeling is indescribable, as the chute jumpers can enjoy a gorgeous panorama of the city, while steering their chutes towards the center. Looking from beneath, the chutes look just like cute white flowers, so we liken April to the blooming ‘parachute flower’ season,” shared lieutenant-colonel Le Xuan Hoan, another veteran parachute instructor from the school.