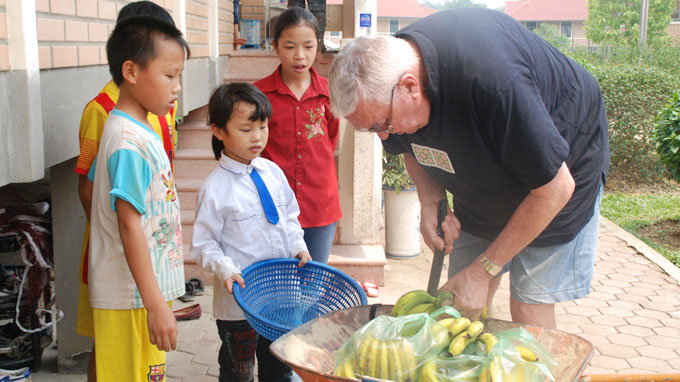 Especially interested in the 1954 Dien Bien Phu victory, a prominent triumph during Vietnam’s resistance war against the French colonialists, an elderly Australian man has spent five years in the northern province of Dien Bien to help needy locals.

Born in 1954 in Queensland, Australia, Nev Tickner traveled to Vietnam in 2009 after several trips to Malaysia and Laos.

Fascinated at the glorious Dien Bien Phu victory, he was immediately struck with Dien Bien Province, where he finally decided to “land” and soon grew attached to the people he met.

In the past five years, Tickner has stayed in a 20m² room in Muong Thanh Hotel in the provincial capital Dien Bien Phu City, which is only large enough for a bed, a fridge, and a shelf packed with books on legendary late Vietnamese General Vo Nguyen Giap, whose role was instrumental in the Dien Bien Phu victory.

On his wall hangs a photo of late President Ho Chi Minh and a certificate conferred by the provincial Red Cross Association in recognition of his notable philanthropy.

Keen on history, committed to people

His long-cherished dream of visiting the historic land came true when he arrived in Dien Bien in 2009.

Due to language barriers, he did not get to know anyone and was thus confined to his own world.

One afternoon, while he was doing his morning exercise on the street, Tickner bumped into Dang Viet Dung, who was then a receptionist at Hanoi’s Dien Bien Phu Hotel and is now vice director of Muong Thanh Hotel.

The two were soon on intimate terms. Through Dung and several friends Tickner made later, he learned about the current lives of soldiers who fought in the 1954 Dien Bien Phu battle.

He then visited Noong Nhai village in Dien Bien District’s Thanh Xuong Commune, which was home to Black Thai ethnic minorities and was reduced to ashes during the high-profile battle.

“I have read extensively on the Dien Bien Phu battle, but always yearned to seek the truth. I came here and found the truth I’ve been searching for. Some 444 people—mostly the elderly, women, and children—of Noong Nhai village were burned by the French troops,” he recalled.

“I then asked Dung what I could do to help during my stay here. He brought me to the Dien Bien SOS Village, where 46 disadvantaged children live,” he recalled.

Tickner’s stay has since ceased to be tedious and lonely. Apart from learning about the Dien Bien Phu battle, he has visited the SOS Village and later the provincial Social Welfare Center on a regular basis.

The 60-year-old man plays with the kids, teaches them English and showers them with gifts.

Sometimes he holds sports competitions and organizes trips and swimming classes for the kids.

Tickner also buys pigs and chickens for the kids to raise in order to earn some money.

Over the past five years, Tickner often returned to Hanoi to renew his visa.

“I have three children and seven cute grandchildren back home in Australia. But as soon as I met the kids from the Dien Bien SOS Village, I realized I’ve doted enough on my own children and grandchildren. I’ve been to many places and met many kids, but perhaps Dien Bien is where I most yearn to return. My Vietnamese ‘grandchildren’ here really need my love,” he shared.

“We really love him. He awards us with clothes and books when we do well at school, and yells at those who are misbehaving or lazy. When he’s away for just one month, I’m really sad and miss him,” said Ca Thi Thuan, a kid from the Dien Bien SOS Village.

Every week, Tickner takes time to visit the kids and his needy friends who fought in the Dien Bien Phu battle.

Once his pension began running out since he was buying so many gifts for the kids and his veteran friends, Tickner began selling different items including dried meat and wine to supplement his income.

“Wherever I’m traveling and whoever I meet, I always tell them about the kids. I also share the photos I take of the kids on my Facebook page. I’m not surprised that my friends keep sending the kids gifts, as everyone who knows about their distressing circumstances would certainly do so,” he noted.   One of Tickner’s special friends is Binh, who lives near the local Muong Thanh Market.

Through an interpreter, Tickner learned that Binh is a Dien Bien Phu veteran, whose wife and daughter died. He lived with his 18-year-old, mentally-challenged grandchild in a shabby tent erected at a corner of the market.

Two months ago, Tickner bought plane tickets for Binh and his daughter to return to their hometown in northern Thai Binh Province.

He also bought Binh a cart for him to use to sell grilled meat for a living.

“I considered committing suicide several times. Fortunately, I met Nev. He’s a really good guy, to whom my grandchild and I are deeply grateful,” Binh said in tears.

The two friends meet almost every day and always give each other warm hugs and taps on the shoulders, speaking cordially in their own languages.

Tickner also pays visits to Nguyen Xuan Truong, another veteran. Truong often tells Tickner long stories of the Dien Bien Phu battle, which he fought in. The Dien Bien Phu campaign, which lasted 55 days, was the most decisive battle in Vietnam’s resistance war against French colonialism.

Vietnamese and French troops fought against each other in the battle, which took place in Muong Thanh District, Lai Chau Province, which is now Dien Bien Province.

The French were completely defeated and surrendered on May 7, 1954.

The country held a host of activities to celebrate the 60th anniversary of the Dien Bien Phu victory last week.