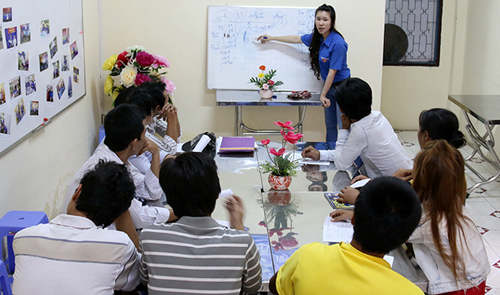 Upon being launched last year, the program was expected to become a new method of helping addicts abstain from and cleanse themselves of unhealthy substances. Previously, addicts were ordered by local authorities to join compulsory detox programs in rehabilitation centers.

After a year, the pilot project of voluntary detoxification at the Drug Detox and Advisory Center belonging to the HCMC Department of Labor, War Invalids, and Social Affairs has seen only six addicts complete the three-month program, the longest rehabilitation period offered.

Seventy-five percent of addicts have left their programs before completion.

In the past year, the center received 134 addicts, 100 of whom left the program unfinished.

The new model of drug detoxification

Addicts voluntarily register to enter the center, select the period they wish to stay, and pay for the entire cost of treatment.

An addict can decide to leave the center whenever he or she likes. Caretakers can give them advice, care, and treatment but have no right to detain them against their will.

Most addicts agree to join the program under pressure from their families. Many of them have left and returned to the center multiple times.

One such addict, T.Q.T. of District 5, admitted, “My mom gave me money and asked me to come here to abstain from drugs.

“I finished a three-month program and am planning to stay here longer to ensure I am completely free of my addiction.”

Most addicts say this is a “five star” center.

“Medicine for treatment is effective, and doesn’t cause side effects,” he added.

Unfortunately, T.Q.T. is one of only six people who completed the detox program over the past year.

Most addicts who come to the center opt for the shortest period of treatment – just 15 days. However, the majority of them stay for only a week.

“It is their prolonged use of drugs that makes it harder for them to abstain,” said T.Q.T. “Here, addicts suffer from anxiety and depression, aggressive outbursts, fatigue, agitation, nausea, and vomiting.”

A guard at the voluntary center added, “Most addicts don’t really volunteer to come here but are forced to by their families.”

Therefore, they lack the necessary psychological determination to finish the program.

“At night, we have to take turns patrolling the center to prevent them from harming themselves while detoxing.

“But all we can do is advise and encourage them, not detain them or call the police because participation in the program is voluntary,” said the guard.

The voluntary drug detoxification center is the first of its kind in HCMC, under a plan to replace all compulsory detox centers in the future.

The city now has around 9,000 addicts under treatment at compulsory centers and it is estimated that 4,000 of them will leave the facilities by the end of this year.

One addict, an accountant, has left the center five different times.

The center director, Le Van Quy, refused to admit him after he left for the fifth time.

“He spoke of his determination, but he could only stay 5-7 days while he registered for 15 days,” Quy said.

Without strong psychological determination, an addict cannot rid himself of addiction, he added.

To take part in a 15-day program, an addict pays a total cost of VND3.7 million (US$178), which includes VND2.7 million ($130) for treatment and VND1 million as a deposit in case the patient damages anything belonging to the center.

After leaving the detox center several times, some addicts opt to lock themselves at home and drink alcohol rather than endure the detoxification process.