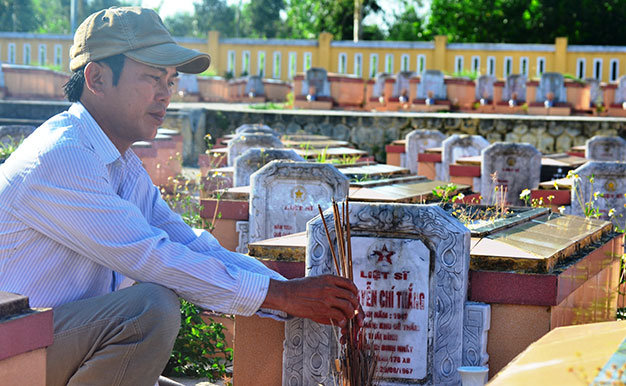 The man who writes letters in search of war martyrs’ relatives

Over the past ten years, a school guard in central Vietnam’s Quang Nam Province has written thousands of letters in search of relatives of war martyrs buried at a local cemetery, which he voluntarily tends.

Nguyen Phuoc Ha, 45, who works as a security guard at an elementary school in the province’s Thang Binh District, has sent over 300 hand-written letters a year to agencies and war martyrs’ relatives across the country over the last decade.

Thanks to his letters, nearly 100 families have found their loved ones’ remains and graves at the Binh Dinh Bac Commune War Martyr Cemetery.

During the Vietnam War, which ended in 1975, particularly during the fierce Dong Duong battle in late 1965, several thousand revolutionary Vietnamese soldiers perished and were buried in the area.

Among the more than 1,000 graves at the cemetery, which is nestled on a mound amidst lush foliage, 503 remain unidentified, and many remain unknown to their relatives.

In 2000, Ha moved in to a small house opposite the cemetery, which was quite unkempt at the time.

To provide solace to the martyrs’ souls, he began cleaning the cemetery and offering incense to the graves.

After watching a program which helps locate war martyrs’ graves, he began his letter writing quest.

Ha began noting down the martyrs’ personal details and their places of birth, and sometimes addresses, as engraved on their tombs.

He started writing letters to the local governments of the areas where the martyrs were born, hoping to get in contact with their relatives. He also wrote to any addresses found on the tombstones.

Ten years ago, when postal services weren’t available in his area, Ha would cycle over 10 kilometers to the nearest post office to mail the letters.

“I anxiously waited and waited, and sent two or three letters. The addresses on the graves may be incorrect or the relatives may have moved, so I got very few replies. But I just kept writing,” Ha recalled.

The first reply he got was from a man living in Hanoi’s Ha Tay District, who came to see him in search of his older brother’s grave.

Upon seeing his brother’s grave, the man knelt down and sobbed.

For the past 30 years, Nguyen Van Toan and his family in northern Ha Nam Province have been desperately searching for the remains and grave of Toan’s elder brother.

Toan, a war veteran, then received Ha’s letter, which gave him and his family new hope in pinpointing his brother’s grave.

Ha and his wife have also provided free accommodation to the martyrs’ relatives who come in search of their remains.

Ha has also volunteered to tend to the cemetery and spends his own money on joss sticks and offerings.

He has also unearthed the martyrs’ remains and given them to their relatives without taking any payment in return.

The communal government has also named Ha the official tender of the Binh Dinh Bac Commune Cemetery in recognition of his notable contributions.