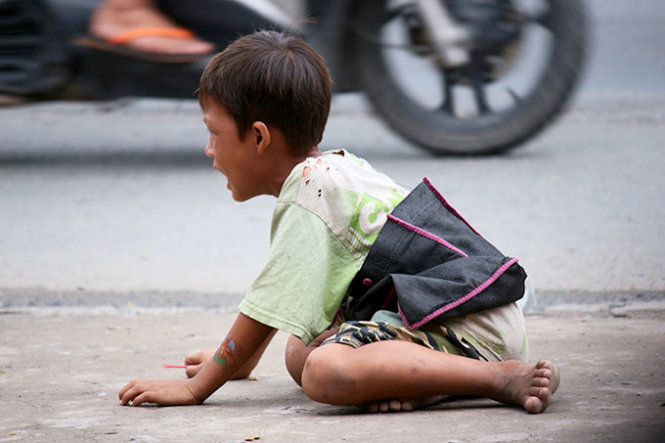 An investigative photo report by Tuoi Tre Newspaper revealed children as young as two have been used to make money for criminal gangs on the street in Long An province, about 60km from Ho Chi Minh City, in southern Vietnam.

Tuoi Tre reporters secretly followed a group of people with more than two thirds of them children. The kids are enslaved and forced to work as beggars at a T-Junction close to Ben Luc Bridge in Long An’s Ben Luc District.

These suntanned, untidily-dressed kids stand at crowded crossroads and rush onto the street to beg for money from passers-by as soon as they stop at the red light.

A group of adults, alleged members of a criminal gang, keep the children in captivity and pocket money earned by the children.

The children are divided in small groups. Each group has three to eight beggars. The oldest is more than 10 years old while the youngest is nearly two.

Each group is supervised by one or two women. The child beggars are usually beaten or scolded by the women if they refuse to beg.

“I really feel sorry for the children because they risk their lives to earn money for adults. The adults pocket any money earned by the children as beggars and use the money to buy lottery tickets or to gamble,” Nguyen Thi Ut, owner of a coffee shop at the T-junction, told Tuoi Tre.

A child is taught how to kowtow and cry to arouse compassion of people around.

Two child beggars beg for money from passers-by who stop at a red light in Ben Luc, Long An.

Child beggars beg for money from passers-by who stop at a red light in Ben Luc, Long An.

While a child beggar lies on the ground, the child's “supervisors” are gambling.

An infant is used to make big money on streets.

A child beggar is passed among many women.

The child beggars are driven to another place.

Most of the child beggars live a nomadic life. In this photo, they take a shower in heavy rain.