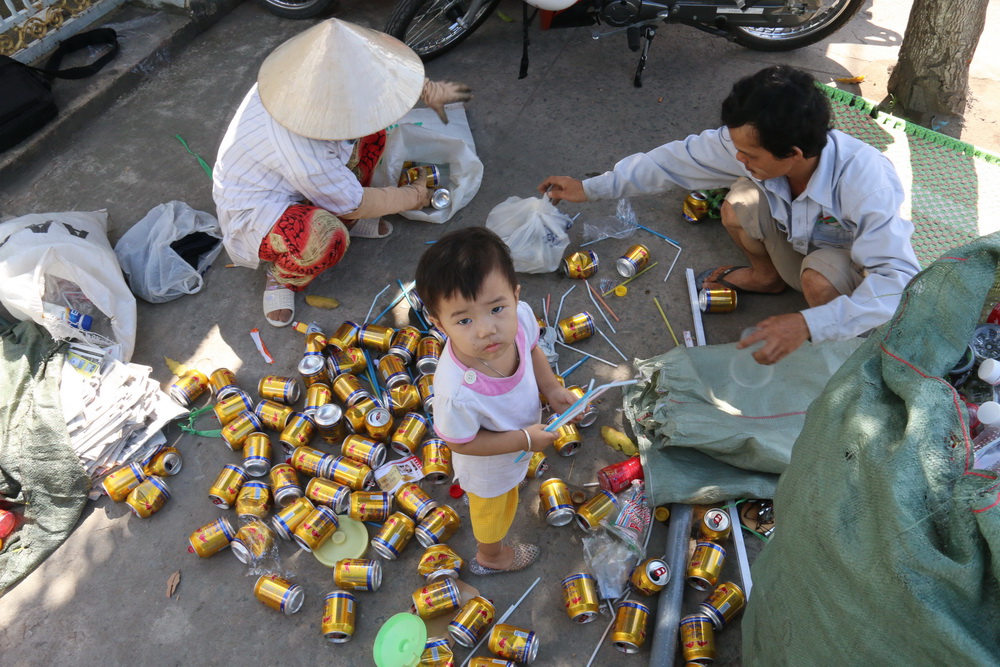 A large number of poor migrant workers in Ho Chi Minh City have got no plans to  return to their hometown for get-togethers during Tet (traditional Vietnamese Lunar New Year,) which is less than two months away.

The migrant workers, who come to HCMC from all over the country, work hard during the year to eke out a living.

Instead of returning home to reunite with their elderly parents and young kids, many have no choice but to spend a forlorn Tet in the southern city, working overtime and saving around one or two hundred US dollars in train or coach fares and gifts for their relatives back home.

Many even have not seen their family for six or seven years.   Le Thanh Tien and his wife, Vo Thi Xuan Tuyet, are among them.

They left their hometown in central Quang Ngai Province for HCMC six years ago and have not returned there since.

The couple earn their living and provide for their two young daughters by collecting and trading scraps. They resist the urge to return to their hometown and spend their sad Tet holiday nearly 1,000 kilometers away from home.

She hopes the painting, which she started creating around one year ago, will fetch some dozens of dollars so she would have an additional sum for Tet spending.

“I have not returned to my hometown for three years and half. It’s my fourth Tet here. My brother and I planned to come home this year, but cannot afford coach fares of at least VND1.2 to 2 million (up to $94) apiece and gifts for relatives and other expenses,” Thuy sadly shared.

She broke up with her husband when their son was only two months old.

When her son was 2.5 years old, the woman left her hometown in central Ha Tinh Province for HCMC, where she earns a meager living as a worker for a local footwear company.

“My 7-year-old son keeps asking me to come home. I could only give him empty promises and hold back my tears,” Thuy added.

Bui Thi Hoa, 34, and her husband, Le Van Huynh, also have no plans to return to their hometown in northern Thai Nguyen Province.

Huynh has been unemployed for nearly one month now.

33-year-old Vi Thi Tam, of Thai ethnic minority, and her husband left their home in northern Thanh Hoa Province to earn money to pay their debts in the southern city.

She has visited her family only once in the past six years.