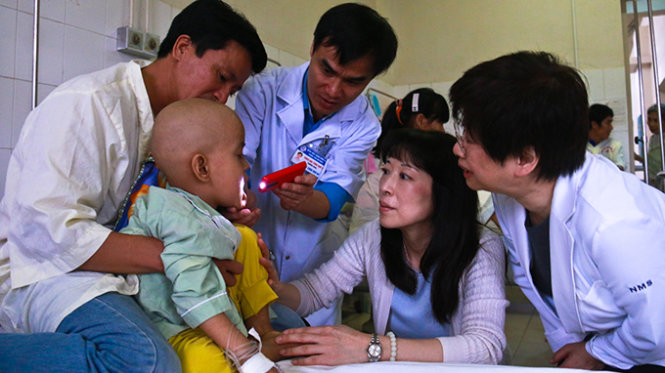 A middle-aged Japanese woman has dedicated a large part of her time over the past nine years to care for cancer child patients in Hue City and encourage them and their family to fight on for their life.

The Pediatrics Center of Hue Central Hospital in central Vietnam’s Thua Thien- Hue Province in the wintry months is warmed up thanks to the laughter of the cancer child patients who gather around Kazuyo Watanabe- a slender, golden-hearted Japanese woman.

Watanabe, 48, stays at the patients’ rooms from dawn to dusk, and sometimes doesn’t’ leave the hospital until past midnight.

Few know that she is chair of the Japan-based Asian Children’s Care League (ACCL), an NGO founded in 2005 and dedicated to saving lives of cancer child patients and improving the quality of their life.

From 2005, Watanabe leaves Tokyo for Hue once every three months and stays at a small rented house for around two weeks.

She is affectionately dubbed “mother Nhat” by the children, their family and staff at the hospital.

The kind-hearted woman was conferred with a medal of “For people’s health” by the Vietnamese Ministry of Health in mid December 2014.

Watanabe first travelled to Vietnam 20 years ago before finding herself teaching the Japanese language at Hue Pedagogical University and working for a project which aims to help unfortunate local kids.

Since she happened to learn of Hue Central Hospital’s high rate of child patients and their families giving up on cancer treatment, Watanabe has decided to put aside everything else and launch her own project on assisting the poor children.

The Japanese woman has brought over hi-end equipment from Japan to the Hue hospital.

“I wish to offer the kids here the best medical care from Japan, as several forms of the illness are curable as long as the child patients themselves and their families never give up hope,” she shared.

She added a large number of Japanese cancer child patients have been cured completely after a three-year treatment process and grown up to become doctors and engineers.

Watanabe’s project aims to minimize the rate of quitting treatment while maximizing their chance of survival and successful treatment among child cancer sufferers in the central region.

Le Minh Nhat, father of a child patient at Hue Central Hospital’s Pediatrics Center, said Watanabe is attentive to even the smallest things, including the children’s room furnishings and personal hygiene gadgets.

She’s always willing to allow the kids’ parents to share her rented house, as the center is packed with patients and has no room left for relatives or care takers.

“We were totally devastated when my child was first diagnosed with blood cancer, and were on the verge of quitting the treatment. Mother Nhat somehow learned of our intention and encouraged us to stick to the treatment process. She helped us solve part of our financial problems and took care of my child on a daily basis even better than my wife does,” Nhat recalled.

Deeply moved by the devotion of such a total stranger, Nhat and his wife are set on fighting to the end. Their child has received treatment at the center for more than two years now.

The Hue Central Hospital’s rate of quitting treatment among child cancer patients was 50% in 2005.

To local and international experts’ surprise,  the rate dropped to less than 5% in 2014.

But it does not come as a miracle to Watanabe, who considers it a hard-earned achievement.

Compared to their peers in Japan, Vietnamese child cancer patients usually are not given early diagnosis or proper treatment. Many even die before they are diagnosed with the illness, Watanabe said.

Their parents also tend to give up hope due to financial difficulties and assumption that cancer means death.

The woman has thus collected funds to cover the families’ fares, meals and treatment costs.

She has also dispatched experienced doctors to the province’s remote communes to early detect signs of cancer and brought them to Hue City for proper treatment.

The Japanese woman also holds outings and throws birthday parties and celebratory activities during Tet (traditional Lunar New Year), Mid-Autumn Festival right at the center to relieve the kids of their fatigue from relentless medical treatment and fill their void for childhood games.

Watanabe also launched parents’ association to connect the families and encourage them to share experience, and organizes regular exchanges between Japanese and local doctors.

“I always have a camera with me to capture the kids’ brightest moments and am eager to share the photos with them. However, many don’t have the chance to see their own photos. My heart really aches whenever a child patient passes away after their relentless fight,” Watanabe emotionally shared.

Though a single woman, she considers herself a daughter-in-law of Hue City and has hundreds of kids.

Each of her trips to Vietnam is just like a homecoming.

Her landings at Da Nang Airport also in the central region are always warmly received by the child patients’ families, who cover more than 100 kilometers from other provinces just to greet her.