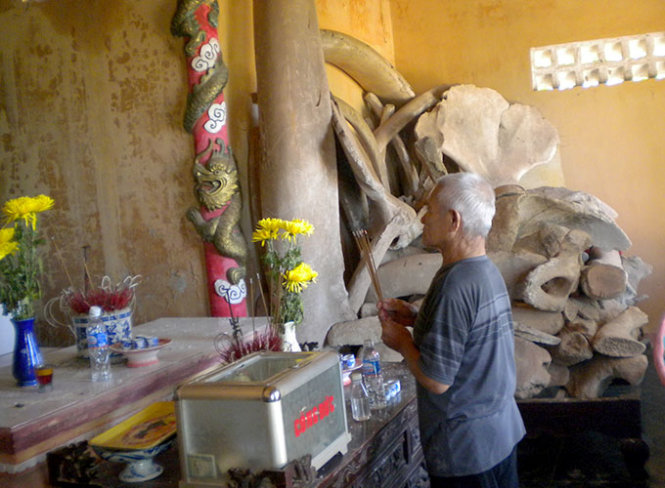 One will see the unique with their own eyes when visiting Quang Binh Province, which has a curved coast facing the East Vietnam Sea.

Thanks to the currents of the sea below China’s Hainan Island, the curved coast of the province in central Vietnam has been the destination of giant bodies of dead whales, which are considered the sacred creature of the sea and the savior of fishermen.

A cemetery for whales has existed for centuries in the coastal locality.

Pham Quoc Hong, 80, a veteran fisherman, said local fishermen call the whales ‘sir’ or ‘madam’ to pay their respect to the sacred animal.

They believe that whales often save fishermen by leading them ashore when their boats have technical problems in the open sea.

The most recent story happened in 2007 when a boat owned by a fisherman in Canh Duong Village of Quang Trach District had problems offshore and was drifting.

When big waves almost sank the boat, a whale came and lifted it up with its back until the problem was repaired.

It was a memorable moment in the life of a fisherman in danger, Hong said.

That is why when a dead whale floats ashore, fishermen hold a burial ceremony for the ‘lady’ or ‘gentleman’.

The most recent whale funeral was organized last May when a 150kg whale ran adrift on the coast of Canh Duong.

Residents of the coastal area of Quang Binh always express their regret for the death of a whale as if it were their savior, and a cemetery for the sacred animals was established centuries ago.

Now, it is the burial ground of 17 giant whales. Each has a tomb and is given incense, like that for a human being.

Hong said, “In our eyes, we see different kinds of people, but the whale is of only one strain – always the savior of human beings.

“Not only do we hold funerals for them, we also organize annual anniversaries for the death of each whale.”

All 17 tombs at the cemetery are enclosed by walls, like those for people, with only one unique difference – they do not have tombstones.

A temple was also built in the enclosure to worship the ‘knight’ whales. The temple contains two giant whale skeletons.

Nguyen Van Bieu, the keeper of the temple, estimated that each skeleton weighs dozens of metric tons. The skeletons are of a female whale which died in 1809 and a male that died in 1907.

The remains of the skeletons are not complete because the area was ravaged by war before 1975, according to Bieu.

The temple has regular incense ceremonies on the first and the fifteenth day of each lunar month to pray for peace and the safety of fishermen at sea.

The cemetery of the unknown

Not only whales but the bodies of dead people also drift to the coast of Quang Binh, and locals always gather them into a specific cemetery. It is called the cemetery for the unknown, located in Sa Dong Village in Bao Ninh Commune of Dong Hoi Town.

The tombs there also have no tombstone because the non-locals died at sea without leaving a name.

The cemetery was established in the 18th century, according to the cemetery keeper, Truong Phuong Xa, 70, also a retired fisherman.

It is the last resting place of not only Vietnamese people but also Chinese and people of other nations, he added.

“Though we do not know their names, homeland or relatives, we think we are offering help – a love between people and people,” he said.

Duong Van Khu is in his 80s and lives on Thanh Binh Coast, Quang Xuan Commune of Quang Trach District. He is a respected and well known member of the community thanks to his strong will.

He lost his ability to see when he was a small child after battling a disease.

Now, he can walk along the coast and alleys in his hometown as quickly as a normal man because the layout is in his mind.

Though blind, he started working as a fisherman offshore when he was in his 20s and became as skillful as all the others.

He also worked as deputy Party secretary in his locality from 1964 to 1973 thanks to his cleverness. He served as a laborer to build roads for army vehicles and a volunteer aboard military cargo boats during wartime.