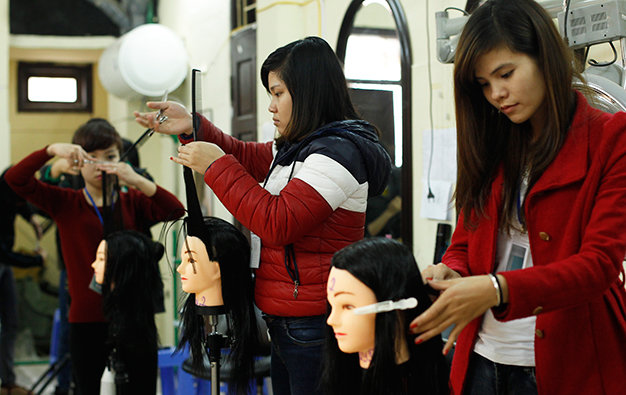 A local organization has provided free vocational training and job placement services for Vietnam’s disadvantaged youth for over a decade, while a woman is dedicated to showing job seekers how to impress recruiters.

REACH, a local non-government and non-profit organization, has helped thousands of disadvantaged youth reach for their future.

Founded in 2004 under the management of the Vietnam Union of Science and Technology Associations (VUSTA), the agency specializes in providing vocational training, career consultancy and job placement services for Vietnam’s underprivileged youth, according to its website.

It targets disadvantaged people aged 16 to 30 living in the cities and neighbouring provinces of Hanoi, Hue and Danang, and include in our target group young women from marginalised groups such as trafficked women, and women from families living with/ affected by HIV or other difficult circumstances.

REACH has trained over 6,600 students between 2004 and 2011, with over 80% of its students having quite a good job around six months after graduation, and many even advancing to supervisor, assistant manager and manager roles not long after completing their courses, its website added.

The agency, based in Hanoi’s Tu Liem District, offers three batches of free training courses in March, July and October every year, with each course running in a few months.

Nguyen Thi Thuan, a former REACH student, shared she learned of the agency through friends, who are also its former students, two years ago, and decided to give it a try.

The young woman has landed a stable job at a hair salon in Hanoi after completing her training course at REACH in 2012.

Vu Thi Mai, a girl born with no hands, could not afford a decent education in her hometown, Gia Lai Province in the Central Highlands.

She learned to write with her feet at home instead.

Mai shared her life would be confined to her home if she did not learn of REACH on her friends’ Facebook.

The girl then received training in simple graphic designing at the agency and was introduced her current job in Hanoi.

REACH has modified its training courses in accordance with current job demands, with most courses offered in hairdressing, makeup and simple graphic design.

Many of its students are former inmates at compulsory rehabilitation centers or are those who wish to turn over a new leaf after their past mistakes.

As social integration is one of these students’ major hurdles, REACH staff serve as both instructors and confidants.

D.T.T.H, a former REACH student in manicure, excitedly shared with her classmates about her new nail shop in Hanoi.

H. previously worked as a prostitute and spent time in a compulsory rehabilitation center.

Some former REACH students even recruit their successors as staffers at their own shops.

At around 6pm every day, Viec Lam (Job) Café, located in an alley in Dong Nai Province’s Bien Hoa City, some 30 kilometers from Ho Chi Minh City, is packed with clients who come not for drinks, but mostly for the owner’s free consultancy in job placement and application.

Available at the shop are also bulletin boards which offer detailed information of job vacancies.

Its clientele come in a wide age bracket and also from neighboring cities and provinces.

It also runs an English speaking club, which operates some evenings each week.

The café’s owner is Mai Kim Khanh, 35, who has worked in human resources at a local company for over 10 years now. At nearly 6pm every day, she shuttles between work and the café, which is some 30 kilometers away, and stays there until 9 or 10pm.

Graduating from a university in HCMC over one year ago, Quan returns to his hometown of Bien Hoa and has applied at several local companies, to little avail.

Learning of his undue attention to his resume and job applications, Khanh showed him to write an attention- grabbing one.

She offered the young man loads of tips, drawn from her own experience as a job applicant years ago and a personnel staffer now, including submitting a bright-looking photo, and highlighting his strengths and working experience.

“Fresh university graduates often don’t include their working experience, as they think they have none. In reality, being class or club leaders and volunteers or part-time jobs offer them plenty of experience in management and public relations. The thing that counts is knowing how to accentuate them to the recruiter,” Khanh noted.

After the consultancy session, Anh realized she has ample experience.

Khanh shared she developed her calling on helping youths find jobs some 10 years ago, as she can relate their job seeking challenges now to her own years ago.

Before opening the cafe, she contacted several young job seekers and offered them consultancy.

However, many thought she was trying to sell them some kind of products.

Khanh then began conceiving a plan to open her café, which is expected to turn into a rendezvous for job seekers.

Soon after being launched, her cafe, which offers drinks at affordable prices, has received a large number of clients, mostly youth.

She provides consultancy to some seven or eight persons each night on average, and has helped some 50 people land suitable jobs after three months.

Khanh shared she is trying to turn the café into a chain in hopes of assisting many more job seekers.