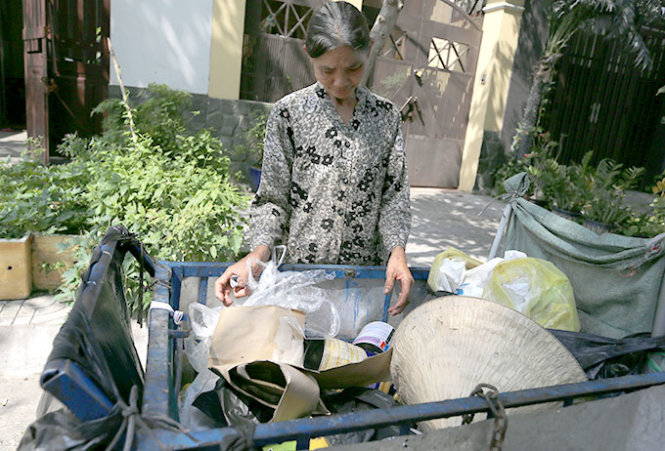 To save more money for their young children in their homelands, many parents, who left other provinces, mostly in the north, to work in Ho Chi Minh City choose to have a lonely Lunar New Year (Tet) away from home even though they have not gone home for many years.

Though it costs around VND2 million (US$96) for a two-way coach ticket between Ho Chi Minh City and Hanoi, they accept missing their children and relatives during the Tet season, which arrives in a week.

Many of them have not gone home to visit their families for seven years.

Not only do they save the transport fee, they can also find extra jobs during the Tet holiday to make more money.

Holding a photo of her five-year old son, Nguyen Thi Thao tried to hold back her tears. After leaving her hometown in coastal Quang Xuong District of Thanh Hoa Province in the north-central region ten years ago, she has not gone home for two years.

Her tears dropped on the photo of her son and the gift she has prepared to ask her friends to forward to him.

Thao is a worker at Tan Tao Industrial Park.

“My husband and I left Thanh Hoa and have worked here for many years.

“I miss my son so much and wish to hold him in my arms and feed him some milk and cakes.

“But we have to accept to be far from him to have money to invest for his future.

“If I stay at home with him, I’ll have no money to take care of him,” Thao said.

Thao and her husband earn a total monthly income of VND6-7 million ($288-337). Half of the sum is for daily necessities in this costly city and the other half is saved to send home for her family of seven, including parents.

Vu Thi Dinh from Thanh Hoa is another parent living far from home.

This upcoming Tet is the third year in a row she and her husband have stayed far from their home and children to work at the Linh Trung Processing Zone in Thu Duc District, Ho Chi Minh City.

Their two children live with their grandparents at home.

Her older son, a ninth grader, called to urge her go back home and stop working so far away.

Staying in Ho Chi Minh City during the Tet holiday gives them the chance to do extra work and sell vegetables and fruit when most markets close during the festival, which lasts around one week.

However, the most miserable case must be a woman named Truong Thi Song, 65, from Thang Binh District in the central province of Quang Nam.

Ten years ago she took her son to Ho Chi Minh City for cancer treatment and earned her living by picking rubbish.

Although her son died of cancer, she discovered that she can earn more money by working in the southern city and has remained here ever since.

Song is planning to go home after Tet when the price for bus tickets goes down.

To support workers living far from home this coming Tet, the Vietnam Confederation of Labor of Ho Chi Minh City has called on enterprises to donate a total of 28,000 coach tickets for poor people to go home.