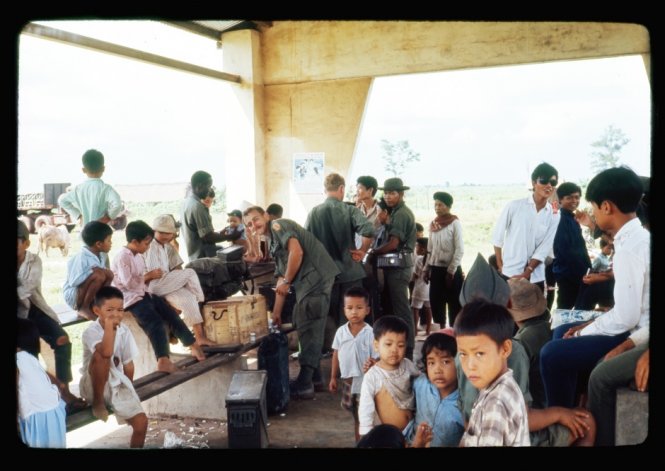 An American photographer has showcased photos which he took of Vietnamese war children’s current life in a British newspaper.

Photographer Reed Young had the photos run by The Guardian on Friday last week.

In October 1969, at the height of the war in Vietnam, U.S. medic/hobby photographer Bob Shirley took snapshots of a group of local children in Chon Thanh Village in Chon Thanh District in the southern province of Binh Duong.

He captured local life using a cheap 35mm camera he had picked up, according to the article on The Guardian.

Nearly 50 years later, photographer Reed Young caught up with the people in the pictures.

He and his friend, Larry Johns, were keen to find out what happened to the kids and if they were still alive.

Johns’ elder brother, who served in the U.S. army, was accidentally killed in a blast near Chon Thanh Village.

The process of tracking down the children took a couple of years and the help of one man, The, one of the photographed children, who has a photographic memory.

After coming across one of Johns’ flyers at a wedding, The helped him locate 16 of the children Shirley had photographed that year.

The 16 children, now in their 50s, left Chon Thanh Village a long time ago and have settled in other areas.

They were all deeply moved upon seeing the photos taken by Shirley all those years ago. Some did not even know they had been photographed.

In one of the pictures, which is Shirley’s favorite, a 10-year-old girl named Sa peers into the lens cautiously.

Sa’s brother, Loc, stands beside her, impatiently awaiting treatment for his injured foot.

Forty-six years later, Sa bursts into tears at the sight of her photo.

She and her husband now own a “thanh long” (dragon fruit) farm near Phan Thiet City in the south-central province of Binh Thuan.

“Life is still difficult, but I feel touched that the soldiers remember us,” The Guardian cited her as saying.

Following are some of Bob Shirley’s photos which were taken in 1969, six years before the war ended, alongside those recently taken by Reed Young.

Diem (left), 9, who was tasked with bringing cooked rice to staff at a coke store near an American military base, is seen in Shirley's 1969 photo shoot.

Today's Diem is seen in this picture taken by Young at his home in the southern province of Ba Ria-Vung Tau, where his family runs a hair salon.

Shirley's 1969 photo captures Tuan (right), who would fetch food and medicine from American soldiers. His mother got wounded during the war.

Today's Tuan (right), a cancer survivor, is shown at his home in this photo by Young. He told Young that he had no idea Shirley took pictures of him and his peers and he is deeply moved seeing the photos.

Sa, 10, and her brother, Loc, who were temporarily taken care of by American soldiers, are seen in one of Shirley’s 1969 photos. The kids’ mother was bitten by a snake and taken on board a helicopter to an American military hospital for medical care. After a 3-month wait, Sa’s mother returned safe and sound to her, her father, and seven siblings.

Today's Sa and her husband own a “thanh long” (dragon fruit) farm near Phan Thiet City in the south-central province of Binh Thuan. She is pictured lying amidst her dragon fruit fields in this photo taken by Young.

Today's The, who is now a farmer and lives with his wife and three children, is portrayed in Young's photo. After coming across a flyer searching for the kids back then, The, who has a photographic memory, helped Young and his friend, Johns, locate 16 of the children Shirley had photographed in 1969.

Truong, Thanh, Cuong (third, fourth, and fifth from left) are seen in one of Shirley's 1969 photos.

Today's Truong is seen in one of Young's photos. He is living in Phan Thiet City in the south-central province of Binh Thuan with his wife and their six children.

Today's Thanh (left) and Cuong, as seen in Young's photo, are both happily married with children and live in Vung Tau City, some 100 kilometers from Ho Chi Minh City.