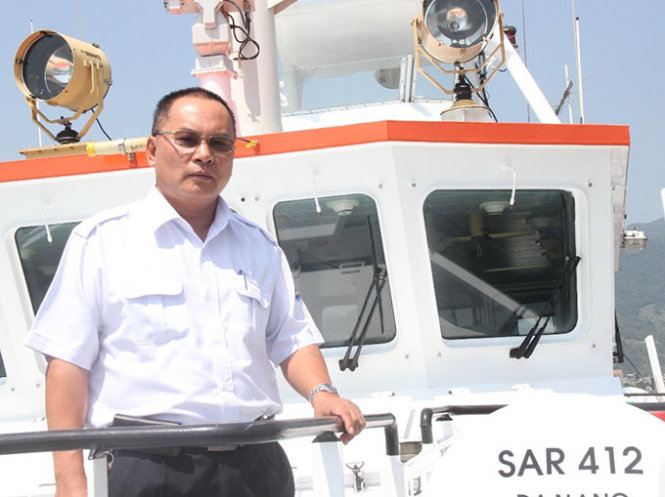 The ‘guardian angel’ of Vietnam’s seas

A middle-aged captain has devoted a major chunk of his life to the rescue of Vietnamese fishermen and cemented their sense of security against the perils of working in the open sea.

Each of their rescue trips is a race against time to come to the rescue of those in distress, a struggle against rough seas and stormy weather, and also an ordeal with other looming menaces.

Its captain over the past 10 years has been Phan Xuan Son, 57.

On February 10, 2015, Captain Son and 21 crew members aboard the SAR 412 made a breathtaking rescue of a group of fishermen from the central province of Binh Dinh whose boat sank off Vietnam’s Hoang Sa (Paracel) archipelago administered by the central Vietnamese city of Da Nang.

Captain Son recalled that as soon as he received a rescue order at 3:30 pm on February 10, the SAR 412 headed straight to the sea off Hoang Sa where two fishing boats had sunk.

The rescue ship reached the distressed fishermen in the early morning of the following day, and they soon spotted five fishermen adrift in a basket boat.

Lettering on the basket boat revealed that it had been gifted to the fishermen by Tuoi Tre (Youth) newspaper readers.

The other of the two boats was grounded on Hoang Sa’s Yen Island, around 100 kilometers from the first, with six fishermen waiting in desperation to be rescued.

“The submerged island where the boat grounded is particularly precarious as it is riddled with coral reefs. Our crew members maneuvered the ship with great caution,” the captain said.   To add to the tension, Son spotted a Chinese marine police vessel which was approaching them from another island.

A short while later, a Chinese navy vessel appeared some 100 meters from the SAR 412, with its water cannon drawn.

A Chinese helicopter also hovered menacingly above the SAR 412.

Son kept reassuring his crew members and ordered them to proceed with approaching the fishermen.

The Chinese marine police vessel continued to tail the SAR 412, some two nautical miles away, after all the distressed fishermen got on board.

“Apart from this, there were three other times when we were also menaced by Chinese vessels off Hoang Sa, but we kept our composure and focused on our job,” Son further recalled.

As soon as the crew took the fishermen to safety on the mainland, they were lauded by Minister of Transport Dinh La Thang for their perseverance, dedication to their job and efforts to reiterate the country’s irrefutable sovereignty over the Hoang Sa archipelago.

After graduating from a maritime university in the northern city of Hai Phong, Son worked as a crew member on seafaring ships.

Son added his crew members are on guard 24 hours a day, seven days a week and are willing to brave the most unforgiving weather to do their job.

For that reason, he and his crew usually do not travel out of Da Nang.

“Time is of the essence, as prompt actions mean the difference between life and death. I’m still haunted by the tremendous human losses when my team and I failed to help,” he revealed.

One such trip is the one they made in the aftermath of Chanchu Storm in 2006.

A ghastly, tragic scene unfolded upon their arrival, as several fishermen’s bodies were adrift in the waters.

“Within two days, we received eight bodies and rescued 10 others. Our hearts ached as the casualties were huge,” Son said.

The SAR 412 also provides timely assistance for local fishermen and natives who get isolated while seeking shelter from storms on islands.

During a time which saw rough seas in November 2010, locals on Ly Son Island off the central province of Quang Ngai were isolated from the mainland for over 10 days.

After a half-day trip, the SAR 412 docked on the island with one ton of rice, the first relief shipment which was donated by the ship’s crew and staff.

At the sight of the ship, over 100 locals poured out to welcome its crew.

According to Bui Tan Nguyen, director of the Da Nang MRCC, the SAR 412 is his unit’s largest ship.

The ship’s mechanics ingeniously enlarged its fuel tank, which has considerably boosted its operation time and range at sea from 250 to almost 600 nautical miles and enhanced victims’ chances of survival, he added.

Huynh Van Thang, deputy head of Da Nang City’s Steering Board for Storm Prevention, Search and Rescue, said he and locals are highly appreciative of the Da Nang MRCC’s tireless rescue efforts, which save and come to the aid of over 100 local fishermen each year.