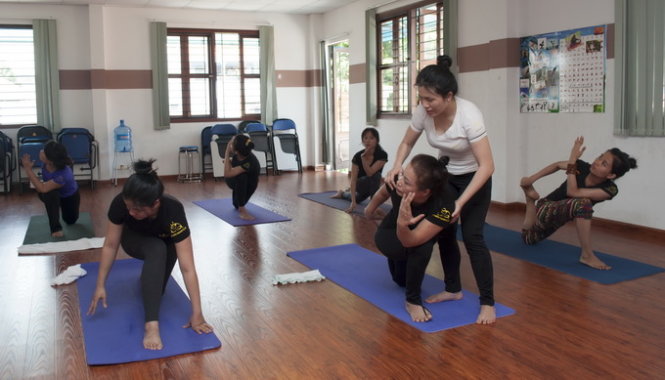 An enterprising Vietnamese woman has tasted the first fruit of her ambitious quest to ‘ship’ local yoga coaches to other countries, including those where the discipline has gained a strong foothold.

A female Vietnamese yoga coach on Tuesday left for Thailand, where she will work as such.

The country is currently home to many yoga centers.

According to 28-year-old Le Thi To Hai, board chair of Ho Chi Minh City-based Golden Hearts Co., the above-mentioned woman is the first of the company’s batch of over 100 coaches who are poised to work in Japan, Australia, UAE, among other countries.

In October last year, the company also provided coaches for yoga clubs which operate under the Vietnamese branch of Renaissance, a major Japanese fitness and health care company with 120 subsidiaries across Japan.

These trainers met the Japanese company’s exacting requirements, including graduation in advanced anatomy and an international-recognized certificate awarded by the Mumbai-based Yoga Institute.

Established in 1918, the institute is the oldest yoga center in India and in the world.

The Vietnamese trainers were also required to have at least three years of working experience in the discipline, adequate communicative English, and needed professional skills and qualities.

How a 'yoga entrepreneur' was made

At 15, Hai, the Golden Hearts Co. board chair, took up yoga in the hope of shedding weight and fixing her crooked arms, which failed to rest straight along her hips.

Practicing yoga was simply another effort made by the teenager to have a slim figure and straight arms after her attempts with aerobics and jogging failed.

Noticing marked changes to her body after some time practicing yoga, Hai became hooked on the sport, which remained in its infancy in the country back then.

The spurt of passion urged her to delve further into the practice.

Hai then tried to contact Ayuni, a noted Japanese coach who was teaching at Sofitel Saigon Plaza, located in District 1, but the Japanese woman declined to take Hai as her student without citing any reason.

Undaunted, the girl persistently came to see the coach at her home for one week, and her efforts finally paid off.

Only one month after being admitted, Hai acquired much of what Ayuni had to pass on to her.

Hai then went on to take more courses run by a foreign yoga coach for US$100 per month, with no limit to class hours. She made sure she sat all the four classes given each day.

She also learned with Joe, an American coach, for $60 per hour to hone her yoga skills and improve her English command.

At 16, on a limited budget, Hai traveled to Thailand, which was home to many yoga centers, most of which offered a free one-week trial then.

The girl visited India – a yoga mecca – later. Following the trip to India, the tuition that she charged her students rose to $24 per hour.

At 21, Hai gambled VND100 million ($4,629) on establishing her own company, which offers yoga training courses. She had closed down two cafés and a cosmetics stall at a local market, and given up tutoring at students' homes, which provided her with a good income at that time.

Her profuse training experience in several countries cemented her vision that the great potential of sending Vietnamese yoga trainers to other countries remains untapped.

After relentless efforts, Hai managed to get internationally-recognized certificates issued to her students.

The woman is the current director in Vietnam of Yoga Alliance International – India’s first international alliance in the sport – and also the global ambassador of The Yoga Institute with nearly 100 years of prestige in India.

Hai told Tuoi Tre (Youth) newspaper that though basically anyone can train to become yoga instructors, Vietnamese people are particularly cut out for the profession.

Like those in other Asian countries, Vietnamese yoga practitioners are typically endowed with suppleness and small skeletons, and are naturally zealous, attentive and hospitable, which is key to a fruitful yoga coaching job, she explained. Hai added optimistically that she is currently in negotiation with some other countries, with 50 to 100 trainers expected to be ‘shipped’ to each country every year.