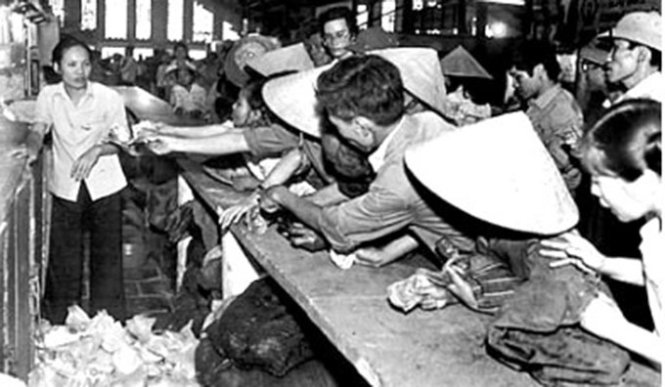 After national reunification in 1975, Vietnam faced a serious period of malnutrition due to problems in state management and had to borrow wheat from India, rice from Indonesia along with aid from the former USSR.

The movement of setting up farming cooperatives, a kind of collective ownership that started in Vietnam soon after the reunification, was considered one of the reasons leading to malnutrition the following years.

Deputy Prime Minister Pham Hung confirmed it after making a field trip to southern Vietnam in 1979.

He said in Ho Chi Minh City, “Authorities in many provinces developed collective ownership with commands and constraints.

“They handcuffed, tied, beat, and forced people to gather in classes to propagandize them into cooperatives.”

It was the constraints and commands for building cooperatives that led to a considerable reduction in farming production during that time.

With a desperate shortage of rice, Vietnamese people had meals with the grain mixed with white potato, sweet potato, and ‘bo bo,’ which is a kind of black cereal provided by the former USSR, commonly called rye or Job’s tears or sorghum in English.

‘Bo bo’ not in the meals of the providing countries

In his memoirs, former Deputy Prime Minister Tran Phuong wrote, “The ‘heaviest’ mission of the government then was to manage to have rice for people.

“Then, each Vietnamese needed at least 300kg of rice for both food and seeds a year.

“But Vietnam produced fewer than that, so it had to ask for sponsorship and loans from friend nations.”

The former USSR and India gave Vietnam ‘bo bo’ as secondary cereals during the time.

But in these countries, the main starch in the meals of ordinary people came mainly from potato and wheat, not ‘bo bo’ since it takes much time to process the kind of cereal before eating, according to Professor Nguyen Van Luat, former head of the Mekong Delta Rice Institute.

‘Bo bo’ grains have a very hard layer and so they are not used for direct cooking, as what Vietnamese did during the period of malnutrition, but they must be husked and fermented to extract the starch.

Vietnam did not have sufficient equipment to process the grain that way during the time.

‘Bo bo’ was planted on a trial basis in Can Tho City and An Giang Province in the Mekong Delta and some localities in the north before 1975 but the trial was then scrapped because of the grain’s unsuitable taste and ubiquitous crop insects.

He said he was assigned to fly to India and Indonesia for negotiations to take ‘loans of rice.’

“Vietnam now suffers a shortage of food while you have bumper crops, do not have sufficient warehouses to keep your grains, and thus let them gradually drop in the field. Please let us keep them for you and we guarantee to return all of them later,” Tan recounted what he said to his counterparts in India and Indonesia when asking them to give Vietnam ‘food loans.’

He got positive feedback from friendly India since the nation agreed to lend Vietnam 300,000 metric tons of wheat.

But Vietnam could not have equipment to husk the cereal and Tan had to ask India to do the husking work and Vietnam would pay for the cost, which was 30 percent of the end-products.

Tan also flew to Indonesia for the same purpose and the nation also consented to supply Vietnam with a loan of 200,000 metric tons of rice.

Indonesia also invited Vo Van Kiet, a late Vietnamese prime minister, to visit the nation after that, according to Tan.

In addition, Vietnam’s then-Ministry of Food had assistance from the Ipitrade Company of Frenchman Doumeng, who was a millionaire of the French Communist Party and friendly with Vietnam.

Doumeng spent his money buying 500,000 metric tons of rice from Thailand and sold it on credit to Vietnam.

The Frenchman helped the Vietnamese Ministry of Food many times after that.

During the malnutrition period, many northern localities, including Hai Phong City, sent their delegates to southern Vietnam to buy rice to ease the shortage of food there.