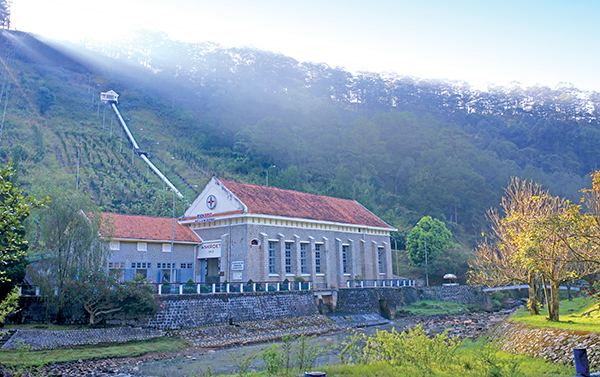 A hydroelectric plant near Da Lat resort town in Vietnam's Central Highlands region, which was the first of its kind in Indochina, remains a source of pride and nostalgia for insiders.

The plant is located at Ankroet Waterfall amidst the picturesque landscape of Suoi Vang Valley.

Archival materials on the Ankroet Hydroelectric Plant are limited.

According to a book titled “Dia Chi Da Lat” (Monographs on Da Lat), construction work on the facility began in October 1942.

The plant came into operation in 1946.

Its initial designed capacity was a mere 600 kilowatts, which is considerably smaller than that of its medium-size successors.

To start with, the plant consisted of two 300-kilowatt U.S.-made machine complexes, which boasted visible, horizontal turbine shafts, unlike its counterparts nowadays which feature underground turbines and vertical shafts.

What made Ankroët unique is that the structure and the two dykes were built from rocks mined in Suoi Vang Valley.

“The facility is the hard-earned fruit acquired by several thousand Vietnamese construction workers. Around 1,000 lost their lives during the process,” Nguyen The Son, a technical overseer at Ankroët Hydroelectric Plant, revealed.

He pointed to a mound nearby which is considered a mass grave of anonymous workers who perished in rock mining and transportation accidents.

Tran Minh Ngoc, a technical staffer, showed a Tuoi Tre (Youth) newspaper reporter around the facility in search of vestiges of the bygone days.

A number of tools used by these workers are preserved as a tribute to their contributions.

In 1942, the French sent thousands of workers from northern and central regions to Suoi Vang, where they felled trees, mined for rocks, and built two dams and the plant itself.

The workers split some 1,000 cubic meters of rock into identical, square slabs with simple tools, which was an astounding amount of work to finish in just two years, Son added.

With the plant sitting at the valley’s deepest point and no trails to the densely forested valley available, it was a daunting task to transfer bulky machinery and equipment from Saigon (Ho Chi Minh City now) to the Ankroët plant’s construction site.

They joined hands to carry cumbersome machinery which could not be taken apart, making painfully slow progress on the treacherous terrain.

Many fatal accidents occurred during this process, Son revealed.

The workers, aged between 17 and 30, toiled tremendously hard and endured appalling conditions, including the biting cold and hostile weather.

No one dared to attempt an escape under the stringent watch of wardens and foremen.

In 1962, to generate electricity for construction work on the Da Nhim Hydroelectric Plant, located in the province’s Don Duong District, a new machine complex was added to the Ankroët plant, raising its capacity to 3,100 kilowatts.

In 1964, the Da Nhim plant became operational, attaining a capacity of 160 megawatts, which is some 50 times larger than the volume generated by Ankroët, and supplied power for half of the southern region’s population back then.

In 2004, after almost 60 years of nonstop operation, two timeworn machine complexes were replaced with new Chinese-made ones boasting a larger capacity.

One of the two timeworn machine complexes which are being restored to be displayed at the Ankroet Hydroelectric Plant. Photo: Tuoi Tre

Son, the technical overseer at Ankroët, divulged that many of the staffers stood and looked on sadly from afar as they could not stand parting with their beloved machines when they were removed.

The two machine complexes were transported to the repair workshop of the Lam Dong Electricity Co., where they stayed for 10 years.

In 2014, one was restored and is now displayed at Vietnam Electricity, a state-owned power company.

According to Thai Dac Toan, director of the provincial Electricity Co., an overhaul is taking place on the other machine complex, which will be put on show at the Ankroët Hydroelectric Plant.

Ankroët’s current capacity is 4,400 kilowatts, which is eight times larger than the initial capacity.

Its pipes, dams, and much of everything else remain just the same as 69 years ago.

Inside the Ankroët plant with its new, shiny machinery. Photo: Tuoi Tre

Its first generation of staffers have passed away, while only a handful of the next are still living, but are no longer mentally acute.

Most of the current staffers, who belong to the third generation, were inspired to work here by their fathers or older brothers, who dedicated a large chunk of their lives to the plant.

He built his own home next to the plant’s dam to facilitate his work there.

Son also took his first steps on the plant’s premises.

Nguyen Van Thuan, another overseer, followed his father’s footsteps to work at Ankroët in 1985.

Once, the plant’s directorate stationed Thuan at another facility in a different location.

Soon he insisted the directorate send him back to Ankroët, which he considers his second home.

Suoi Vang Valley in the Central Highlands province of Lam Dong, where the Ankroët Hydroelectric Plant is secluded, is seen in this Tuoi Tre file photo.