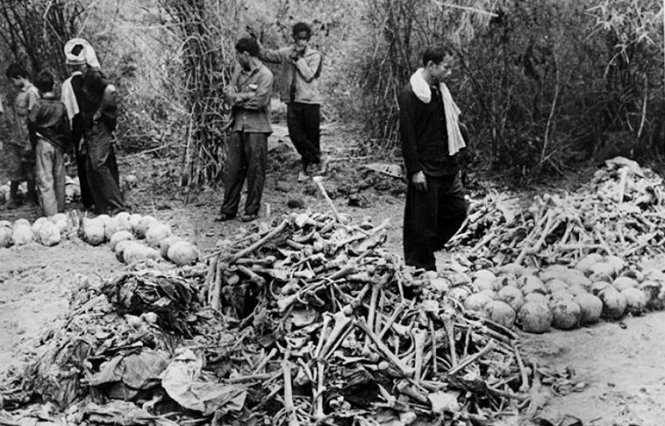 When mutual efforts to normalize relations between Vietnam and the U.S. were progressing toward a bright future, Cambodia’s ex-ruling regime, the China-backed Khmer Rouge, massacred Vietnamese people along the border and on islands.

Khmer Rouge soldiers had encroached on Vietnam and provoked responses along the border with military attacks since late 1975.

Three years later, Vietnam decided to counterattack the Khmer Rouge to defend its people, a move which ruined effort to normalize diplomatic ties with the U.S.

Was the Khmer Rouge, China, or the military counterattack of Vietnam to be blamed for the stalemate in Vietnam-U.S. ties?

It was geopolitical issues and the role of Beijing that contributed to the delay of Hanoi-Washington normalization for two decades.

However, Vietnam and the U.S. have overcome these obstacles to reach their current relationship after 40 years of effort.

Following the visit of a U.S. delegation to Hanoi in 1977, Vietnam sent a delegation to negotiate normalization with Washington in Paris, France the same year.

The U.S. suggested concrete steps toward normalization and promised to lift the ban on Vietnamese exports.

Vietnam was also admitted to the UN in 1977 during the term of Democratic President Jimmy Carter.

Vietnamese diplomat Tran Quang Co wrote, “The U.S. ambassador to the UN, Andrew Young, clearly stated that the U.S. considers Vietnam an independent nation, as well as the Yugoslavia of Asia. The U.S. does not consider Vietnam a part of China or the USSR. An independent and strong Vietnam matches the national benefits of the U.S.”

While negotiations were taking place rather smoothly, the Republican wing of the U.S. Congress successfully lobbied for the passage of an act that banned the U.S. government from discussing war reparations or aid with Vietnam.

The act was passed in mid-1977 and annulled the pledge of former President Richard Nixon to provide Hanoi with US$3.25 billion in aid after the war.

During a later round of negotiations in 1978 in Tokyo, Japan, Vietnam agreed to put aside its claims for war reparations from the U.S. to avoid the act and pave the way for a handshake between the two foes.

In late 1978, Vietnamese Deputy Foreign Minister Nguyen Co Thach flew to New York for the final negotiations with Richard Holbrooke, assistant to the secretary of state of the U.S., and the prospects for normalization became brighter.

But the turning point came the same year, when the Khmer Rouge escalated military attacks on Vietnamese border areas that had been ongoing since 1975.

Vietnam decided to take action. The counterattack marred efforts toward normalization with the U.S.

“A nation like Vietnam that has come out of several long wars will never want a new military battle like this,” he added.

The Khmer Rouge had killed over 500 Vietnamese people on Tho Chu Island, and hundreds of Vietnamese along the border.

Although the Vietnamese counterattack in late 1978 crushed the Khmer Rouge, Vietnam was criticized around the world for sending troops into Cambodia.

In addition, in late 1978, General Secretary of the Communist Party of Vietnam Le Duan and his Soviet counterpart, Leonid Brezhnev, signed a treaty of peace and cooperation, allowing each nation to help the other when one was attacked or threatened with an attack.

These events paused the progress in Vietnam’s normalization with the U.S.

Ex-President Carter later admitted that the U.S. favored good relations with China over ones with Vietnam back then.

In early 1979, Chinese leader Deng Xiaoping visited the U.S. After consulting President Carter, he announced he would ‘teach Vietnam a lesson’ for defeating the China-backed Khmer Rouge regime in Cambodia.

The military conflict between Vietnam and China along the northern border followed soon after that.

This series of events delayed the normalization of relations between Vietnam and the U.S. until 1995.