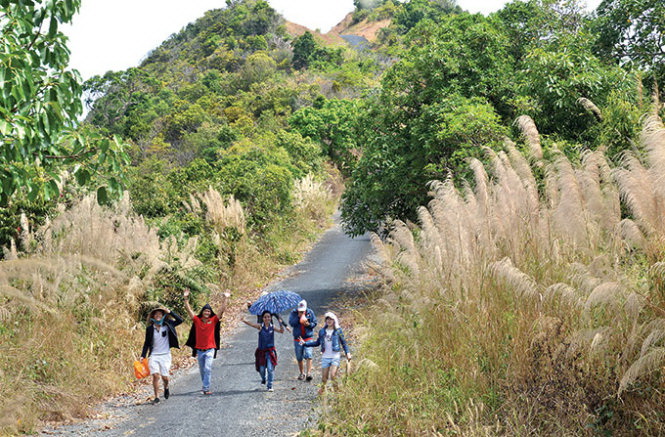 An archipelago and some islands in a Mekong Delta province have been brimming with holidaymakers, but tourism authorities are still struggling to cater to the burgeoning travel demand of visitors and local residents.

Kien Giang Province is endowed with the most tourism potential throughout the delta thanks to its stunning archipelagoes and islands in the West Sea.

However, except for the much-loved Phu Quoc Island, where infrastructure for tourism purposes have received due attention, the potentialities of the other islands and archipelagoes have gone largely ignored by provincial tourism authorities.

Over the past few years, increasing media coverage and attention on social networks, particularly Facebook, and travel forums have better promoted the province’s pristine beaches and dazzling coral reefs in such archipelagos as Hai Tac (Pirate), Ba Lua and Nam Du.

Weekenders and holidaymakers have since begun to flock to the beaches and islands to relish the advertised charms for themselves.

Such a “rush” has particularly been felt in Nam Du Archipelago and on Hon Tre and Lai Son Islands, located off Kien Hai District, since February.

Tourists and trekkers come in families and small groups.

Travel firms from other localities have also launched their own tours to send their clients to Nam Du, which is almost 90 kilometers from Rach Gia City, the province’s capital.

Only one boat ride is offered on a daily basis to carry some 165 tourists from the mainland to Nam Du and back.

On its way from Rach Gia to Nam Du, the boat also passes by Hon Tre and Hon Son Islands to cater to residents’ demand for getting around the island districts.

With the overwhelming influx of tourists, most have to book in advance for a seat on board the boat.

Many groups of holidaymakers from Ho Chi Minh City who do not make bookings cannot ride on the boat and have to wait for one or two days in Rach Gia City.

Many of them have switched to other places of interest.

Locals and officials who need to travel between the mainland and islands suffer the most as they usually cannot buy tickets, which have been fully booked by tourists.

For instance, if those in Nam Du Archipelago who want to travel to the heart of Kien Hai District are lucky enough to obtain tickets, they have to ride straight to Rach Gia City in the afternoon, spend one night there and get on a smaller boat to Hon Tre Island the following morning.

“Previously it cost a mere VND160,000 [US$7.2] to travel from Nam Du to Hon Tre. Now it costs double that amount due to the lengthened distance, excluding meals and accommodations,” Nguyen Thien Hai, chair of the Nam Du Commune Red Cross Society, said.

“Worse, we cannot always obtain tickets for passenger boat rides. Sometimes we resort to riding in freighters as our urgent business requires, though we’re well aware of the safety hazards involved and looming accident risks,” he added.

Ngo Thanh Phong, a resident of Nam Du Commune, revealed they have to implore owners of freighters to allow them to board their vessels, as the owners are afraid they will be fined by border guards and port authority officers for illegally transporting passengers.

The situation has only been partly relieved since early June, when Superdong Co. launched a 165-passenger ship for the Rach Gia-Nam Du route.

Nguyen Tat Linh, deputy chair of the An Son Commune People’s Committee, admitted that the provincial and grassroots tourism authorities have yet to propose plans or projects to administer or tap into the province’s tourism activities or potential.

Most places offering accommodation and dining services have mushroomed spontaneously.

Tourist arrivals to Nam Du Archipelago reached almost 2,000 in the first quarter of this year, and the count has soared to nearly 5,000, which outnumbers the commune’s population, in the second quarter, Linh added.

According to Tuoi Tre (Youth) newspaper observation, the presence of approximately 100 travelers a day has made the normally serene Nam Du Island teem with life. Islanders have also made considerable profits from offering tourism services.

Cu Tron Island, off An Son Commune, alone is home to over 80 rooms for rent.

Other services including “xe om” (motorbike taxi), motorbike rental, boat rides around the island and fishing have also thrived.

However, a lack of preparedness to welcome such an influx of holidaymakers has brought about worrying social and environmental consequences to Nam Du Archipelago and the islanders.

The tourist “incursion” has led to rising demand for seafood, and skyrocketing prices in times of scarcity.

The lack of a rubbish processing system is another grievance. Most islanders are not conscious about the importance of not dumping rubbish in certain areas.

Tourists just follow suit, littering all over the island.

Many tourists who engage in sea-diving activities even pick up gorgeous stones or coral twigs and bring them home as souvenirs.

On his Facebook page, Phong Vu, a tour operator in Nam Du Commune, urged tourists not to bring home such mementoes and not to devastate the islands’ ecological values in the process.

The highest point in Nam Du Archipelago is the peak of Cu Tron Island, which towers at 309 meters.

The peak is home to the Nam Du lighthouse and a navy radar station.

Stunning photos of the archipelago taken from the lighthouse which are posted on social networks have driven many travelers to set foot on the pinnacle.

Initially, officers and soldiers stationed there were receptive to such tourists and trekkers out of hospitality.

However, a number of overly excited trekkers ride their bikes to the pinnacle as early as four or five in the morning in the hope of watching the sunrise, ignoring the fact that the area is a military zone to which access is limited.

Over a month ago, leaders of the radar station put up a barrier and a sign that read “Military Zone – No Access Allowed” along the slope leading to the pinnacle to curb the tourist “invasion.”