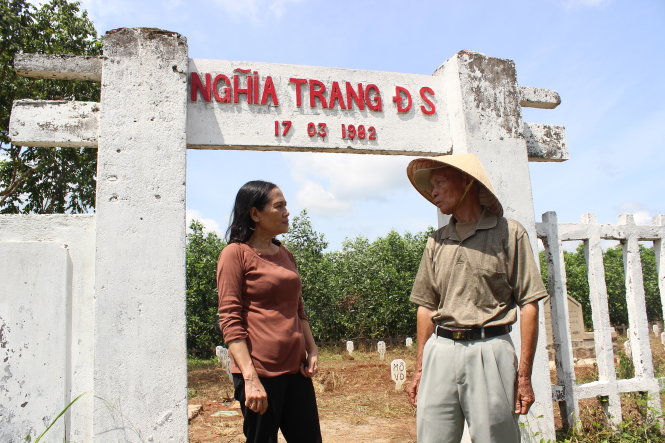 A cemetery near the Bau Ca railway station in the southern Vietnamese province of Dong Nai has maintained the memory of the deaths of over 200 people, 80 of whom are unknown, in a train crash 33 years ago.

The 12-car train was traveling from Nha Trang City, which is the capital of the south-central province of Khanh Hoa, to Ho Chi Minh City.

Decades later, many tombs in the cemetery remain unknown, and few relatives visit to give the dead burning incense, as is the tradition of Vietnamese people.

Vietnam was suffering great economic difficulties at the time, and most passengers aboard the train did not have a ticket.

They boarded the train, which was carrying both cargo and passengers, to smuggle small goods, including daily necessities that were rare during the state-subsidized economic period.

A return to Tay Hoa

Tuoi Tre (Youth) newspaper reporters followed a woman whose older brother and sister in law died in the accident.

She is Tran Thi Cam.

She said her family was informed of the accident a month after it happened, and had no choice but let her brother and his wife lie in the strange land near the Bau Ca railway station as the unknown because they even had no money for daily food then.

Cam only began tracing clues to find the tombs of her relatives last year, but has failed so far.

The woman was only told that her brother and his wife were among 80 unknown people buried in the cemetery.

Nguyen Thanh Son, a guard of the railway section where the accident happened, recalled, “Me and five or six other guards were at the Bau Ca station and heard the big sound of a crash.

“Twelve wagons were thrown dozens of meters away from the railway. The locomotive was lying upside down halfway a hill.”

He said the accident occurred at about 5:00 am, when it was still dark, and all the bodies were carried to an empty piece of land some three kilometers away for burial.

Now, over 80 small tombstones which say ‘unknown’ lie the cemetery, which was only ‘upgraded’ last year with whitewashing and cut grass thanks to the support of Tran Kim Hoat, the owner of a fruit garden next to the cemetery.

He recalled that he was praying in the local Loc Hoa Church at the time of the accident.

He said he joined local authorities in digging 200 tombs in the afternoon of the fatal day.

The cemetery has only one named tomb of Nguyen Thi Minh Vo, since the victim, born in 1945, had her personal papers with her.

Nguyen Thi Dao, a witness and survivor of the accident who was five months pregnant at the time, said she, her husband and a three-year-old child were in the same wagon carrying bags of bran.

The product cushioned her entire family from injuries in the crash, Dao said.

“Nine out of every ten passengers aboard the train were smugglers who earned some rice for their families. All residents living near the Hoa Hung railway station in Ho Chi Minh City were doing the same thing on trains,” Dao said.

She and her husband were too.

To force a train to stop where passengers wanted, they unplugged an air tube installed at the joint between wagons.

All smugglers on the trains knew this, Dao said.

When the train stopped and mechanics came down to repair it, this gave smugglers enough time to load and unload their cargo.

“On the fatal day, an air tube was unplugged, but the train driver tried to continue driving instead of stopping, and I knew that there would be trouble,” Dao said.

All the wagons were thrown into the air and rolled. Passengers were both hit by the crash and crushed by cargo inside.

Dao said she and her family quit the job after that.