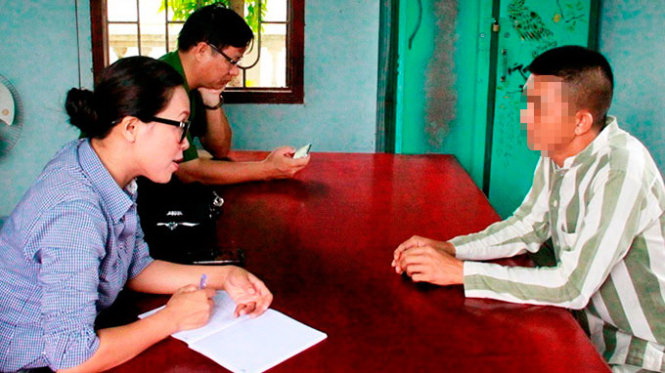 Vietnamese convicts’ children – Part 3: Where is my child?

A number of parents who are serving jail terms repent of their crimes, causing them to part with their beloved children for years or even permanently.

>> Vietnamese convicts’ children – Part 1: How badly they need their parents

A heart-to-heart between a Tuoi Tre (Youth) newspaper reporter and P.H.H., who is serving a life sentence for murder in Division 2 of Thu Duc Prison, located in Ham Tan District in the south-central province of Binh Thuan, was constantly interrupted by waves of emotion the other day.

H., now 37, was brought to tears whenever he mentioned his 9-year-old daughter, who he has not seen for a long time.

After he got married, he moved to his in-laws’ home in the outlying district of Hoc Mon in Ho Chi Minh City.

H.’s mother-in-law, who treated him as if he were her own son, incurred debts as a result of her loss-making estate transactions.

On a fateful day around seven years ago, when debt collectors made a fuss and yelled at H.’s mother-in-law, he tried to protect the woman.

At the climax of the brawl, H. knifed one of the debt collectors and claimed that person’s life.

“I was petrified then. I dropped the knife and held my sleeping baby daughter, almost two years old then,” he recalled.

“I instantly knew that would probably be the last time I would embrace my little girl. Right after that I phoned the police to give myself up.”

H. added that initially his wife visited him in prison, before she remarried and took their daughter with her.

N.T.L., who is serving her sentence for drug trafficking at Thu Duc Prison, is pictured during a compulsory labor routine. Photo: Tuoi Tre

“Since then I have lost contact with her and my daughter and am clueless as to where they are now. I sometimes write to my little daughter and address my letters to my in-laws, who I hope will pass them on to her,” he revealed.

H. added he and his ex-wife kept their girl in the dark about her father’s imprisonment so that she would not suffer stress later.

The haggard-looking man added his greatest source of solace now is a few photos of his daughter and the letters she sent which his in-laws handed him.

“If I am ever released from prison, all I wish for is hugging my daughter,” he said wistfully.

H.’s aging mother, in her late 70s, told the reporter that she had not seen her granddaughter for years.

One of the women is N.T.L., who is doing time for trafficking drugs.

She revealed that compared to other inmates, she has been assigned less physically demanding tasks that fit her old age and rheumatism, including taking care of greenery in the garden.

L. told the Tuoi Tre reporter that one of her children is serving her own sentence in the same detention center.

“It was me that involved my own daughter in the drug trafficking ring, which has resulted in her jail term. I’ve never stopped feeling guilty and full of remorse for that,” she said.

The woman added that though they are not in the same cell, she has sought relief in seeing her daughter each day when they perform their compulsory labor routines.