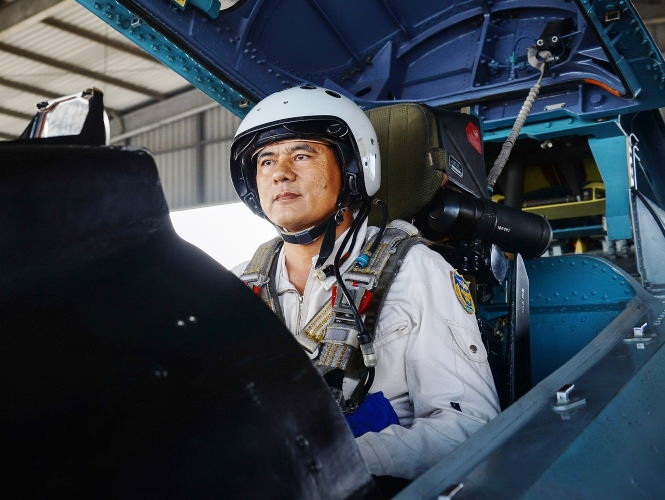 There is no room for error when it comes to drill flights using live rounds in Russian-made Su-30MK2 fighter jets.

On their third day at the 935 Fighter Jet Regiment in October 2015, Tuoi Tre (Youth) newspaper reporters were treated to a spectacular flight drill using live ammunition.

The drill, jointly carried out with Infantry Division 330 in Military Zone 9, deployed two cutting-edge Russian Su-30MK2 fighters, along with their Su-27 predecessor.

The state-of-the-art Su-30MK2 supersonic aircraft boast the unrivalled power of a king cobra thanks to their advanced avionics, all-weather capability, and long-range endurance.

Pilots from the 935 Fighter Jet Regiment were tasked with maneuvering their two Su-30MK2 jets as a team, bombarding imaginary targets in a mountainous area.

When showtime came, the two Su-30MK2 fighters took off in formation with two real bombs onboard.

“All eyes were on our flight, which would be closely observed by officials from the Ministry of Defense, Air Defense-Air Force of Vietnam and the division,” Colonel Tran Quoc Toan, a seasoned pilot, said.

“The pressure is overwhelming, as we pilots are supposed to hit our targets with great precision,” he added.

Lt. Col. Tien, the formation leader, explained that their job would involve piercing the air at a height of 4,200 meters and dropping bombs at the target.

“The task is considerably less challenging for individual pilots, but flying in formation requires the preceding pilot to facilitate his colleague to keep up with him and complete the mission flawlessly,” he noted.

“Layers of cloud can be some hundreds of meters thick,” Lt. Col. Tien added.

Upon receiving an attack command, he and his teammate descended to a low position from the height of 4,200 meters, penetrating thick clouds before being able to pinpoint the target.

The ‘King Cobra’ maneuvered by Lt. Col. Tien and Captain Vu Dinh Thi then sped ahead, aiming at the target before nose-diving and launching a rocket at the ‘enemy.’

Firing rockets and releasing bombs are a technically demanding skill in flight, and require pilots to have a large number of flying hours under their belt, according to Lt. Col. Tien.

This day’s drill was considerably more exacting, as it was the first session to adopt the coordinated firing method.

A group of technicians install bombs on a Su-30MK2 fighter jet before a major drill in October 2015. Photo: Tuoi Tre

When the drill came to an end at 8:40 am, the two Su-30MK2 fighter jets returned to the base in one piece.

Pilots from the regiment had similarly succeeded during a previously observed training flight in late December 2013.

The four young pilots, in their Su-30MK2s, were entrusted with launching live rockets into an assumed target.

The daunting part about that drill was that the Su-30MK2 aviators, for the first time ever, had only been informed about the target’s coordinates and raid duration but kept in the dark about what the target was.

They were also expected to fire their rockets at lightning speed and with great precision.

The ‘King Cobra’ jets fly at twice the speed of sound, leaving their pilots only two to five seconds to locate the target, switch directions, aim and fire.

“Any wrong move during firing poses a threat to their teammates who are ‘stalking’ a target,” a commander told the Tuoi Tre reporters.

The first-ever deep-sea attack drill flight, taken part in by the regiment’s Su-30MK2 in April 2014, is another source of pride.

The Su-30MK2 squadron braved hostile weather to drop four bombs precisely at a presumed target in the sea.

“Locating the target required us to fly beneath the clouds, an extremely dangerous act. With several naval ships in the water, a missed target would spell disaster or even result in fatalities,” Colonel Tran Quoc Toan, a seasoned pilot, said.

He proceeded to then shrewdly direct the squadron and adopted a different approach.

Eight years ago, when the Vietnamese air force launched the Kh-31A ramjet supersonic anti-shipping missile in Cam Ranh, located in the south-central province of Khanh Hoa, for the first time ever, Col. Tinh and pilot Nguyen Van Phuong were tasked with steering the Su-30MK2 that would carry out the mission.

In 2012, Col. Tinh and pilot Le Van Hoi were also selected for testing KAB-500KR, an electro-optical TV-guided fire and forget bomb developed by the Soviet Air Force in the 1980s.

He and his colleague again performed exceptionally well during the country’s milestone drill.

“The weapon was new in Vietnam then, and we had not been trained by Russian experts yet. Pressure was mounting. I carried out the warfare drill after perusing numerous documents in Russian,” he revealed.