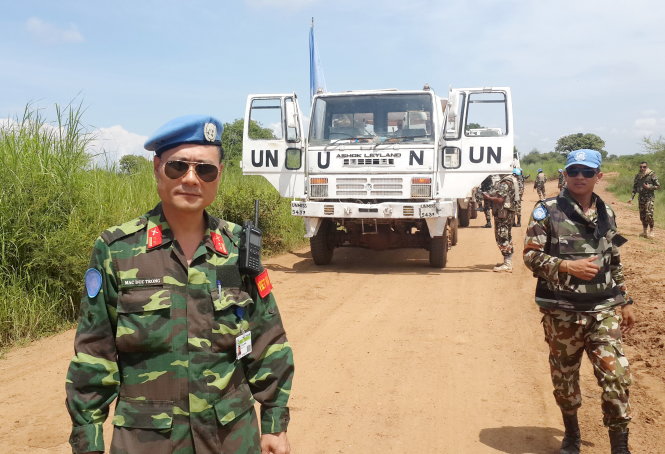 One of Vietnam’s first two army officers to undertake United Nations’ peacekeeping missions was through multiple heart-wrenching moments as he was stationed in South Sudan two years ago.

Senior Lieutenant Colonel Mac Duc Trong was positioned in Melut, a town in South Sudan's troubled Upper Nile state in the country’s northernmost area, months after he and another Vietnamese officer arrived in early June 2014.

Melut was a war zone rife with fighting and killings.

Unlike in Juba, South Sudan’s capital, no buildings were seen in Melut.

“When I arrived in Malakal, the heart of Upper Nile state, refugees were in such dire straits that they flocked to the UN base, yanking out water pipes in restrooms for water to cook food and drink,” Trong recalled.

During the rainy season, to his astonishment, he saw more than 1,000 people, dogs, and goats huddled in the muddy UN base.

“I’ve never seen such a ghastly scene in my life,” the officer observed.

“Civilians entered the base and pinched whatever they needed. Restrooms and houses were all locked,” said Sr. Lt. Col. Trong.

People in Melut lived in temporary cottages made from grass, straw, and mud, as their houses and properties were all burned by militias in the area.

Malakal was a principal battlefield that often witnessed fighting between government troops and opposing factions.

Past battles in the area saw the destruction of signal emission stations, rendering peacekeepers unable to contact local authorities. Telephone lines were usually not operational.

Like other communications officers, Trong’s job was to negotiate with all parties involved in the conflict to ensure no UN planes got shot.

“We worked with leaders of the groups in control of the areas, and tracked down losing forces in hiding or on the run to make sure they did not shoot down UN planes,” he said.

They once gunned down a UN plane, which created a need for communications officers to assert the level of flight safety in the area.

Following an attack on a refugee camp in Melut, civilians were offered shelter in a container. Photo: Mac Duc Trong

In times of escalated conflict, international relief efforts came to a halt, with most humanitarian organizations retreating to the UN base.

A communications officer was also tasked with negotiating with leaders of different sides to allow the resumption of relief efforts that brought food and necessities to thousands of starving civilians.

One type was camps under the UN’s protection; the second was camps located outside the UN base that received foreign sponsorship; and the last was refugee areas in North Sudan.

“Many peacekeepers working in training, diplomacy, ordnance, and administrative procedures did not go out and meet people,” the military officer said.

“We communicators were on the move every day. Our hearts sank hearing that expectant refugees had gone for days without food or relief.”

Sr. Lt. Col. Trong accompanied five such shipments and relief packages over a waterway distance of more than 5,000 kilometers from South Sudan’s southern region to the northernmost localities during his one year in the country.

His group had 10 members from different countries, including Norway, India, Nepal, Ethiopia, Sweden, Switzerland, and Germany but that was only temporary as the members constantly changed as soldiers returned to their own country after concluding their service term at the UN.

As his army ranking was higher, Sr. Lt. Col. Trong usually did the negotiating with leaders of different sides.

In a country ripped apart by civil wars like South Sudan, most UN divisions find traveling by air the quickest way.

The UN base in Malakal had three battalions whose soldiers were exchanged on a weekly or monthly basis.

“All daily activities hinged on transport. Once there were no flights for half a month, leaving us really short on food. During escalated conflicts the UN canteen was closed, and there were no markets,” Sr. Lt. Col. Trong.

“The city [Melut] was a ghost town then.”