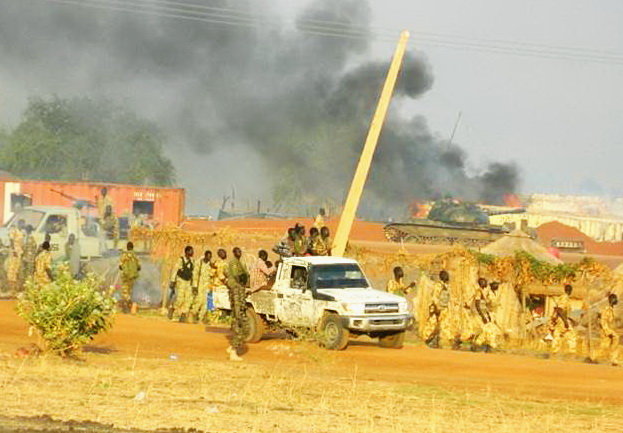 A UN base in South Sudan was attacked as one of Vietnam’s two first-ever UN liaison officers was about to wrap up his service in mid-2015.

In May 2015, without warning, a Shiluk separatist force clamped down on government troops in Melut County, an administrative area in the Upper Nile state of South Sudan.

Lt. Col. Mac Duc Trong, one of Vietnam’s first two UN liaison officers sent on peacekeeping missions and who was about to wrap up his service in July 2015, explained that the force had previously been on friendly terms with the government.

Later a deputy leader of the Shiluk force was killed during a patrol in an area inhabited by a tribe of the same race as South Sudan President Salva Kiir. The vice commander of the Shiluk military zone petitioned the president to probe the man’s death and bring the culprit to light, but the request was ignored.

The armed force later mounted an attack as part of a plan to occupy an oil well near the UN base.

“The area I was stationed in was under the control of government soldiers, who the Shiluk had to defeat if they were to seize the oil well,” Lt. Col. Trong added.

A hail of bullets

More than 100 international relief workers retreated into the UN’s peacekeeping base for refuge.

“During the fight, I stood behind a sand sack, watching them kill each other through binoculars,” he recounted.

“They searched for those hiding and shot them dead right in front of my eyes. I had to witness all these ghastly scenes and report the situation to the UN base.”

The base at that time had only four communications officers: Lt. Col. Trong and three others from Sweden, Nepal and Brazil.

“The insurgents kept firing shells at the base,” Lt. Col. Trong recalled.

The first shell smashed a water reservoir, which left the UN staff craving water right from the onset of the attack.

However, that amount was scarcely enough to be shared with more than 100 international aid workers taking shelter at the base.

“The area was like marooned land, with no electricity, water, Internet or telephone signals,” Lt. Col. Trong said.

On the first day of the insurgency, three civilians under UN protection were hit by shells and burnt to death while inside their tents.

Four more, including one child, lost their lives on the second day.

The five-day attack claimed a total of eight lives and injured dozens of others.

“There was hardly enough room inside the 300m² tunnel for a total of more than 200 UN personnel and international aid workers,” Lt. Col. Trong added.

Of over a thousand refugees, a number were injured, with some hit by shells and having their intestines exposed.

A few aid workers, who were doctors at field hospitals, insisted the UN staff set up a makeshift operation theater.

“That was something beyond our reach. We could do nothing to help critically injured people,” Lt. Col. Trong said sadly.

During the five days of attack, he and others lay under the sun as the tunnel, which had no lid and was shallow, shielded refugees from heavy machine guns and AKs but offered little protection against shells.

“During the bombardment, we got by on instant noodles, and could not afford to take off our bulletproof vests even during sleep. At one time, a shell dropped near where I was lying. I narrowly cheated death,” he described.

The escalating violence on the fifth day called for an emergency evacuation from the base.

The entire UN staff and international relief workers would leave, while only infantry soldiers would stay and protect refugees.

The problem was how to safely evacuate 200 staffers from the warring zone.

“The UN initially planned to land 10 choppers in the base and pick up the UN staffers and aid workers,” Lt. Col. Trong revealed.

“I found this approach too dangerous, as the attackers had defiantly fired on the UN base and would not spare the helicopters.”

The UN also considered using the ferry as the river was only 300 meters from the base.

However, taking the ferry and covering 250 kilometers by road were not feasible options either.

Armed with a deep knowledge of the local terrain and potential hazards, communications officer Trong proposed a swift evacuation in armored vehicles and then by plane.

Knowing an airport around 40 kilometers from the area, he contacted the UN Mission’s Command Center in Juba, the capital city of South Sudan, to seek consent from the government to use the airport for an evacuation campaign.

Upon receiving the government’s permission, the evacuation began.

At the time, Juba was experiencing a scarcity in drinking water, as bottled water suppliers refused to sell due to a drop in the value of currency.

After thorough consideration, the UN decided to take the 200 staffers to Juba as the relief planes could not travel long distances.

“The staffers were given half-an-hour notice only. We only took necessities that we could not do without,” Lt. Col. Trong recalled.

The evacuation was a success with no human casualties.