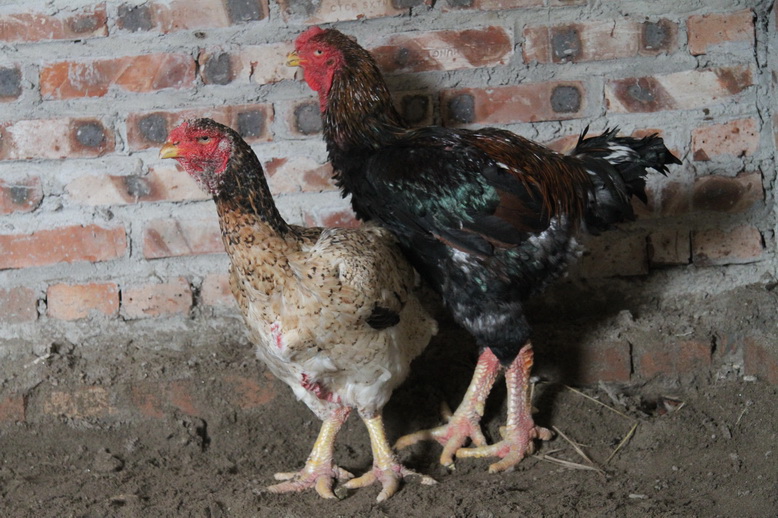 Experts and aficionados across Vietnam have made relentless efforts to conserve and breed an indigenous variety of fowl that has been around for hundreds of years, including by entering them in ‘beauty pageants.’

The Ho Lac Tho chicken variety, native to Thuan Thanh District in the northern province of Bac Ninh, has long made its way onto Dong Ho folk woodblocks, created by craftspeople from Dong Ho Village in the same district.

The Dong Ho woodblocks are a fixture among rural families in northern Vietnam during Tet (Lunar New Year), with 2017 nominated the Year of the Rooster in the lunar calendar.

This year’s Tet starts on January 28, with the festive atmosphere lingering for weeks after that.

In the woodblocks, the Ho Lac Tho fowl are depicted, with the cock boasting rich plumage, a stretched tail and an imposing gait, while his equally stunning hen tends to their young brood.

Members of the Vietnam Ho Lac Tho Chicken Club, based in Thuan Thanh District, recently celebrated their first anniversary with a display of their best-looking birds.

Their hen's plumage is a bright shade of brown, or the color of ripe longan shell, and is dotted with overlapping patterns.

Meanwhile, their prize cocks swell with pride over their remarkable height and sturdy legs while displaying a crest resembling an upside-down strawberry.

These pairs will vie with one another to be crowned kings and queens of a pageant to be held shortly after Tet.

Nguyen Dang Chung, head of the Ho Lac Tho Chicken Club, currently keeps nearly 20 of the sought-after variety at home.

The record, however, is currently held by Nguyen Van Truong, a motorbike repairman.

Truong and his brother’s flock brought home seven out of nine awards, including single cock, single hen and cock-hen, at the 2016 Spring Chicken Beauty Pageant.

His single-cock winner weighs 6.3 kilograms and boasts a round creel-like tail, a large, sturdy head and a crest resembling that of the ‘sit’ bird.

The rooster beat 12 other finalists to earn the crown.

The rooster in a Dong Ho woodblock, one of Vietnam’s signature folk art genres.

Only cocks and hens weighing 4.5 kilograms and 3.5 kilograms respectively are eligible for the contest, according to Chung.

“However, the contenders will be eliminated immediately if they are found to have even the slightest amount of food in their craw,” he added.

Fifty eligible pairs entered the qualifying round at the 2016 spring competition with 13 pairs advancing to the final.

“Ho Lac Tho flocks these days are only 75 percent pure-breds, so none are endowed with as perfect a physique as their predecessors,” Chung said wistfully.

At that time the cocks weighed a whopping eight kilograms each, Chung added.

According to Truong, who keeps a prize-winning 6.3-kg rooster, a dazzling cock must meet five physical criteria, include a dark blue or plum plumage; yellow or whitish yellow legs; and a crest resembling that of a ‘sit’ bird or a strawberry.

He is also expected to have clam-shell wings and a round tail shaped like a creel.

Meanwhile, a hen is most admired for her clay-coloured coat.

Such gorgeous-looking hens are, however, the least fertile and caring toward their chicks, Truong noted.

Dao has purchased and paid maintenance fees for all the Internet domains connected to the Ho Lac Tho fowl variety, and plans to transfer all these domain names to residents in Lac Tho Village in Thuan Thanh District, where the prized flock comes from.

He made friends with Chung, Truong and other enthusiasts and visited them in the village.

The like-minded friends have been working together to expand the flock.

“From our own experience, only generous, helpful people can raise their chicks into imposing, gorgeous birds,” Truong observed.

A Ho Lac Tho rooster in Lac Tho Village in northern Vietnam. Photo: Tuoi Tre

His passion for keeping ornamental poultry was passed down from his great grandfather, grandfather and father to himself and his younger siblings.

Truong and his siblings have been infatuated with the fowls from a young age, particularly the variety native to their hometown.

The fowl fetched low prices back then and were even cheaper than normal variety chickens.

Fledglings are now available for VND150,000 ($7) apiece based on advance orders only.

Truong has shared his expensive chicks for breeding purposes with other keepers at nominal prices.

He lost 25 cocks weighing five kilograms and above each and around 40 hens to an epidemic in 2013, he recalled.

The man started afresh with different broods offered by his fellow poultry keepers, and now takes great pride in his flock of approximately 400.

“Our long-held aspiration is that we build a pure-bred flock just as those more than a century ago. Lecturers from the Vietnam National University of Agriculture are assisting us with in-vitro fertilization,” Truong revealed.

“I’m convinced the breed will enrich our hometown, both materially and culturally, as all people know about our hometown are the relics and Dong Ho woodblocks,” he asserted.

Around 100 out of 800 households in Lac Tho Village have raised the indigenous fowls in their yards.

Some keep only a few pairs of chicks for pleasure, while others have made a decent living out of their large flocks, earning an advance of VND100 million ($4,378) per year.

The Ho Lac Tho Chicken Club currently boasts a membership of almost 7,000, who come from across the country and different walks of life.

“Though there has yet to be research done on Ho Lac Tho chicken flesh, its low-fat meat and crispy skin have proved tempting to local consumers’ palate,” Nguyen Van Duy, from the Vietnam National University of Agriculture, noted.

The university is currently conducting research on the genes and flesh of prized native poultry breeds, including the Ho Lac Tho variety.

“We’ve succeeded with in vitro fertilization on the Ho Lac Tho chicks and are looking to implement it on breeders’ flocks,” he added.