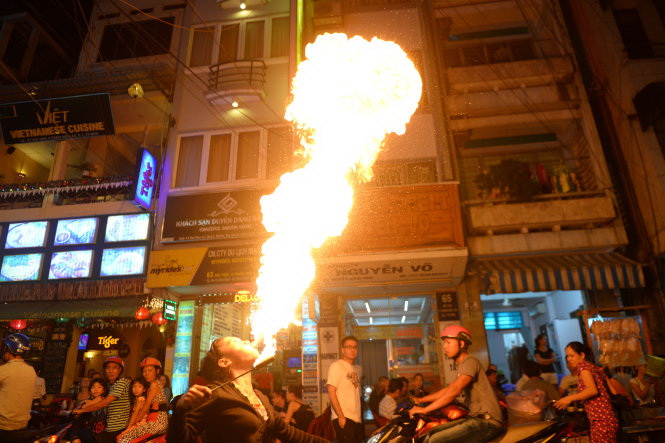 A number of poor women and young teenagers have been giving more heat, literally, to sidewalk beer stalls across Ho Chi Minh City, performing fire-breathing acts as a means to eke out a living, despite the obvious health hazards.

People clinking beer mugs at sidewalk pubs across the city, particularly in the downtown area, are familiar with street performers who give performances that include dancing like the late ‘king of pop’ Michael Jackson, in an effort to capture diners’ attention and then sell candy or lottery tickets.

Fire-dancing and fire-breathing have been the latest additions to the performers’ repertoire in recent years.

A handful of street performers, some as young as 11, have jumped at the chance to make a living by performing dangerous, awe-inspiring fire-breathing stunts over the past few years.

Among them are three teenage boys who have worked together over the past four years and formed their own unofficial fire circus.

During a recent performance on Nguyen Thi Thap Street in District 7, Ha, 14, the group’s leader, made fire while Thai, 11, held it in his mouth and Tong, 11, danced with the flame by swinging his body and manipulating a torch.

The trio normally cycle to their performance venues which are sidewalk pubs in Districts 7 and 8 from 6:00 pm to 4:00 am in the morning, when their peers are sound asleep.

Among the three youths, Ha is the only one to have attended school, dropping out after finishing the first grade, while the other two have never been.

Ha is also the most fortunate in that his parents are still alive, while the other two boys are both orphaned.

Ha taught himself the fire-breathing art before passing it on to the two neighboring children and forming the group to earn a living.

At around 11:00 pm one day, sidewalk pubs on Bui Vien Street, in the backpacker quarter in District 1, were packed, and teeming with locals and visitors alike.

Out of nowhere came a shout and everyone turned round to see a lanky woman standing on the street, breathing fire with the imposing gait of a dragon.

After three exhalations, the woman’s jacket flap was soaked in kerosene, but, impervious to the danger, she continued to pick up the glowing embers with her bare hands and hold fire in her mouth.

The woman is 37 year-old Vo Thi Hoa, known as ‘fire-circus Hai’ among her street performing colleagues.

A few days earlier, an against-the-wind exhalation had caused one of her fire balls to boomerang back at her.

By a stroke of luck she was spared from any serious burns.

Hoa continued with her fire-breathing performances a few days later.

Her scorched hair, swollen lips, and swarthy complexion due to constant exposure to fire give Hoa a haggard look.

After a series of fire-breathing gigs on Bui Vien Street, Hoa flopped down on the sidewalk of De Tham Street nearby.

“I’ve suffered a valvular heart disease for almost 10 years. I keep running short of breath blowing fire like this, so I must rest once in a while so that I can continue until the wee hours,” she explained.

She then switched to fire-breathing on the advice of her ‘coworkers.’

“I’m really scared, but I have no choice but to accept the dangers. The thought of rent, food and my kids’ education keeps me going,” Hoa said.

Previously, the market for street fire performances around Ho Chi Minh City was dominated by thugs.

Some years ago, after a notorious ‘Ms. He,’ who had manipulated venues in Districts 1 and 3, ‘retired,’ her gang disbanded. It was then that Vo Thi Sen, 33, Hoa’s younger sister, also known as Ba, grabbed the opportunity to switch from peddling chewing gum to performing fire-breathing stunts.

Sen looked fatigued due to her constant lack of sleep during a recent interview with Tuoi Tre (Youth) newspaper in a tiny rented room that reeked of kerosene in an alley in District 4.

She said she was only able to gulp down some rice and small morsels of food in each meal, as the smell of kerosene in her mouth caused her to burp relentlessly.

The skinny woman looked much older than her age, with a gaunt, weather-beaten face and singed hair.

“We’re just doing it for the money at the moment,” she said. “We know for sure we will contract illnesses later.”

She also explained that her tongue is invariably cut from chewing and swallowing razor blades as part of her curbside show.

Another among the nearly dozen ‘fire circus’ street performers in the inner districts of Ho Chi Minh City is Ky Ky, a 16-year-old deaf-and-mute girl who has wowed everybody with her exceptional skill and daring fire-breathing.

The orphaned and uneducated girl, who had peddled as a child, can exhale long breaths of flame and regularly holds coal and fire in her mouth.

Her disability prevents her from making herself known to her clients, with Hoa the only co-worker who can make out her sign language.

Ky was married to a fellow fire circus performer at an early age.

Two years ago, her husband was sent to a rehabilitation center for using meth, leaving her alone to struggle with different jobs in order to support her grandmother and husband.

Hoa lamented that she also suffers a burning throat and persistent itches and rashes on her chin and wrist due to her constant exposure to kerosene.

She sometimes even gulps down mouthfuls of paraffin by accident.

Hoa has been married twice, but both men are now serving jail terms.

Similarly, Sen parted with her husband and rented a room to live with her elderly mother and two children.

“I’m set on giving my children a proper education so their life will be better than my own and my mother’s,” she said.