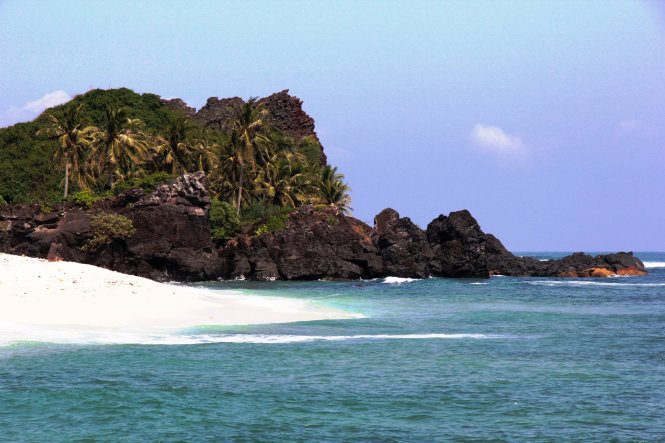 An islet in Ly Son, an emerging retreat in the central province of Quang Ngai, has become a magnet for visitors in recent times, prompting islanders to take courses in tourism.

‘Be’ (meaning small), Islet is part of the Ly Son Island District in Quang Ngai Province.

Ly Son Island has recently become popular for its stunning landscapes formed by volcanic eruptions millions of years ago.

The island has also long been known as a “kingdom of garlic” as well.

Vacationers who have made it to Be Islet have said that a trip to Ly Son isn’t complete without spending some time there.

The islet, which has retained its pristine charm and tranquility, and whose residents are as hospitable and caring as ever, offers holidaymakers an authentic  and harmonious experience.

The new-found fame has sent residents rushing to attend tourism courses to tap into the potential of the new market.

Tourists can hire speedboats to reach Be Islet from Ly Son Island. Unlike around three years ago when there was only one boat ride to the islet per day, the speedboats are now on hand at all times.

Boasting unspoiled serenity, Be Islet is in contrast to Lon (Big) Island, which is approximately three nautical miles away.

The only noise heard on Be Islet is the gentle sound of waves lapping volcanic mountain flanks, and remains home to 34 locations rich in volcanic sediment, despite it being less than 1.2 square kilometers in area.

According to Professor Ibrahim Komoo, vice chair of the United Nations Educational, Scientific and Cultural Organization (UNESCO) Global Geoparks Network, Be Islet is home to strata built up from volcanic eruptions that occurred millions of years ago.

The site also prides itself on a volcanic sedimentary tract spanning an area of 40 square kilometers both on land and under the sea floor.

With proper conservation and promotional efforts, the tract, which provides a rich haven for wildlife, has the potential to draw tourists from around the world, he noted.

Apart from resplendent landscapes, hospitality, which has long been a virtue of the Ly Son islanders, Be Islet has already won vacationers’ hearts.

The entire island is sparsely populated, including less than 100 households, all of whom are more than willing to guide tourists to Mr. Cao’s Cat Temple and Ms. Huynh Ngoc Thanh Temple.

Mostly working as fishermen, Be islanders traditionally worship Lord Nam Hai, or the whale, who is believed to provide them shelter from storms.

When coming across a dead whale, they will bring it ashore to bury and worship it in temples.

Visitors to Be Islet can join local farmers in growing and harvesting garlic and shallots, or fish with the local fishermen and enjoy grilling their catch on the beach at night.

Nguyen Van Le, chair of the People’s Committee in An Binh Commune, where Be Islet is located, said that he and other officials are taking tourism classes taught by experts.

“The islanders are still struggling to earn a decent living despite the recent popularity of our hallmark garlic and shallots. We haven’t yet made the most of what we have,” Le said.

Almost all of the adults and even some elderly and physically challenged people are taking part in the classes.   Bui Hoang, in his 80s, often raises questions to the experts during the sessions so that “local youths can learn how to offer tourism services properly.”

The islanders now know the mounds on their islet were formed through volcanic eruptions 11 million years ago, and have learned how to keep their neighborhood free of litter in a bid to promote sustainable tourism.

Dr. Chu Manh Trinh, of the Cu Lao Cham (Cham Islet) Sea Reserve Management in Hoi An City in neighboring Quang Nam Province, has expressed his appreciation of how active Be islanders are in offering tourism opportunities by buying electric cars and setting up eateries.

However, questions raised by the locals remain similar to those asked by Cham islanders around 10 years ago, he noted.

Trinh said there remains plenty of room for improvement in terms of infrastructure and services if the local administration and islanders are to fully tap into their islet’s rich potential.