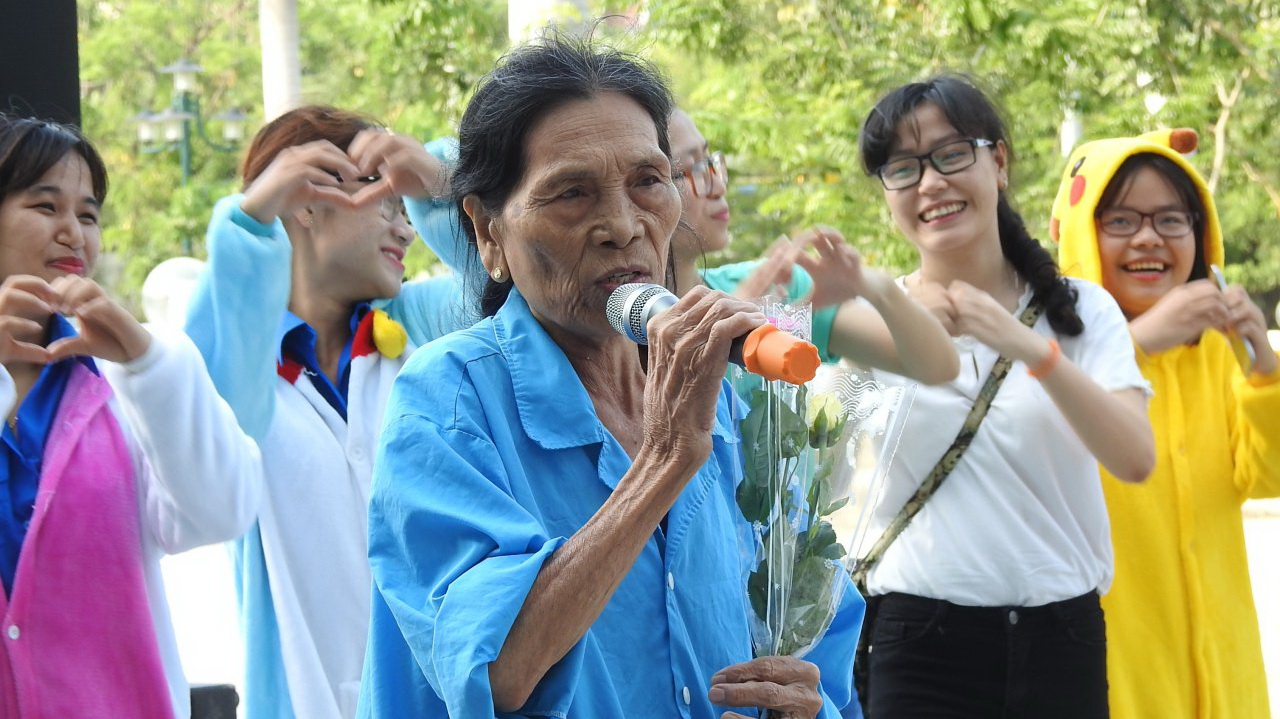 Terminally ill cancer patients at a hospital in central Da Nang City are singing their pain away during regularly scheduled music nights designed to keep them strong both physically and mentally.

Performers in green patients’ robes singing their hearts out to an eager audience of other hospital-bound patients has become a bi-nightly event at the Da Nang Oncology Hospital.

The project, ‘Sing to be heard’, is part of the hospital’s ‘One picture, many hopes’ initiative to help patients stay optimistic and strong while undergoing treatment.

Nearly 100 of these musical nights have already been held, lifting spirits and giving hope to terminally ill patients.

By 4:00 pm, when the sun had nearly set, the small yard inside Da Nang Oncology Hospital was filling with an audience eager for what was sure to be a spectacular performance.

Cancer patients of all ages settled into their seats.  Those too weak to be left on their own were accompanied by a volunteer.

The energy and excitement exuded by the audience was starkly juxtaposed to their pale, exhausted appearance.  For them, even sickness and breathing tubes couldn’t spoil the performance to come.

After an opening performance by hospital volunteers, 70-year-old Truong Thi Quy was the first patient to take the stage, explaining that she’d have to finish in time for her chemotherapy session scheduled for later that night.

With one hand resting on her belly, an attempt to calm the pain of her stomach cancer, Quy mustered a performance worthy of the roaring applause that followed.

“These kinds of activities help keep us strong and give us support in overcoming our pain,” Quy said. “Eating is no longer a pleasure to me, but this is like a mental feast that brings hope to my mind.”

For patient Mac Van Dieu from south-central Quang Nam Province, the music nights are as effective as medication in treating conditions.

“I’m happy as long as I can still sing,” Dieu said. “It’s a precious medicine that helps us overcome our fears and physical pains.”

As the crowd grew thicker, the event became more and more lively, with a sea of hands consistently raising to request a turn on stage and smiles becoming contagious across the audience.

From the upper floors, patients too weak to watch from the courtyard listened through open windows to the 15 different songs performed by the hospital’s patient-signers.

The ‘One picture – many hopes’ project involves activities ranging from the ‘Sing to be heard’ musical nights to auctioning paintings, pictures, and photos by cancer patients to raise medical funds for those in need.

Since its inception, the program has attracted over 200 volunteers from Hanoi, Hue City, and Ha Tinh Province.

Dong’s father was a cancer patient himself, whose death from liver cancer prompted him to take action to support the cancer community.

The time Dong spent looking after his ill father during his last days helped him realize how much mental support means to cancer patients and the importance of supplementing medicine with mental therapy.

The arts, to him, is a perfect way to help patients develop a positive mentality while battling cancer.

The program has since received tremendous support from the administration of Hai Chau District and the local medical and business communities.