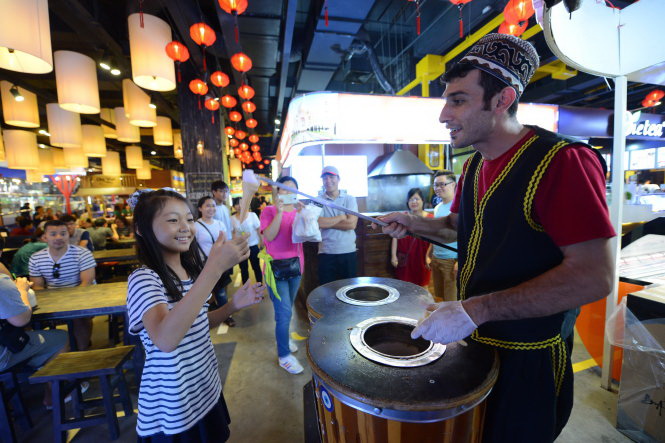 Residents and tourists in Ho Chi Minh City can now enjoy the experience of popular foreign specialties in the laid-back atmosphere of eateries located underneath malls in the city’s bustling downtown area.

Visitors to the Asiana restaurant quarter in District 1 can presently relish an array of dishes from Vietnam and many other Asian and European countries.

The food court, consisting of approximately 1,500 m² in the Block B basement of 23-9 Park, began operating just over six months ago.

The owners of the 40 stalls have each gone to the lengths of hiring foreign chefs to ensure their food’s authenticity.

During a recent visit, one Tuoi Tre (Youth) newspaper reporter stopped at a Thai food stall.

The reporter observed that the ingredients and taste were no different than the dishes he had enjoyed in Thailand.

Solomon Bamdele Junior, a 39-year-old Nigerian national, revealed that prior to opening his stall, his Vietnamese wife had traveled to Thailand, where she learned to cook the country’s hallmark dishes and hired a chef who had worked there for three years.

They explained that it was the third day in a row that they had eaten Vietnamese food there.

“There is a plethora of Vietnamese food in this market, which has a cozy atmosphere. It’s a good way to explore Vietnam through its cuisine,” James, 26, said.

In another corner, Nguyen Thi Mai, 77, was savoring some family time with her children and grandchildren.

The elderly woman was reveling in dishes from central Vietnam, while her American son-in-law was enjoying pizza and her grandchildren indulged in Korean courses.

“Everyone has their own ‘treats’ in this food quarter. It’s where we usually spend our weekends,” Mai shared.

As observed by the Tuoi Tre reporter, the vibrant food court, which has been charming even the most discerning of guests, reminds visitors of its underground counterparts in Singapore.

In addition to the Asiana food quarter, Ho Chi Minh City is home to several other underground food courts including those located in the B3 Basement of the Vincom shopping mall in District 1, and the B2 Basement of the Takashimaya Mall at Saigon Centre, also in District 1.

However, one of the things setting the Asiana food court apart is its common space.

Stall owners need only worry about hiring quality chefs, as the parking lot, tables and chairs, dish washers and even diners are shared.

“We tend to have headaches around parking space, furniture and dining areas when planning conventional eateries. By contrast, all we care about here is preparing our food in the best and fastest way possible for customers,” Nguyen Tuan, one of the vendors said.

Friendly staff and quick service are also a high priority, as customers are spoilt for choice.

Though most stalls in underground food courts offer street snacks, the venues remain beyond the means of ordinary vendors because of what many are calling exorbitant rents.

Each square meter at Asiana is worth VND15 million (US$ 654) per month.

Despite the high rent, Vo Quang Duc Huy, who runs a beverage stall at another food court, embraced the concentrated trading area as an incubator for start-ups, as their investment is only one-third of what they would otherwise spend opening their shops elsewhere.

Phan Van Tam, manager of the Asiana food quarter, stressed cost efficiency and the benefit of such a variety of options for both vendors and diners.

However, not every shop owner found the rents reasonable.

The young man and his father have been selling their country’s iconic sticky ice cream in the Vietnamese metropolis since 2007.

The market is a favorite of young urbanites' because of its diversity and cozy atmosphere. Photo: Tuoi Tre

The duo have adapted the original taste and come up with nearly 20 new flavors suited to the Vietnamese palate.

Mustapa previously pushed carts at trade fairs and on Nguyen Hue Pedestrian Street, also in the heart of District 1, before opening his own store at Asiana.

He also met and married a pretty Vietnamese woman while running his ice cream business.

However Mustapa has found the rent in Vietnam considerably higher than in his own country, explaining that while here he can only afford to run a tiny underground shop measuring a few square meters for VND44 million ($1,918) per month, that sum would be enough for a much bigger space in Turkey.

Not to be discouraged the man, who takes great pride in being a Vietnamese son-in-law, is determined to make his business successful.