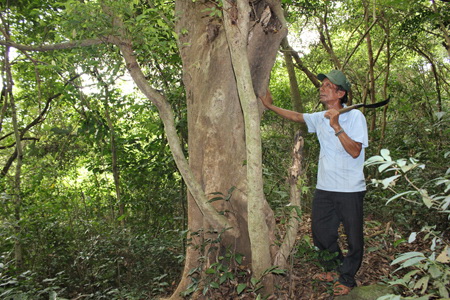 An elderly war veteran has spent most of the last four decades preserving a forest in central Vietnam.

Tran Duc Minh, 65, is considered by residents the ‘savior’ of a pristine forest that spans 36 hectares around Nhan Mountain, which has stood high in Tinh Son Commune, Son Tinh District, Quang Ngai Province for the past 39 years.

He recalls that while the war in Vietnam raged in the 1970s, the mountain and the surrounding wooded patches provided him and his fellow soldiers with an effective sanctuary from the enemy troop’s attacks.

The war invalid returned to his hometown and settled in a village nestled at the foot of Nhan Mountain in 1978, three years after the war ended.

However, his heart ached at the sight of the once verdant expanse being indiscriminately felled for timber and firewood.

“I kept wondering why the forest, which had survived wartime devastation, was falling prey to mindless villagers and illegal loggers,” Minh shared.

He then set his mind to driving illegal loggers away so that his comrades could rest in peace in the forest and villagers would benefit from their thriving asset.

The initial culprits were villagers, who chopped the trees for firewood or wood to build homes.

Minh went to great lengths to visit the villagers in their homes, convincing them to stop their logging, which would only hurt their long-term livelihood given that they would be unable to irrigate crops if their water supply was depleted.

Just as residents stopped exploiting the forest, illegitimate loggers began arriving in large numbers from other areas to prey on its expanse, only a stone’s throw from National Highway 24B.

With one tree felled every 15 minutes on average, the forest soon became bare of trees.

Safeguarding the forest then became a challenging, perilous task, as cunning, aggressive tree fellers devised various ways of defying patrols and did not hesitate to fight back if Minh was in their way.

The weather-beaten veteran is riddled with scars from injuries inflicted during chases and confrontations.

Two of Minh’s wartime comrades then also joined him. The trio formed a forest protection team assisted by residents committed to the cause.

Le Cao Hung, a former commando who recently passed on his forest safeguarding mission to his son, said the team members conduct patrols day and night and have never yielded to illegal loggers.

One afternoon around 20 years ago, the trio cornered an illicit logger, who climbed onto a rock and aggressively threatened to slash his chasers with a bush hook.

An idyllic hamlet is seen from the peak of the densely forested Nhan Mountain in Son Tinh District., Quang Ngai Province. Courtesy of Quang Ngai Newspaper

Without saying a word, Minh wrestled the man to the ground and subdued him with the kung fu techniques he had acquired from his time in the army.

“I am not deterred by your attacks, let alone your bush hook. But if I die, Nhan Mountain will still survive,” Minh told the man.

According to Le Cao Hoang, Hung’s son, who has now replaced his father on Minh’s team, Nhan Mountain, which faces the province's signature Tra Khuc River in the south, is home to a wide range of flora and fauna varieties, including centuries-old trees, ground doves and linnets.

“Thanks to his forest protection efforts of almost forty years, Chinh Spring brims with water all year round and is abundant with fish. Locals have also benefited greatly from forest beehives,” Hoang said.

As their reputation has successfully deterred unlicensed loggers in recent years, Minh and his two other team members now have another concern: ethnic minority people from Son Ha District who ravage the forest to corner wild animals and increase the risk of wildfires with their bee hunting activity.

“We sleep in the forest during the honey harvest season to make sure honey collectors do not do any harm to the trees and cinder does not fall onto dried leaves and spark fires,” Minh said.

His rule of thumb for fire is never smoke or light fires in the forest.

The elderly man added now that residents’ awareness of forest protection has improved, they collect only dried wood sticks for fuel instead of chopping live trees.

“Since 2011, the three of us have received VND1 million [US$43.5] per year, or less than VND1,000 [$0.04] for each member per day,” Minh revealed, adding that he never thinks about payment for his efforts.   Local authorities have also given each of them a rice growing allotment measuring approximately 1,500 square meters.

Minh is now planning to retire due to his own declining health and is seeking reliable successors.

Nguyen Thanh Son, chair of the Tinh Son People’s Committee, is highly appreciative of Minh’s efforts to sustain the wooded areas amidst the delta.

“Thanks to Minh’s reputation, despite the recent price hike in keo trees, [scientifically named Acacia], residents have not intruded on forested strips,” Son noted.

“Minh has drawn lines between residents’ land and pristine forested areas using rocks or tree trunks, but the forest has remained intact,” he added.

Nguyen Thanh Phuc, a local, said even young children in the area were aware of how to protect the forest.

“When Minh can no longer continue, we villagers will maintain his efforts,” he asserted.