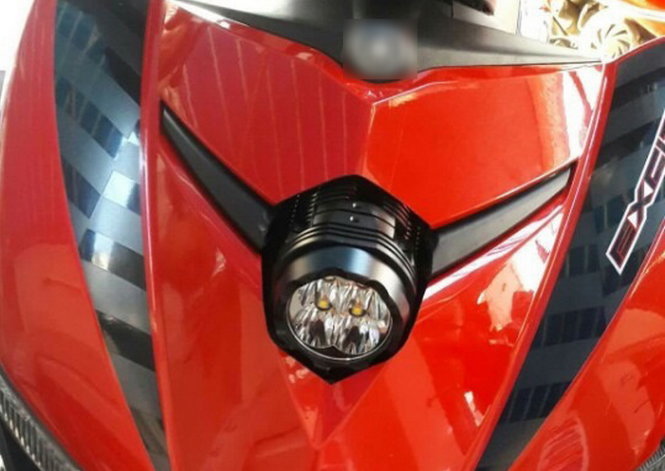 Vietnamese motorbike and scooter drivers are constantly looking for ways to make their prize vehicles standout.  Unfortunately, that often means sacrificing safety for style, as is the case with many drivers who opt for brighter headlights which can create dangerous situations after night falls.

In the blink of an eye, the shop’s employee presented a trove of different headlight options, all of which were advertised as “ultra bright.”

According to the employee, xenon headlamps are currently the most highly demanded headlight customization option for Vietnamese drivers.  Once more, they’re also cheap.

The installment process requires serious modification procedures to the bike, including drilling several holes into the vehicles electric circuit.

All of this extra work seems trivial compared to the potential results: a headlight so bright its owner will surely standout amongst the rest.

The same can be said for cars.

An employee named Can at an automobile mechanic shop on Ba Thang Hai Street, District 10, also greeted the Tuoi Tre correspondents with a collection of headlights at least three times brighter than normal stock lights.

Among them, bi-xenon headlamps were by far the flashiest, with an illumination rate of at least five to seven times greater than conventional halogen bulbs.

With just a few customizations, mechanics can install the these lights in either the high or low beam section of a cards headlight well so that a driver can light up all four if they so desire.

Compact LEDs are joining the fray as a quicker and safer alternative to xenon.

Unfortunately, the ease of their installment means that more and more drivers are chosing to amp up their lights.

According to Nguyen Hau Truong from Binh Thanh District, white or blue xenon headlamps are the easiest to find. Their medium-ranged prices make them an easy option for anyone looking to show off.

Truong also advised not turning on the high beam frequently, so as to avoid attracting unwanted attention from traffic officers.

Instead drivers should only use their souped-up lights  as a countermeasure against high beams from vehicles traveling in the other direction.

Augmenting a motorbike’s headlamp with strong light is not only against the law, but also decreases overall traffic safety.

Bus driver Le Minh Toan complains about the rising number of vehicles with augmented headlamps swarming the streets and blinding his sight.

“I swear they made me feel partially blinded. I couldn’t see anything even though I was trying to drive dozens of passengers. Who knows what would have happened if an accident had occurred?” Toan wondered.

Vu Tuan Thanh, an employee at an official motorbike distributor in Ho Chi Minh City, reflects on the dubious origins of customized bulbs, with “made in China” stickers.

Installing them can potentially damage the inner workings of a vehicle, making it easier for the electric system to short circuit and lead to fires and even explosions.

The bulbs’ circuits are also often incompatible with those of the motorbike; hence the chances of a battery explosion skyrocket.

Additionally, extreme lighting permeates more heat, making the vehicle more prone to overheat, which ultimately could lead to a fire.

“When there is trouble with your headlamp, taking the motorbike to an official mechanic shop is the fail-safe approach. You should also have the lamps regularly and appropriately checked for a safer traffic experience”, Thanh said.

Additional laws have also been proposed to aid the battle.

Besides fines, revoking of drivers’ license is also possible if officers deem it necessary.