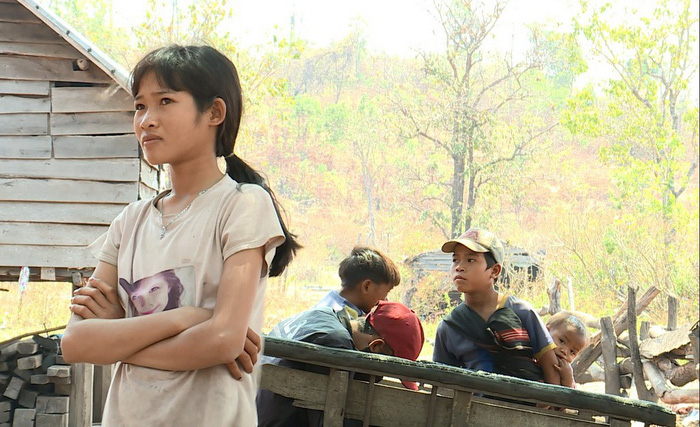 ​Abandoned village atop Vietnamese mount, where power, education, healthcare are a luxury

Residents of a village in Vietnam’s Central Highlands have been separated from the civilized world as the neighborhood sits atop a 1,000 meter high mountain.

They have no access to concrete roads, electricity, education and healthcare, and their names are never registered in the government’s books.

The mountain, situated at the junction of the borderlines of Chu Se, Phu Thien and Mang Yang districts in the Central Highlands province of Gia Lai, is the habitat of the Jarai people, one of the 54 ethnic minority groups of Vietnam.

Inside her traditional-style stilt house roofed with iron sheets which was burning under the overwhelming sun of the Central Highlands, Rmah Kam, an old Jarai grandma, was busy moving back and forth.

She was cooking lunch for her two grandchildren, who would be left in her care whenever their parents go to work on the field deep in the forest.

Rmah Kam was among the first to settle down in Cheng Leng some two decades ago.

Her well-kept identification card, issued by police in the erstwhile Gia Lai-Kon Tum Province in 1979, is no longer valid in today’s times, even though it is the only legal document supposedly proving her existence.

The rest of her family members had no documents at all, whether birth certificates or identification cards.

She and the two grandchildren then had a mo

The lunch of the grandma and children was far from meager, consisting of only rice and bland soup of wild leafy vegetables.

“Here we are short of everything, except the wild greens,” she said.

Her next-door neighbor is Ksor Djrih, who is also one of the ‘founders’ of the Cheng Leng village.

Djrih said that poverty and hardship was nothing out of the norm here, but life has been becoming more difficult as the village became crowded due to the rises in the number of big families and new settlers.

“We lack everything, [and] lacking water is the most miserable.

“No water for the crops, for drinking, for washing.”

“There are only two wells for the whole village, not enough at all. The more crowded the village becomes, the less water and more misery for us.”

No school, no hospital

Ksow Tho, Ksor Thoat, Rmah H’Lim and Rmah Lan spent time hanging around their stilt houses, awaiting their parents to come back from the field.

The kids, aged between 14 and 15 years old, are the first generation to be born in Cheng Leng, who never knew a day of going to school.

“I stay at home to look after my two siblings while my parents and two sisters go to the field,” Ksor Tho shyly said.

“The field is in the forest, very far away.”

The children speak no Vietnamese, but only their mother tongue of ethnic Jarai language.

The village is the whole and only world they ever know about since birth, and possibly for the next many years of their lives.

Sitting at the gate of his house, Rmah T’rui blankly stared at a random vacant space in front of him.

While he was supposed to go to the field like most of the adults of some 20 households in the village, T’rui had to stay at home to look after his two children for the last few days. They were badly ill.

“Perhaps they were sick from the bite of forest mosquitoes. I used to be bitten. It takes a really long time to heal,” he said.

T’rui has recently moved to Cheng Leng from a village at the foot of the same mountain, where he had no field to grow crops, struggling to make ends meet for his small family.

He did not know for sure if the children were really bitten by the mosquito, hoping that they would soon get better like he did.

In case things turn worse, he might carry them down for at least an hour on the only walking trail to a Jarai shaman living at the foot of Plei Cheng Leng Mountain for some traditional treatment.

Taking the kids to the nearest hospital, which already takes a day of travelling, will be the last option when the shaman gives in.

Local authorities are fully aware of the village’s existence.

It all started in 2004, when eight households with 40 people relocated to Cheng Leng from a village in Chu A Thai. The remaining Cheng Leng villagers came from other neighboring villages, mostly in Chu Se District, he added.

Toan said that authorities were scratching their heads on how to help the villagers.

Chu Se authorities might officially register the village into its geographic system, paving the way for local budget to be spent on building roads and power lines for Cheng Leng, according to Toan.

“But the infrastructure development would be extremely costly for the poor locality,” he said, putting estimates at a few dozen billion dong. (VND10 billion = US$438,500)

Another solution is to migrate the Cheng Leng villagers down the mountain, which is also deemed unfeasible as there are no available crop fields left for those farmers in the existing villages.

“The commune authorities have asked them several times to come down the mountain, promising them with household registration and citizen cards,” Toan said.

“But they kept saying no because there were no fields for them there.”

The official said he would report to the higher level which might come up with another possible solution.

In the meantime, little can be done for Cheng Leng and its children.