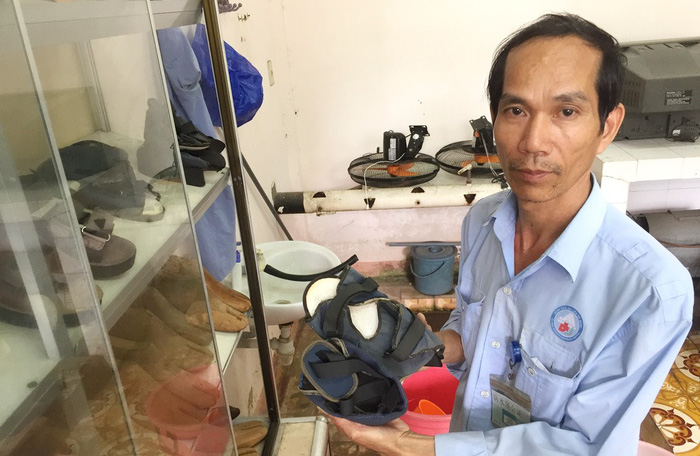 A Vietnamese man in Da Nang has spent a quarter century devoted to providing tailor-made shoes for the leprosy patients throughout the country’s central region.

A typical workday for Pham Anh begins with a walk through the Da Nang Dermatology Hospital.

Armed with a pen and a piece of paper, the 50-year-old stops in at each room, knocking on doors and carefully examining patients’ feet.  No, he’s not looking for diseases nor is he attempting to cure an unknown rash.

Pham Anh’s ‘customers’ all have one thing in common that makes finding the perfect fit considerably more difficult – they are all leprosy, also known as Hansen’s disease patients whose feet have been deformed the infection.

Kim Van Hung, director of the Da Nang Dermatology Hospital, said the clinic’s management works with Pham Anh as part of their mission to provide the best possible care, down to the smallest details.

“We care for them in many little ways, like making sure that they have shoes that fit so they can feel like their feet are as pretty as those of healthy people,” Hung elaborated.

Shoes of all shapes, but no sizes

Leprosy can attack several areas throughout the body of an infected patient.  When it spreads to the legs and feet, patients often need to have parts of their toes and feet amputated.

For some, the infection is so severe that only their hindfoot – the area consisting of the ankle and heel – can remain. In turn, each shoe is built specifically for each patient’s foot.

“Shoes for leprosy patients have no size, and none are the same as one another,” he said.

Though a daunting task, ‘Anh the shoemaker’ has spent the last 25 years designing shoes to fit those special feet, no matter the shape or size.

His work has extended to leprosy patients beyond the walls of the Da Nang Dermatology Hospital and into the surrounding districts and provinces.

And in that quarter century, how many shoes has he made?  Too many to remember, he told Tuoi Tre (Youth) newspaper.

Standing at his ‘workspace’ in the hospital, Anh proudly showed off two black, dumping shaped shoes, one round and the other bent in the middle, like a dented bracelet.

“These are the shoes I made for a leper from Hoa Vang District,” Anh explained.

“Forming the correct shape for the shoes is one thing, the other is choosing a suitable material for the sole so that there is a hard layer and soft cushioning to cover the feet.”

Though appearing relatively simple, that one pair of shoes alone took two weeks to build, every second of which was worth it, Anh said, when the patient first saw the pair and exclaimed “How well you made the shoes!”

Two weeks is short compared to many of the shoes Anh has made that have taken months to complete. The lifespan of the shoes isn’t guaranteed either. As the patients’ foot changes alongside the disease’s progress, a new shoe must be made.

Several of Anh’s customers have been working with him for decades. With each visit, he notes down their footprints, sizes, and personalities, in his notebook.

Sometimes, by the time the shoes are ready, the patient had already passed away.

“Whenever I start making a new pair of shoes, I work as if I am doing it for my own loved ones,” he said.

Anh has been the only shoemaker serving lepers in Da Nang for the last 15 years, since the Dermatology Hospital opened its department of leprosy.

Learning to make special shoes wasn’t a walk in the park for Anh.  He had to undergo a three-month ‘apprenticeship’ at the Quy Hoa Central Dermatology Hospital in Quy Nhon, the capital of the south-central province of Binh Dinh, to learn the ins-and-outs of the unique process.

After learning from a ‘master’, Anh ‘graduated’ the apprenticeship program with a certification as a shoe technician for leprosy patients.

Even though he is not a doctor, Anh is respected by many at the Da Nang Dermatology Hospital.

His wife also works in a leprosy hospital.

In the hospital where each person has a very different fate, he says, his leads a peaceful life, knowing he is doing such a special job.