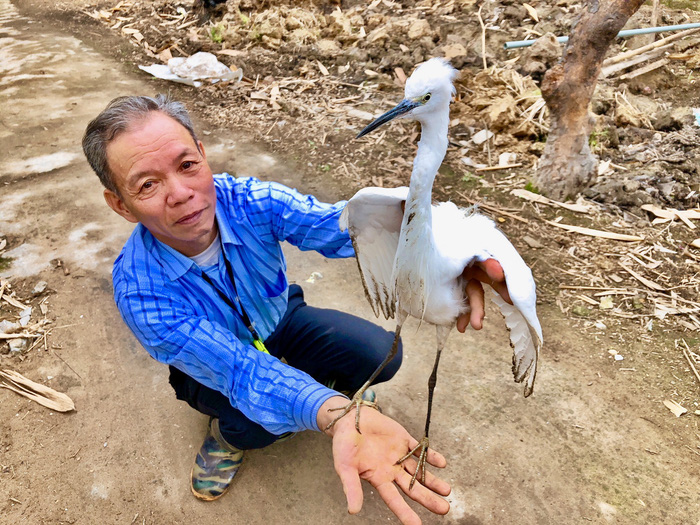 As harsh weather rocks Vietnam’s northern region, storks are taking refuge on local farmland, sparking a bond between the birds and the farmers who see it as an opportunity to protect them from poaching.

One of those zealous farmers is Bui Van Tai, from Vi Giang village, Thai Binh Province.

Since the storks first arrived on his land, he hasn’t been able to stay away from the majestic birds.

Despite torrential downpours and heavy winds, the storks seem unwilling to leave Tai and his farm.

It’s a situation Tai wouldn’t trade for the world.

Providing a natural habitat to dozens of storks isn’t without its challenges.

Trees must be planted, the environment must adapt, and the birds must be reared.

For Tai, those challenges are well worth it to ensure the storks are safeguarded against poaches from nearby locales.

Though he’s not always able to protect the flock from danger, he does his best to act swiftly.

In 2015 a storm ravaged his land and blew away his protective fencings, along with many of the trees the storks were living in.

It wasn’t the storm that was most damaging to the birds. It was the human-made aftermath.

“We saw the poachers waltzed in and harvested my storks in droves, but couldn’t do anything”, Tai recalled.

For the past 20 years, Tai and his family have been on high alert, especially during the night when poachers think hunt the birds without getting caught.

Every time a gunshot is heard, Tai immediately rushes to the rescue, even if it means coming up against young poachers willing to put up a fight.

They never stop coming. Recently, some have even started putting silencers on their guns to keep a low profile,” Vu Thi Lan, Tai’s wife, shared.

But their hard work is paying off.  Due to the couple’s dedication, their flock now numbers well into the thousands.

But that also means more security measures must be taken.

Tai uses his own money to set up a bamboo fencing around his land and has installed 16 security camera to monitor for poachers.

The spark with storks

Like many others, Tai is just a normal, salt of the Earth farmer.

In 1994, he was granted four hectares of land for farming and livestock.

Four years later, some storks began visiting his farm. Then more and more. Eventually, there were thousands.

Tai built bamboos structures for the storks to rest on. His good deed was then rewarded with even more storks visiting his farm.

At one point, the storks stopped visiting for five months straight, prompting the farmer to clear the bamboo in order to make space for more farming.

Fortunately, he hadn’t got far in his plan when the storks immediately began returning in droves.

“I decided never to destroy their habitat henceforth.  Instead, I do my best to enrich it,” Tai said.

Since then, his land has become a breeding ground for the birds.

Another struggle with paperwork and funding

Word of Tai’s stork reserve spread like wildfire. Before long, droves of sightseers and officials began visiting Tai’s land to see the birds.

Many were moved by his selfless act and promised to help him out with a stork preservation project and the relevant paperwork for the undertaking.

Unfortunately, their words were just that – empty promises with no follow-through.

With every passing storm, Tai was offered encouragement and not much else.

“I honestly wish the project could be finalized so that the storks are properly protected,” Tai sighed.

Nguyen Xuan Dien, chairman of the local People’s Committee, disclosed that the project has been taken up by the provincial administration, “but land reallocation and funding pose quite a serious problem.”

The innate fear of stork extermination

Bui Thanh Bay, a farmer in a nearby village, also shares an unbreakable bond with the storks.

In July, 1989, a flock of storks took refuge on his land after a passing natural disaster.

Initially, he and his brothers tried to catch them for meat, but eventually they came around to the idea of protecting them.

“Many approach me for a deal, but I turn them down every time”, Bay said.

“I raise them because I love them, not for economic purposes”.

His wife also revealed that some years back, there was a quite hefty proposition made to purchase the land, but he fervently denied it for the sake of the storks.

Because of this, many have regarded him as “sick in the head”.

But he bats it off, claiming he is the last defense for the storks.

Despite his rigid commitment, some still try to snatch the storks from Bay.

They even go so far as to employ guns and sometimes shotgun cartridges to hunt the storks.

Quan, chairman of the local farmers’ association, also stresses the importance of preserving the stork body.

But the financial dilemma remains as much a crisis as ever.

“We can only rely on the provincial government to pass preservation regulations,” Quan remarked.