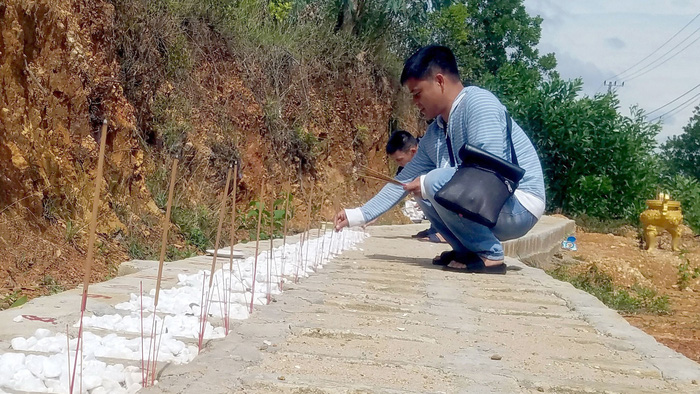 A Vietnamese man from the north-central province of Quang Tri has created and taken care of a graveyard where he and his wife would bury and mourn unborn children, using nothing but their own savings.

Vo Huu Hanh, 39, spent a few hundred million dong buying a piece of land in the provincial capital of Dong Ha to build a solemn cemetery for aborted fetuses to rest in peace. (VND100 million = US$4,280)

Every time he finds an unborn child, he buries him or her at his graveyard, before lighting incense to pray for their peace, a common Vietnamese practice.

The cemetery, spanning around 250 square meters, is located in the eastern suburban area only three kilometers from downtown Dong Ha, making it easy for people to visit.

To make the place even more accessible, Hanh has put up a sign saying, “A place to bury unborn children,” plus a note that reads “Charity, for free,” to make sure people do not worry about the financial aspect if they want to have their unborn children rest here.

Understanding the importance of paying respect to every deceased person, Hanh always does his best to help people in need.

At 5:30 am on a chilly morning in August, Hanh received a phone call from a young woman.

As the woman was crying despairingly while whispering in a hushed tone, Hanh was quick to realize what that phone call was about.

“Where is the baby? I’ll be right there,” Hanh said without hesitation.

Upon being told of the location, Hanh did not think twice but got on his motorbike, without having breakfast, and quickly drove to a stranded land piece near the provincial general hospital, where the woman left the unborn child.

Hanh was paralyzed for a while after he saw the baby.

“The fetus, already wrapped in towels and left on the ground, was in the shape of a baby,” Hanh recalled.

“He or she must have been at least five to six months old.”

But such a horrifying scene is not uncommon to Hanh, who is no longer overtaken by fear.

The sadness and sorrow, on the other hand, still remained.

He wrapped the cold body in the towels and held the baby back to the cemetery to be buried and paid respect.

Around 40 fetuses have been buried here since the place was built.

The land is divided into small rectangular shapes adjacent to one another, each for an unborn child who, for a reason, will never see sunrise.

Each rectangle is marked with a number which helps the 39-year-old keep a record of when and where he found the unborn child, in case their beloved ones want to pay respect to them.

To Hanh, each fetus found is already a person with a soul and thoughts.

Hence, after burying the body properly, he lights a joss stick to pray for the soul to find peace.

“I know that sometimes the circumstances are unavoidable, and there is no other choice, but every time I bury an unborn baby my heart aches,” he said, apparently referring to those people who resort to giving up on their fetuses.

“That is also why I bought this land in the first place,” he shared his deepest thoughts.

"Even though these babies haven’t been born yet, they still have a decent place to rest in peace.”

Unborn children smiling from above

Vietnamese usually light incense on the first, last and 15th day of every lunar month to express their consideration and respect for their deceased beloved ones.

Hence, on the last day of the previous lunar month, Hanh and his wife found themselves at the cemetery with flowers and offerings for the unborn children resting there.

This is something the couple has been doing for the past six months, ever since the cemetery was in place.

The night was approaching, making it harder to see anything but the lit joss sticks marking each grave.

As the couple was standing in front of the graves, Hanh told his wife he did not want to leave just yet.

Usually, relatives of the deceased pay homage to them by lighting incense, but these fetuses have been here for the past six months yet no one ever came to visit them, says Hanh drearily with a sigh.

Even though the only source of income for the family of five is from the couple’s used motorbike store, they did not think much about spending a huge sum of money from their savings buying the land and building the graveyard for these poor souls.

The couple is also trying to save more money to build a wall surrounding the area to prevent animals, especially farm cattle, from entering the sacred resting place.

According to Hanh, ever since the couple built the cemetery, many people contributed money to support the couple in buying joss sticks for the unborn children.

Most recently, after having learned about the good deed Hanh is doing, one of his friends contacted him to offer to give a hand in taking care of the graveyard.

Another friend who works in mobile repairing also insists on helping the couple bury and look after the graves.

“When we read these messages, we are touched to see that others appreciate the good deeds we do. If the buried children knew there are still many decent people in the world, I think they would be moved,” Hanh said.

Le Thanh Phuc, a 55-year-old living near the cemetery, expressed his respect for the couple.

“They are young but filled with love. They look after the graves like their loved ones were buried,” Phuc says.

Vietnam’s abortion rate is the highest in Asia and ranked fifth in the world, according to 2017 WHO data.