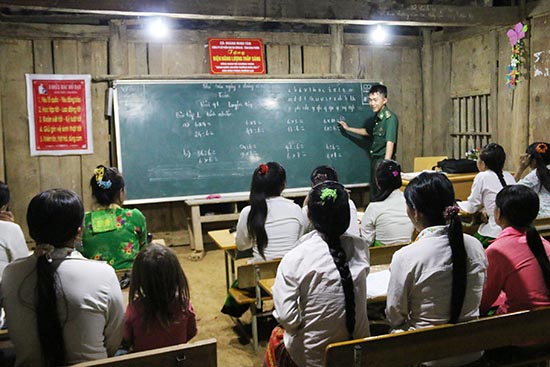 First lieutenant Vang Lao Lu was recognized as one of the ten most exemplary figures of Vietnam's border guard force in 2017.

The 29-year-old officer is willing to live in the most remote areas of Vietnam so as to teach people, especially indigenous people, to read and write.

Vang Lao Lu was assigned to the border patrol unit near Co Muong Village in the northern mountainous province of Son La in January 2017, shortly after which his charitable class came into being.

The mountainous villages across Son La are home to many indigenous minorities, one of which is the Hmong, and where the literacy rate is among the country’s lowest, while the poverty rate is one of the highest.

Co Muong, where there is almost no phone signal or electricity, is located 12 kilometers away from the nearest Muong Lan border patrol post, where the young lieutenant works.

That does not sound as a significant distance, but it takes almost two hours to travel between the locations due to the low-quality infrastructure.

As a voluntary teacher, Vang Lao Lu lives and teaches in a small, local house which consists of two parts. The larger one is used as a classroom, while the smaller one serves as a common bedroom Lu shares with other teachers.

Even though the young man is generous enough to run a class for those who cannot read and write, not many were interested as the ethnic minority still does not acknowledge the importance of literacy.

When the first announcement of the class opening was posted, only 22 people signed up to the disappointment of the enthusiastic ‘teacher.’

Lu was upset, but the negative feeling did not last long as he understood the mindset of many people of this region.

Instead, he went from door to door, from family to family, to encourage people to participate in his class, so he can teach them how to read properly, while explaining to them the importance of reading and writing.

“Many girls were born in 2001 and 2002, meaning they are now 16 and 17 years old, but their parents do not want them to attend school,” Lu said, adding that this is because ethnic people believe only the sons will stay with them while the daughters will get married and move away.

“Some even argued whether eating paper can make up for a meal,” the young lieutenant said, implying that the Hmong people still prefer working and earning money rather than studying for a degree.

In addition to full-time students who attend regular classes during the day, the oldest student is 38 and the youngest student is 15 years old.

For the first four months the class was held, it did not even have electricity. The classroom was lit by two small battery-run bulbs, and each student had to wear their own headlight like miners.

It was not until September 2017 that a generous benefactor donated a solar electric system to provide power for the night classes.

“Even they are all tired after working for the whole day, these people still make an effort to attend the class until 10:00 pm,” Vang Lao Lu said.

“Since I know everyone is exhausted, I try to tell jokes and funny stories to make them laugh so that they will be more interested in the lesson.”

Lu said teaching Vietnamese how to read and write is simple.

“While I only need to have students write with no spelling mistakes, teaching math is more difficult as most concepts in this subject need to be taught more than once,” he said.

Sympathizing with the poor

Having grown up in a poor family, the young lieutenant sympathizes with people of the Co Muong, which gets him even more attached to the mountainous villagers.

“I grew up in a family of four children that did not have enough food to eat,” he recalled.

“Being the oldest child, I always had to leave the food for my siblings and my elderly grandparents.”

As a child, Vang Lao Lu would set out to school on foot at 4:30 am every morning with an oil lamp on his hand to push away the darkness.

Every morning and afternoon, the young Vang Lao Lu had to cross roads, mountains and streams to reach school.

Despite having to walk for a long distance, the young boy did not have shoes until he went to junior high school because his parents could not afford them.

“I grew up in poverty so I do not want children here to go through what I did,” he shared.

Vang Lao Lu believes that the best way to improve the living conditions of people in this area is teaching them how to read and write so that they could reach out and gain knowledge of more recent inventions in their area of work.

“I am showing people here that one needs to work and learn to make a living, and to be able to escape poverty,” Lu explained.

His efforts are truly appreciated in the area.

Seeing Lu having to live in the modest house in the mountainous village, Giang A Le, the father of one of his students, offered to ‘adopt’ the teacher into his family.

“You are living here all by yourself. I feel sorry for you. I have four children, you can be my son,” the 58-year-old man told Lu to his disbelief.

Le made a celebration to welcome Vang Lao Lu into his family while giving Lu a new name – Giang A Lu – and a new birthday, which was September 28 – the day Lu was welcomed into the new family.

“Each day when I get to do something nice for the people is a day not wasted,” Lu said