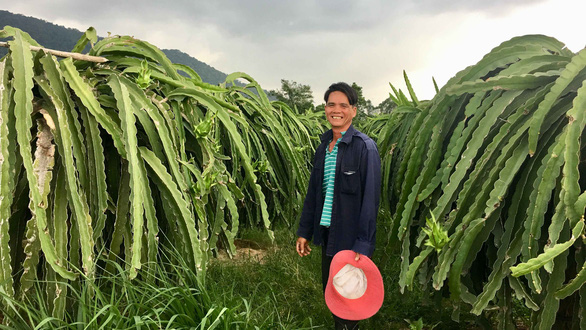 Released from prison 11 years ago, abandoned by his wife, and flat broke, Tran Van Dan now sits on a small fortune he has made out of his dragon fruit plantation in south-central Vietnam.

Eighteen years in prison is a long time by any standard, but when you are only 23 years old and just beginning to build a life, it is an eternity.

Tran Van Dan realized that pretty quickly after being convicted of murder in 1997 and sentenced to 18 years behind bars.

“I just had a new house built. The builders and I were throwing a party at a karaoke bar and a stranger stormed in and tried to take the karaoke room from us,” he explained.

Little did he know that the celebration would lead to divorce and more than a decade of separation from his three-year-old son and newborn baby.

“There was a big fight and the builders beat up the guy," Dan said.

"I backed off and was cheering on the builders.

"I didn’t get involved in the fight itself.

"Who could have imagined the man would get killed?”

Dan was convicted of murder for his role in the incident and found himself in Z30D prison in Binh Thuan Province, south-central Vietnam.

“I felt awful for my children. Their father was in jail and their mother left them. They were abandoned,” Dan said.

Dan was known to the officials at the Z30D prison as a trustworthy and well-behaved inmate.

His good behavior eventually helped him get promoted to the head of a team of inmates, and contributed to the prison board choosing to reduce his sentence on three separate occasions.

All in all, he spent ten years of his 18-year sentence behind bars and was released in October 2007.

Only his mother, younger sister, and youngest son greeted him upon his return to home.

His sole assets were the piece of land with his deserted house on it and VND2.9 million (US$124) given to him by his former employer.

Determined to find his feet, Dan spent VND2 million ($85) clearing all the debris from his land and asked his sister-in-law to take out a VND10 million ($430) bank loan on his behalf.

By day he planted the 400 dragon fruit stems he had bought with the money from the loan and by night he worked in sand mines located in nearby mountains where he was paid VND45,000 ($1.93) for every three cubic meters of sand he dug.

Such exhausting work for such a low income sent him into frequent states of depression, but Dan always made sure to keep himself together and stay on track.

He eventually married Nguyen Thi Hang, a widow with two sons who contributed 600 stems to their dragon fruit business.

This ‘merger’ put the couple on course for big earnings.

“We were meant for each other. He really is a family man. He works hard and never parties. He loves my children as his own,” Hang said.

Currently, they own a 5.5 hectare dragon fruit plantation boasting 3,500 stems.

Dan does not care about himself or his family alone, but values his employees as well.

He even set up a house for the workers on his plantation and built a small bungalow to offer free accommodation to an elderly couple he met in the hospital.

Occasionally, he returns to the Z30D prison to attend meetings and give talks about rebuilding life after prison.

“We should only err once. The first time can be a slip, but a second or a third time means it’s your nature. You’ll lose respect from everybody,” he said.