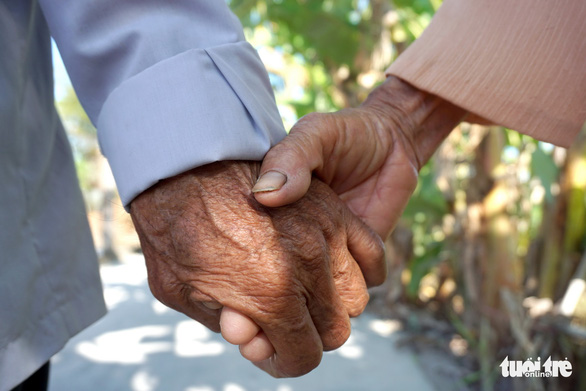 In a simple house in the heart of a Barbados cherry plantation in the southern province of Tien Giang, away from all the noisy and busy life, a Vietnamese couple has been together for more than half a century and just had their 55th Valentine’s Day together last week.

Looking at their 55-year marriage, it would be impossible to believe that Huynh Van Bau, 88, and his wife Nguyen Thi Cuc, 78, came into union by sheer coincidence.

Bau is a war veteran who was really into music, and he still now is, while Cuc was a gorgeous tailor.

Their lifelong marriage is a result of matchmaking, which took place when the man returned from the battlefront. After getting to know each other through a matchmaker, Bau and Cuc quickly wed without much courtship.

But it does not mean their marriage would not last long.

The couple has three adult children, who are now all married. After the marriage of their last child, Bau and Cuc decided that it was time to start spending their life in tranquillity, thus relocating to a humble house surrounded by Barbados cherry trees in Tien Giang’s Go Cong Dong District.

Although they are both reticent, Bau and Cuc try their best to support and care for their significant other just as much; should Cuc do the washing, then Bau will be in charge of cooking. There are no petty arguments to be found at all.

According to Cuc, her husband is only good at cooking rice. Therefore, whenever she has to leave the house for a few days, Bau would only eat rice with soy sauce or fish sauce, which Cuc feels is all her fault.

But what Bau fails to do in cuisine, he does it well with music. Under the pseudonym Huynh Bau, he has composed countless songs of a traditional music genre of southern Vietnam.

Though Cuc is no fan of music, she respects her husband’s passion and never ceases to support him.

After more than half a century in each other’s companion, the couple knows all too well their srengths and weaknesses.

Even so, sometimes they still get into heated arguments. But once this occurs, one of them chooses to remain silent to cool things down, before they both take a step back to lend an ear to the other.

Happy as they are, both are aware that they are quite old, and that their clock will stop ticking any moment now. Then again, Bau and Cuc are not afraid of the inevitable, claiming that they have fulfilled the other with the best they have got.

Even so, Bau admitted that every time the question of life and death is raised, he still feels hurt deep inside thinking he or his wife will have to continue the rest of their life by their lonesome when that day comes.

The two are great advisors when it comes to marriage.

The key to a lifelong commitment both of them agree upon is respect: respect your soulmate, share responsibility, and always remember to take a step back once dispute arises.

For two strangers to become lovers, and then husband and wife, they must accept each other for who they are, not who they want them to be.

While it is easy to fall in love at first sight, one needs responsibility and seriousness to keep the relationship long and worthwhile, according to the couple.

With all said and done, let us take a look at Bau and Cuc’s daily life, and figure out to ourselves the secret to a long but in no way dull marriage: