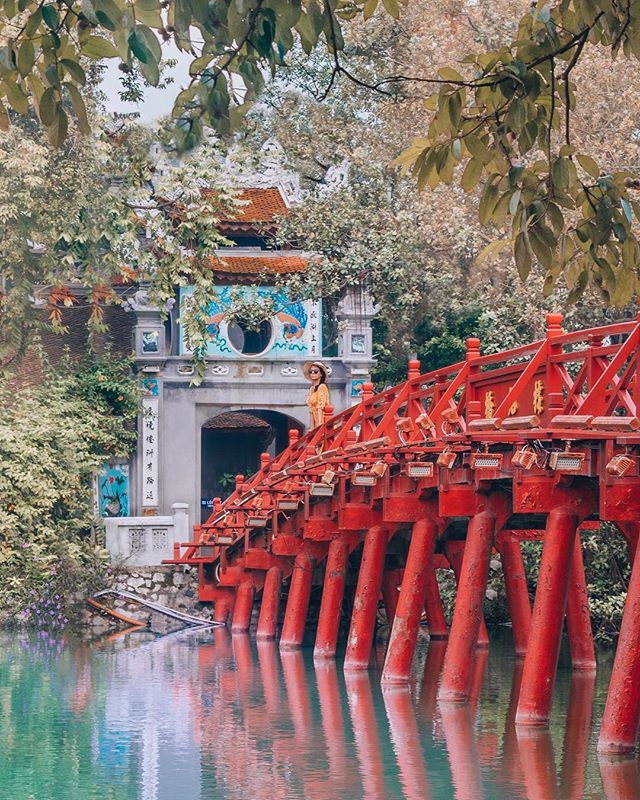 Vietnam is steadily climbing the ranks of hot destinations for travel bloggers from around the world, including Kelsey Madison and Ayda Izadpanah.

Photos posted to their respective Instagram handles are opening a window for thousands of followers into the beauty of the Southeast Asian country.

“Let’s live colorfully!” reads Ayda Izadpanah’s bio on her Instagram profile @ayda_june, where she wows followers with dozens of photos which give off an almost fantastical appeal.

The Iranian-American travel blogger not only introduces the places she visits to her 77,000 followers, but also uses the photos to transport her fans into a colorful wonderland.

“Did you know that Hoi An is one of the most romantic places in the world?” the traveler wrote in a post about the ancient town in central Vietnam late last year.

In January 2018, Izadpanah and her boyfriend made their first trip to Vietnam, adding the Southeast Asian country to the list of 27 countries they have visited over the past two years.

“We have friends from Vietnam and they made it sound wonderful,” she told Tuoi Tre News.

“We were not disappointed and came back for the second time later."

During her trip to Hanoi, Ho Chi Minh City, Da Nang, Hoi An, and Hue, Izadpanah said she realized there was “so much to see within the country and it never gets old.”

“There is a big sense of community, especially in Hanoi, which is so refreshing to see,” she commented.

According to the 31-year-old blogger, her photos from Vietnam are her most popular thus far.

“There has been a lot of traction from them and I know it has persuaded people to make trips of their own to the locations I posted about,” Izadpanah shared.

“It is an honor when I receive messages from people telling me that they booked a ticket to visit Vietnam because of my photos,” she added.

Besides clicking “like” on her photos, many fans leave comments saying they have already added those places to their bucket lists.

“We're packing our bags and hopping on a plane now! Such awesome inspiration to head out and explore the world!” igersworldtrotters commented on one of Izadpanah’s pictures of Hoan Kiem Lake in Hanoi.

Besides her Instagram account, Izadpanah also maintains aydajune.com, where she shares travel tips, detailed descriptions of destinations, and advice on earning an income while traveling.

It was almost two years ago that American Kelsey Madison chose to move to Vietnam.

Since then, her Instagram @milesofsmiles._ has become a window for her 13,900 followers into the country she has fallen in love with.

In November 2018, she posted a photo capturing Ho Chi Minh City’s famous tourist attraction Tan Dinh Church, dubbed “the pink church,” on Instagram and has attracted over 2,200 likes so far.

Not long after, travel Instagram handle @voyaged shared the picture to its 1.3 million followers with the caption “Have you seen this vivid architecture in Vietnam in person?”, attracting more than 31,000 to click the button 'like.'

Madison’s Instagram photos reflect her love of the gentle vibes exuding from every corner of Hanoi streets, every little coffee shop in Ho Chi Minh City, and every small window full of colorful lanterns in Hoi An.

Besides sharing about her life perspective and experiences, Madison also adds her knowledge about Vietnam to the pictures.

“In Vietnam early mornings are where all the best things happen,” Madison wrote in a post about her morning walk around Truc Bach Lake in Hanoi.

“Between 5-7am is going to be the best time to watch the bustle of markets. It’s when the breakfast stalls open and people are out walking their dogs,  Plus because everyone gets up so early, everyone takes a nap after lunch, and the nation shuts down around 1 for the midday siesta,” she added.

The woman, who has been to 18 countries, explained that she likes to include some information about the different places featured in her pictures to help her followers understand a little bit more about Vietnam.

“I think Vietnam feels very far away to many people, and I want to show all the people out there that Vietnam is not only a gorgeous country but full of unique places, and a rich culture,” she told Tuoi Tre News.

“Sometimes I am able to use my own experience or knowledge from locals to craft my captions, but other times it requires looking information up online,” she added.

Besides her Instagram handle, Madison has also operated milesofsmiles.co, where readers can research travel information about Vietnam, such as five must-visit places in northern Vietnam, the cost of living in Hanoi, things to do in Hoi An, a guide to Phu Quoc, and an “ultimate list of things to do in Vietnam.”

“Before coming to Vietnam I didn't know a huge amount about the country,” she recalled.

“I was excited to observe and learn about the culture, and it has been a wonderful experience,” she continued.

Her posts are full of positive comments from followers hoping to make it to Vietnam and explore the country on their own.

“I want to come back to Vietnam so bad,” zorymory commented on a photo of Hoi An lanterns posted by Madison.