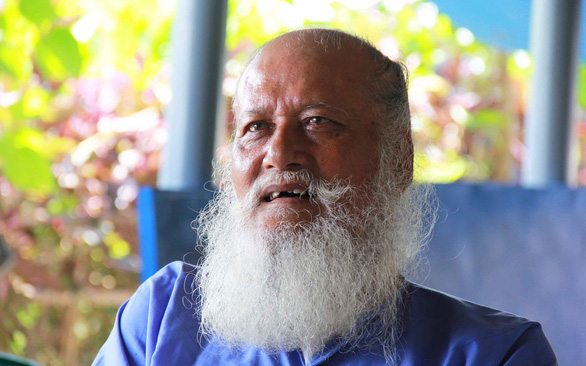 A senior citizen who has spent his life living on a small island off the central coast of Vietnam has big dreams to turn his hometown into a tourist hotspot.

Bui Hoang, an 84-year-old resident of Dao Be (Little Island) off the coast of Quang Ngai Province, hoped building a small bridge to let visitors to the island walk from the beach to a rock formation several meters from the coast would help bring more tourists to the island.

Dao Be and the larger Ly Son Island together make up Quang Ngai’s Ly Son District.

Bui Hoang first decided to build the bridge two years ago when a group of tourists told him that they wanted to witness the island’s magnificent waters for themselves.

Wanting to give that group of tourists and those he was sure would follow a special experience, he decided to build the bridge so that they’d have something unique to add to their time on Dao Be.

Bui Hoang shared that since its construction, the bridge has become a must-visit tourist attraction that earns him US$10-20 a day in entrance fees.

He uses that money to financially support himself so that he doesn’t need to rely on his children.

Bui Hoang’s idea to promote tourism seems to have caught on with other islanders on Dao Be.

In just the past few months, homestays, boat charters, scuba diving, and even night fishing trips have started popping up on the island.

Nguyen Loi, a29-year-old islander, is another Dao Be citizen who has followed in Bui Hoang’s footsteps to promote local tourism.

Loi, with help from other locals and tourists, has collected thousands of plastic water bottles and modeled them into a functional homestay.

The now-popular tourist attraction doubles as an important message conveying the need to protect the islands fragile environment.

“My bridge has inspired and motivated younger generations on the island to advance the quality of our hometown,” Bui Hoang shared as he discussed Loi’s house, eyes gleaming with pride.

In addition to his bridge, Bui Hoang also pulls in a steady income running a family homestay with the help of his English-speaking grandson.

The duo also plans to run an English course so that islanders are able to communicate with foreign tourists.

“I hope Dao Be will become world-famous one day,” he said with optimism.

Hoang’s efforts to put his small island on the tourist map have gone viral and received attention from international experts in travel development, such as Ashley Hollenbeck of the Institute for Village Studies, who hoped to help him realize his dream.

And if Bui Hoang can help Dao Be rise in popularity without losing its Vietnamese cultural values, that dream will have come true.

“He deserves to be the leader of this beautiful island with his bold desire for change and the unconditional love he has for his hometown,” said local researcher Chu Manh Trinh.